I hate so much!

I hate oatmeal for breakfast (so what if everyone I love likes it!).  I hate almost all television (I've probably watch less then ten minutes a month on average over the past thirty years). I detest what the Republican party has become. I hate consumerist culture and all the middle aisles of the grocery store. I hate rush hour traffic. I hate action movies or any movie that depicts graphic violence. I hate cruelty to animals, but I'm on the verge of hating PETA for their excesses (except for their clever use of nudity: I like that). I could continue this list (possibly indefinitely: it's great fun)...but isn't it more constructive and enlightening to share what we love?

Of course, you know I love plants. And books. But I'll share here what I really love in the way of movies!

I love anything by Wes Anderson. Especially... 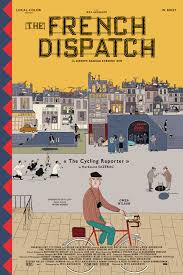 Click on that delightful parody of a New Yorker cover and you'll get a distorted taste of one of the most wonderful movies I've ever seen! The French Dispatch restored my faith in movies. Maybe in mankind. Of course, I love the New Yorker (albeit my subscription has lapsed...again) and dote on all things French (to a point), But at the same time I never suspected these two would provide a vast mine (or perhaps I should say mine field) of hilarious satire,

I mean REALLY! The New Yorker as a weekend supplement to a uber-provincial Kansas newspaper: how rich is that!? Romantic Paris on the Seine transformed into Ennui-en-Blasé? My heart leapt higher than a Moulin Rouge chorus dancer can kick!

I had to seek out the New Yorker review of the movie, which Bobby Ward (Secretary of NARGS and a dear friend of many  years) provided--click on the highlighted phrase to access it. I confess--I couldn't because I've exceeded my "free" access to the New Yorker! Fortunately Jan hadn't--so she downloaded and printed the review, which isn't as good as the movie [honestly, how dense has that publication become? In a perfect world (one without Trump for instance) they would have asked Wes to review it!] But at least the reviewer agrees with me that it's a wonderful thing.

I'll come clean: I've been pissed at the New Yorker ever since they launched the review of Denver Art Museum's Liebeskind expansion with the colossally arrogant dismissal of my home city of choice (Denver) as a "second tier" city. No doubt because Denver doesn't have the magnitude of bloated population, problems or baggage of the Big Apple, L.A., or the Windy City? As if the status of cities were gauged by the magnitude of their ineptitude and gross size.

I hope now that they've been humbled by Wes, they'll apologize--especially since Mayor Hancock has hastened to have us join those megalomaniopolises with unbridled growth and infill.

As for France--why does she deserve such a dressing down? Of course there are many Frances: there's Anatole France, the France of Toulouse Lautrec posters and the American expats and a real France that is immune to literary or artistic depiction or parody. This movie wallows and revels in the second of these Frances and her myriad clichés!

Okay, I admit there's a bit of schadenfreude in my love of the French Dispatch...

I loved the movie's truly novel cinematography, it's blatant and honest and fantastic artifice and artificiality that masks so well and yet so inefficiently its vast depths of pathos, compassion and love. Unlike the earnest classics we all love--the by now practically hackneyed Casablancas, the Godfathers and Spielberg, Tarantino etc. glossy monoliths, this movie is rococo, wildly slapstick, incredibly evocative in costumes, settings and story line, and ultimately....well...it's my cup of tea. Do take a sip!