Not exactly hidden: more like "tucked in" behind a large building, surrounded by pickleball courts and a parking lot...This picture of Pediocactus simpsonii was taken in early April..these pictures represent two visits several weeks apart. The garden has something new blooming every visit. Many somethings!
There will be little commentary from me: I've featured this garden many times on my blog. It's a little miracle creation that speaks for itself. The management of the grounds sprays weeds (in the case of this garden, maybe not weeds) I don't think they quite get it yet.

I grew this for years at Denver Botanic Gardens where it was regularly irrigated. And never bloomed. Here where it bakes and is stressed--well, you see! What a spectacular specimen.    `

A treasury! Quite literally!

I should explain...Ken Ray is the Treasurer of the Rocky Mountain chapter. He is a treasure of a gentleman for our chapter, not only because he does a wonderful job shepherding out treasury--but with a long history in business, he thinks "Big Picture" and nudges us all to do things right--but also to raise our sights and aim higher! He's been a dear friend and fellow rock gardener for more decades than either of us will confess to. And I must confess that I don't know for sure what the magnificent crucifer is in the picture above!
Believe it or not, this is the very same plant just under a year later: Looks like it's even bigger! Two more different Springs I can't imagine: we had winter up to early March (snow every week) and now six weeks with no precip! Until last night... 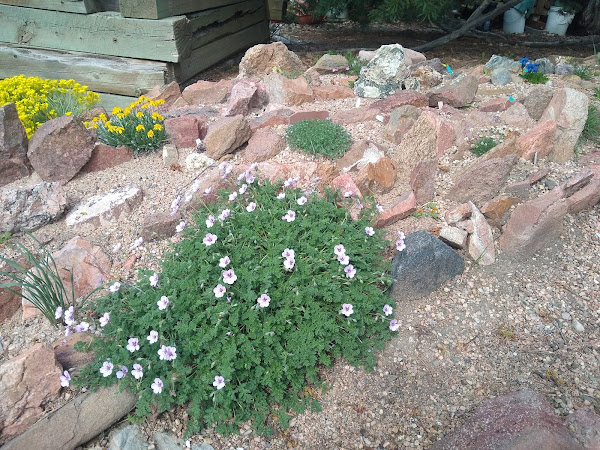 Not to embarrass my friend: the plant above is much cleaner than the one below because it's 1) several weeks more growth and 2) Ken has been crazy busy with Plant Sale and his numerous interests that cleanup hasn't quite been up to snuff (and six weeks of dry weather didn't help). Compare rocks--it's the same plant--but notice how much darker the flower? (My finger in the upper left is a bonus, btw). 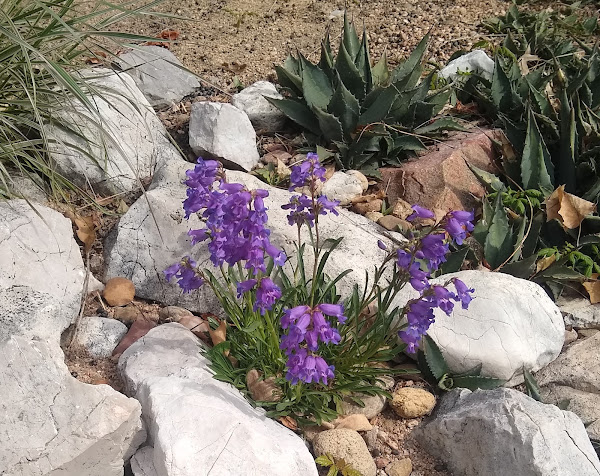 And a picture perfect Penstemon hallii, Colorado's cousin to the last species.
Whichever of these three this is, it is a superb specimen. I forgot to examine it up close to know for sure--but I'm leaning towards Tonestus...rarely seen in gardens of any kind.
A perfect specimen of cutleaf daisy

The wonderful Physaria lookalike from Dalmatia: an example of parallel evolution between Steppe and Mediterranean climates.

A closeup of the mystery daisy from earlier in the blog: I suspect it's Tetraneuris acaulis...from this angle.. 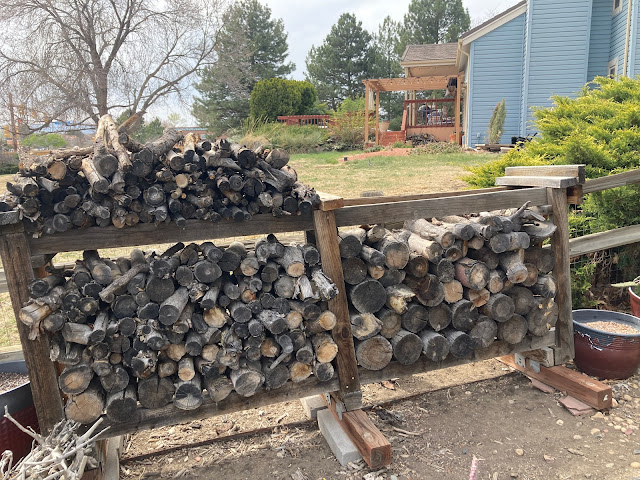 Even Ken's woodpile is nifty...I am so embarrassed: all these closeup shots.. That house is the nearest house to the Rays: they purchased their lot at a time when they had a pick, and theirs is on a peninsula, so to speak, at the end of a cul-de-sac. Just this neighbor to the west and across wide streets to the east and south some distant bungalows...and most of their view to a very broad South is of a large park, a lake and woods and the Rocky Mountains. A lucky guy!
I was admiring my own Amsonia this very day--the usual steely blue color...but I was stunned when I saw this pure white flowered form! I hope against hope it roots from cuttings! My wanny! 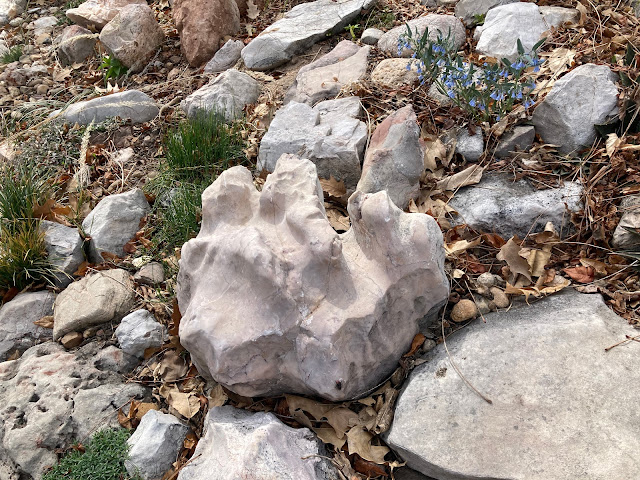 The Rays have a cabin and property in Southern Colorado which is the source of the rock for their gardens: I was enchanted by this holey rock: riverworn limestone--but it looks almost like a dinosaur fossil head! Notice the Languid Lady right top?
This is our precious prairie Virginia bluebells (I prefer Languid Lady)--which thanks to Raven Ranch I finally have in my garden. This grew in all the vacant lots of my childhood (all of which are now ridiculously overpriced megamansions--don't get me going!)...also don't ask me what I think of the myopic "botanists" who have lumped all the diminutive subalpine and montane species in our state under this rubric: there is a special ring in Hell for them.
I can almost smell this on my computer: the fragrant hybrids and the Korean spicebush--Ken has a wealth of goodies tucked here and there! 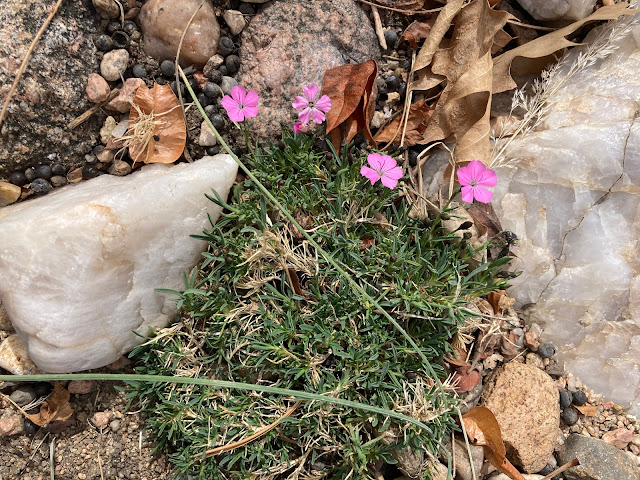 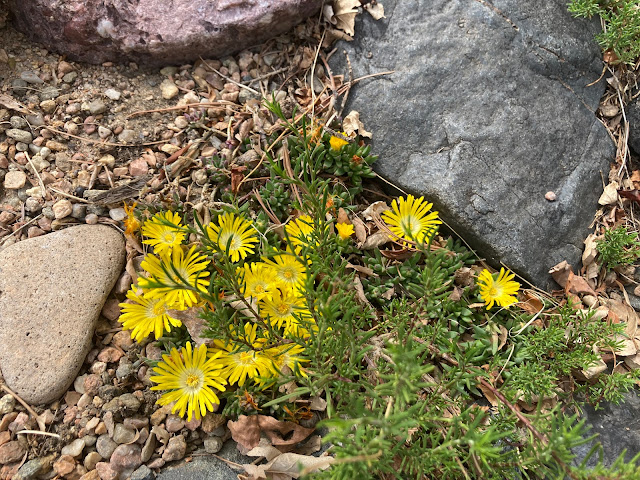 And here is the man himself: Ray joined our Rocky Mountain Chapter in the 1980's and ended up with an enormous role at Alpines '86, the International Conference we staged in its namesake year--handling much of the registration and hospitality. He was still working a demanding Corporate job at the time (U.S. West) and only became active in our group in the last decade upon retiring when he assumed the role of treasurer, which he fulfills with punctilious care and promptitude.
Last year he was instrumental as part of the team that staged "At the Edge of the Rockies"--NARGS A.G.M. which was a resounding success (staging a 200 person conference in the middle of a Pandemic isn't for sissies!)
He is now sorting through the mounds of data left after our Chapter partnered with the Colorado Cactus and Succulent Society for a three day show and sale that attracted 1600 people and sales in the six figures (lower six figures I hasten to add!)
Through it all he has kept an unfailingly charming demeanor. Rock gardening is just one facet of Ken's rich life: he collects art, is an avid fly fisherman, he's a connoisseur of wines and other spirits and is deeply engaged in many other facets of the community. And yes, he has a lovely wife, Mary and two dynamic children with families to whom he's deeply devoted.
I share this portrait of a friend and a gardener as a personal token of gratitude for the tremendous guidance Ken provides me with, not to mention fun times!
Alas, his garden is in the far northwest quadrant of the Denver metropolitan area (I live far to the south and east). Otherwise I'd have far more, far better pictures of his many treasures! (But these weren't bad at all, were they?)
- May 02, 2022 1 comment:

I have had the privilege of seeing spectacular cactus shows all over Southern California--not to mention Philadelphia, Connecticut, Kansas City and Boston. (Although I have yet to attend the near mythical "Intercity Show"  in August at the Los Angeles Botanic Garden that has well over a thousand spectacular entries.) Wouldn't you know, last weekend was the first time in YEARS I had not entered a single plant in our Colorado Cactus and Succulent Society's show--and I think it was the best show ever (is there a connection?) I thought you'd enjoy seeing some of the Best in Show specimens! Do be sure to attend one of the dozens of shows across the USA and Canada (and likely Mexico as well). I know Great Britain does Cactus and Succulent shows superbly as well!

Of course, partly because of its rarity and large size--but mostly because it was grown so well, this specimen won a bevy of trophies as you can see including "Judge's Choice"! as well as first place for its grouping (Pediocactus, Sclerocactus etc)
In addition to a first in its class (Mammillaria) this won the coveted Dana Such award: one of our treasured members recently lost to cancer whose Mammillaria collection was the finest in our region.
I like the pot almost as much as the gnarly cactus! This one winning the Jim Sykes trophy--another treasured past member who participated for decades showing fabulous cacti: this was deemed the best cactus in the whole show.

Another coveted ribbon and a trophy named for Mary Ann Heacock, the founder of our club and one of my mentors and beloved friend who passed away at nearly 100 years old a few decades ago. She was a world renowned Haworthia collector, and the trophy is for the best Haworthia.

What a stunning irridescent color on this! Russell seems to have a habit of winning this trophy!...
This won the Lynn Wilson trophy for best succulent. I love looking at the past winners whose names are engraved on the trophy for many years back--so many great growers in the club whose memory is cherished.

This perfect specimen is 20 years old: it won the Jerry Sochor trophy for best winter hardy cactus at this show. 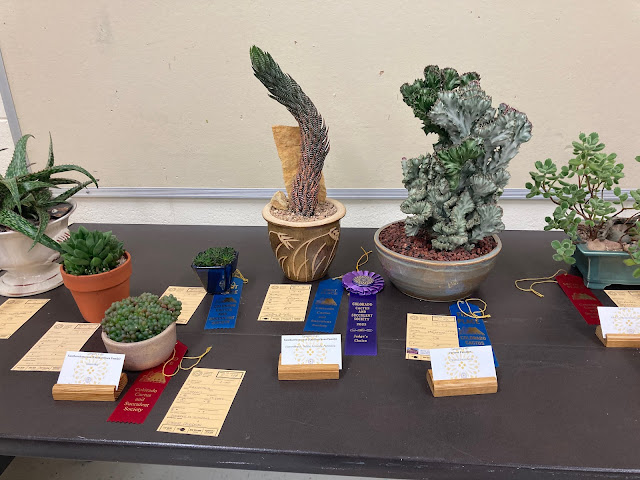 I concentrated on the trophy winners and those with special ribbons above, but you can see there were plenty of fantastic specimens and blue ribbon winners in many classes I simply don't have the time or patience to depict individually: wish I did they deserve it!
Notice that every one of the winners above was a different grower: what is perhaps most surprising is that some our very best growers were not represented in the on the trophy benches--a tribute to the depth of talent in the Colorado Cactus and Succulent Society, and in the incredible organizers of the show: Roswitha Moehring and Harriet Olds in particular have put in countless hours preparing for the show, passing plants, preparing the trophies and ribbons and making it come together.
And dozens of club members stepped forth with plants on which they have lavished years--often decades--of care and attention. These plant shows are spectacular! I regret not entering this year and will be doubly anxious to groom some specimens that I think might have merited to join these at the head table (something that I've achieved a few times in the past...with great pride!)
And I have to give a special note of appreciation to the Chairman of the whole event and President of the Colorado Cactus and Succulent Society--Scott Burkholder. We both channeled wearing our "brotherly" shirts on Sunday [honest--we didn't coordinate it--we both have a LOT of different shirts: it had to be fate]. As president of the local Rocky Mountain Chapter of the North American Rock Garden Society, we partnered for the first time in selling plants at this sale, largely thanks to Scott's open mindedness and big heart.
Scott's not only president of CCSS, and Show chair, he produces the newsletter and chaired the whole show: I sincerely hope some of our CCSS members step up to take over some of his responsibilities--a club that can produce that kind of show ought to have more than one great leader!
Meanwhile I am stunned that having produced nearly 1000 blog posts on Prairiebreak alone, I am shocked that I've never "done" our local CCSS show before. I've marveled and attended these shows for over a half century. Most of the trophies in this show are people who were dear friends. I blush to think I am by far the most senior member of the club (I first attended a meeting nearly 60 years ago, not long after the club was formed as a teenager accompanying my brother-in-law who was at the height of his succulent enthusiasm back then), I didn't become an active member until the 1980's, but I cherish the thought that I was "there" back before Denver Botanic Gardens built it's Education buildings where we've met for decades (the club originally met at the old "Horticulture House" next to the Byer-Evans Mansion in the very epicenter of our city. I may be one of very few people living who attended meetings in that building or who even knew it existed!)
Such are the joys of getting older--and sticking to things like cacti, succulents...and in my case also alpines, steppe plants heck, the whole dang plant kingdom! I have been truly blessed to have been an acolyte of Mother Flora all my life.
- April 28, 2022 4 comments: