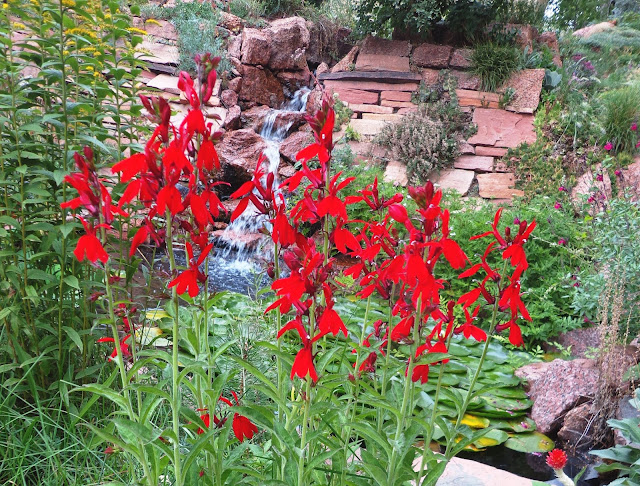 Years ago I spoke of "plants that haunt, that taunt and flaunt": the plant that best exemplifies that quality for me is Lobelia cardinalis. 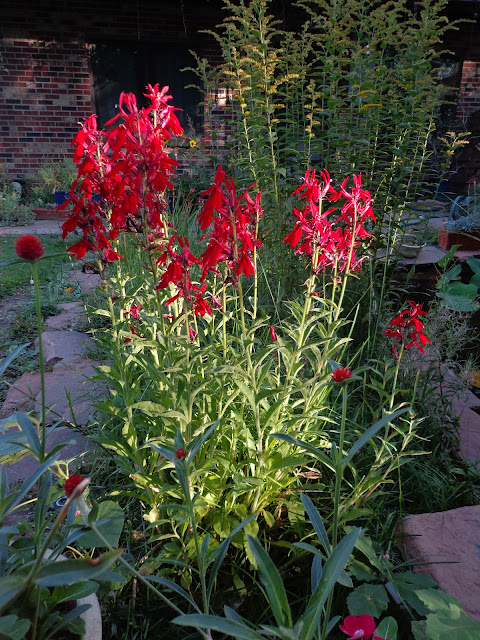 I first encountered cardinal flower in August of 1974 when I started Graduate School at Cornell: I had just moved into my first apartment in Ithaca (the less said about that the better) and one weekend day decided to explore "Cornell Plantations" (now called Cornell Botanic Gardens) -- a sprawling and diverse series of gardens near the campus. Late one afternoon, as I walked through a patch of woodland, as I turned a corner there were a stand of several dozen clumps of a tall, willowy perennial with screaming scarlet flowers glowing in the backlight. I remember standing there in awe: after I'd drunk in their amazing beauty I walked on, and a fellow was walking quickly past me with what looked like a hooded kestrel perched on his wrist. These two strange images will be forever wedded in my brain (even now--nearly a half century later!). 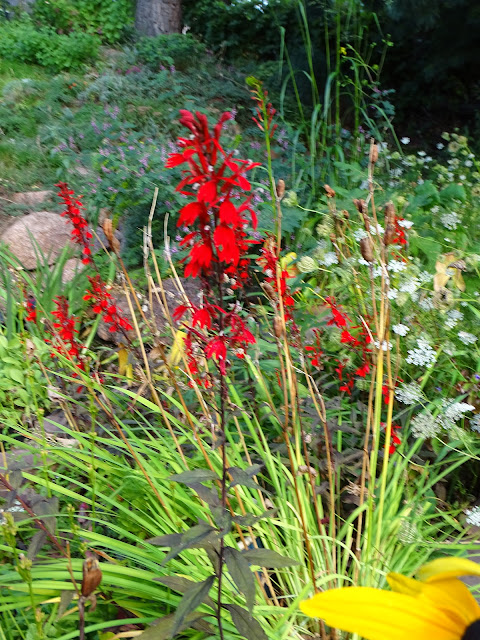 These images are all of various manifestations of Lobelia cardinalis I've grown over the decades a little bog next to the pond in my back yard where I have managed to capture at least a little glimmer of that miraculous first encounter over the last few decades. The first two shots were of hybrid cardinal flowers (the Mexican and Eastern species or subspecies crossed making a very clump. The above and next two shots are of a dark brown leaved selection called Lobelia cardinalis 'Black Truffle' PP25687 which I obtained from North Creek Nursery near Philadelphia: there are a few other dark leaved selections made by other nurseries as well. 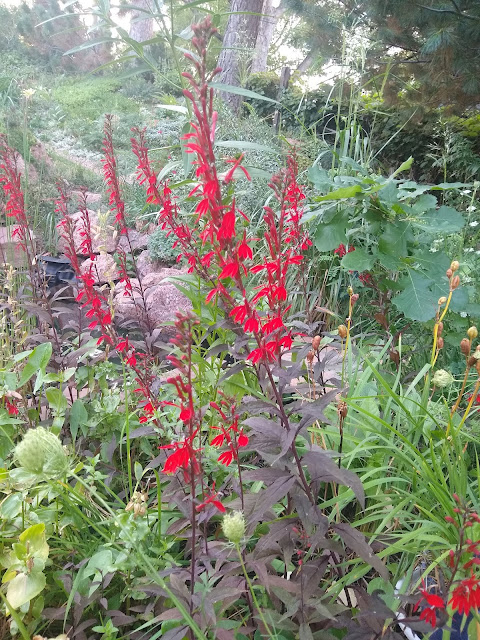 The dark foliage of this selection makes a wonderful foil for the brilliant flowers. 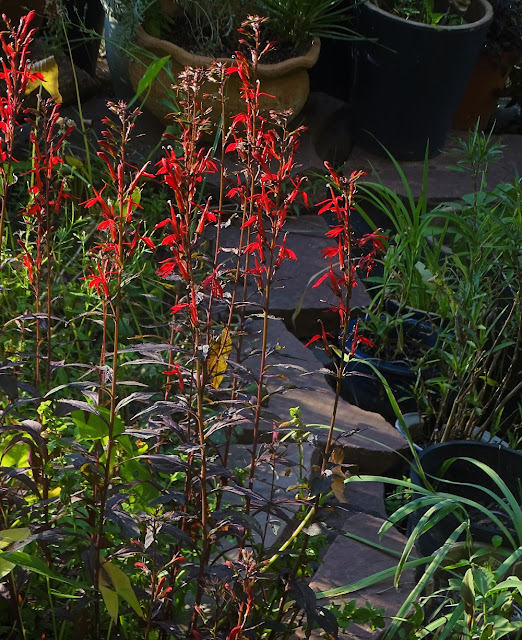 This shot is one I particularly relish! 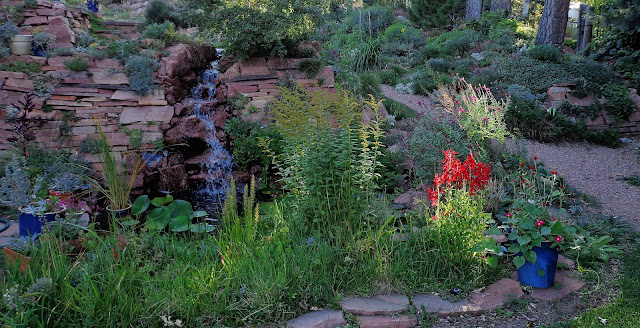 Here is a scene I took ten or more years ago of the hybrid clone that almost recreates my first encounter! 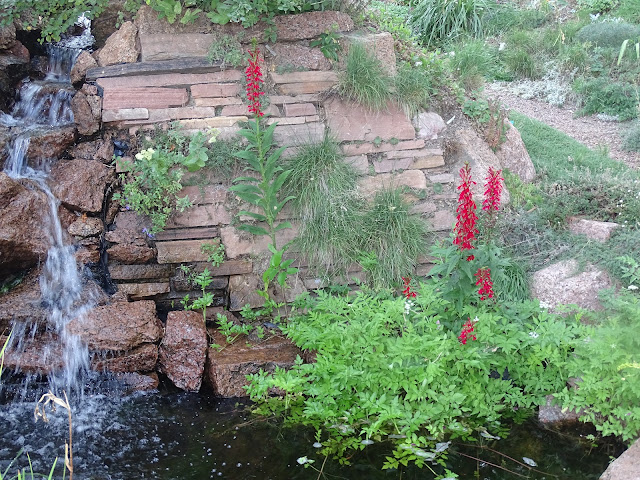 I have planted more at various times over the decades--each year a slightly different look! 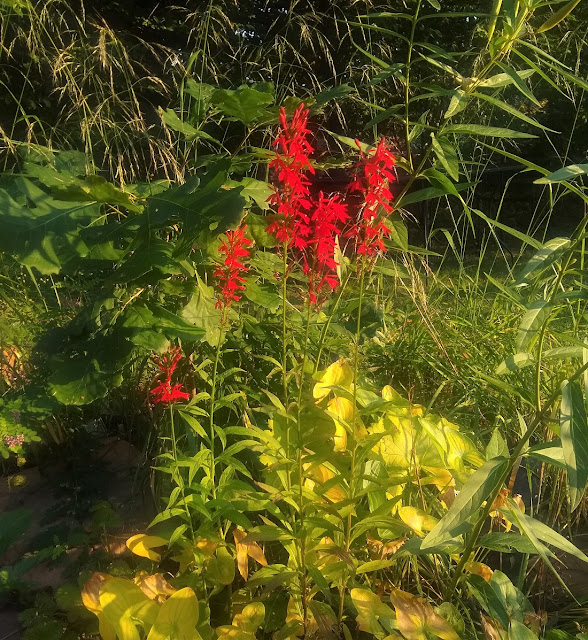 Here is my latest effort: this is a selection of the wild form collected originally from plants in the wild in New Mexico: I purchased this as two small plants a few years ago from Agua Fria nursery in Santa Fe. They also sold an albino flowered form of the same species--which I didn't get into the ground in time: perhaps I'll get have it again and one day I can see what a white specimen might look like in this spot.... or maybe not!

The only way I could improve on this display would be to invite a falconer to visit with a hooded kestrel! I did have a sparrow hawk visit my garden once--only on the west side of my house (this is to the east...) But one can dream!