The hardy Palm Trees of Colorado.

You can imagine my delight the other day when driving through Denver with Jan and our good friend, Michael Dodge we stumbled on this extraordinarily healthy specimen of hardy coconut (ironclad hardy I daresay). We stupidly didn't have our cameras with us, but Michael had his trusty I-Phone and was able to document this new accession for our ever expanding e-monograph. Thank you Michael! Notice the snow. Most impressively, we'd just had several nights BELOW ZERO Farenheit--if that's not hardy, I don't know what is.

Few people realize how many are maimed and possibly even killed by these hefty fruits. This plant in particular seemed have positively devastating pods--heavy as metal.  Perhaps explaining why more are not found in our gardens.

Palm trees are generally thought of as Tropical plants, restricted to humid, warm winter regions. Obviously, most people are not aware that there are many iron-clad species, such as this small colony that once grew along Monaco Avenue in Denver, a short ways south of Evans. Despite being planted in a rather exposed microclimate, with a deep sandy soil, these throve for many years: I would admire them as I drove by year in year out, their graceful, bending forms and rigidly proud fronds outstretched with an almost military rigidity: what's not to like? Then a day came when I noticed the sign....

It should have worried me that the restaurant where these where originally planted was rarely patronized...the pressures of development on our endemic urban Arecaceae cannot be overestimated. Not too many weeks passed by before I discovered they were now extinct. Surely the rarest Ironclad, silver Arecas in the region (if not the world) have now joined the Dodo and the Liberal Wing of the Republican party in the annals of prehistory. We cannot be too vigilant, nor can we trust in fly-by-night "conservation" organizations like Nature Conservancy and Defenders of Wildlife, who take little interest in these urban ecotypes. They'd just as soon see this planted to junipers!

Compare this sad sight with the glorious ecosystem that grew here before "progress" progressed! They may have painted it mustard yellow, and try to distract us with those signs--but surely you can see what's missing?

Possibly always rare, and now extinct in its type locality--this high altitude coconut palm once throve along Colorado Boulevard here in Denver--producing its characteristic clusters of fruit that fortunately never fell on passers by. 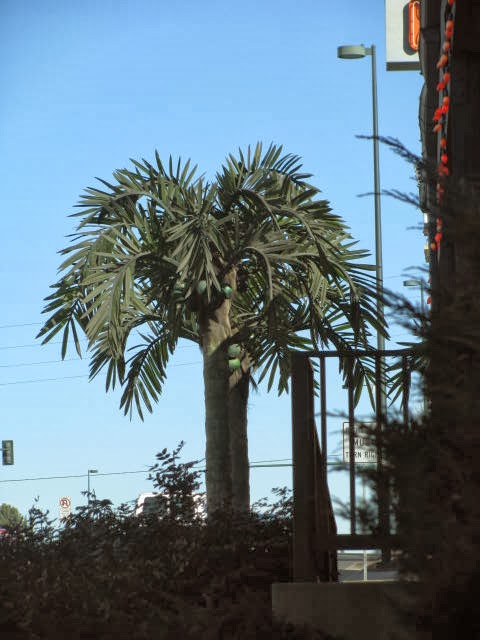 I admired the lofty crowns of this evergreen palm for many years, until it too fell victim to "progress"...


This delightful colony of an apparently sterile form of the genus still persists--possibly responding to the abundant irrigation on the lawn beneath. I hope some of those would be "environmentalists" will make an effort to preserve this thriving colony before it's too late for it as well!

I am somewhat concerned by the way these are growing that they may, in fact, represent a single clone--the bane of our street tree culture nowadays. By propagating so many trees from single germplasm accessions we reduce biodiversity to a single gene pool--and lay our trees open to all manner of disease and pests. I would not be surprised some day if some sort of rust were not to set in simultaneously on all of these.
Here perhaps you can better admire this distinctive variant planted near a rather outlandish stylized stone: The graceful organic form of the palm makes a striking contrast to the angular, metallic and rather unnatural "stone"--true art if I ever did espy it!