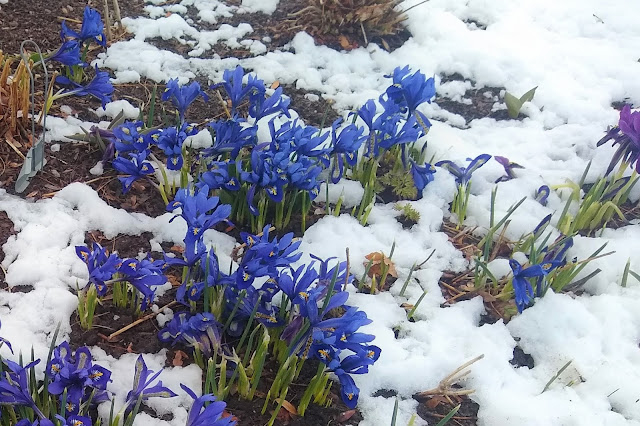 Spring snow is no stranger to Colorado: we almost always get snows in March (often our snowiest month: nearly 45" have fallen the last six weeks I read). April is often just as snowy. I recall several feet of snow falling in May in 2003. And many other years as well...

We joke about "white rain" and how it doesn't really do damage--except of course when trees are leafed out: We locals have seen enormous mountains of tree branches pile on the streets in front of every house on especially bad years.  Some trees are so disfigured they have to be removed.

A week or so after a bad snow, once things have been cleaned up, it is miraculous to see how gardens can rejuvenate. Except for a bent stem over here or over there you'd hardly even know...

Honestly, many of us wish the snows were gentle rains as you get in Maritime climates...but if we really wanted that, shouldn't we just pick up and move to a Maritime location?

Mass murders really don't have a lot to do with untimely snow--the snow after all brings moisture and a fresh snowfall can be simply gorgeoua: I remember a few days ago seeing a sparkling vista in my garden--the sun came out and the fresh snow on my garden shimmered and twinkled like diamonds! 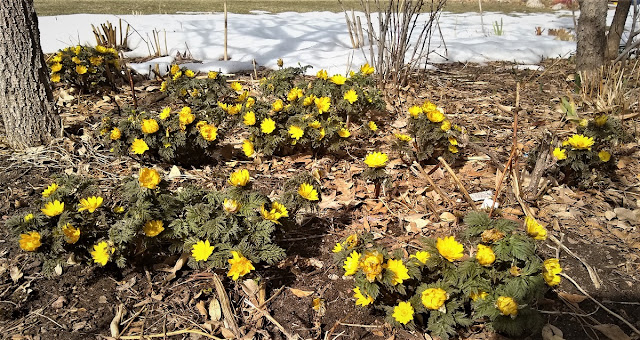 Time for another picture to distract you from the distressing subject: taken last week--the Adonis amurensis colony in my back yard under the  Chinese fringe tree came up mid January: they've been snowed upon eight or more times, last week over 27 inches and bounced back (the sow was exactly like styrofoam  one frosty morning). A month ago it dropped to -15F several nights, with a high one day of -3 and they had barely an inch of snow on them and they survived (the Christmas rose flowers were crisped by that same cold snap by the way).

I don't feel tough today. Yesterday afternoon a gunner shot and killed ten people in my home town of Boulder.

Boulder isn't just any old town: it's "special" in every precious and pretentious connotation of that word. It's a place that if you grow up there you feel a tad superior to people who grow up in less picturesque and idyllic places. It attracts tourists in droves. Coloradoans in other parts of the state heap scorn on "a few square miles surrounded by reality", on Boulder's ultra-liberality, its airs.

Growing up in the 1950's and 1960's the town had not yet become so dominated by the many Scientific Institutes, the counter-cultural boutiques and scores of professional hippies. Tibetan Buddhism had not yet put its stamp on the town (the Naropa Institute has buildings all over town: a University, and large mysterious buildings--one catty corner from the house I grew up in: temples? dormitories? Half a dozen of my closest friends were part of that community--why have I never asked them to explain what all those buildings with Tibetan paintings and signage on them were?

And yes, the University of Colorado--where I graduated a long time ago. What really makes Boulder unique are the Flatirons--enormous cliffs that jut thousands of feet into the air at the northwest part of town. Boulder city mountain parks and open space constitute thousands of acres surrounding the city on most sides, creating a donut of nature buffering Boulder from the cancerous urbanization that's smothered so much of the Front Range.

I grew up a few blocks from the start of that open space at Chatauqua park--one of the countless benisons I was granted by this enchanted spot.

There is no place in America where one would expect the brutal murder of a child beauty queen in a stately home's basement, or the shooting of ten citizens in a grocery store.

My father was a hunter and we grew up eating venison and elk. Once when we'd gone camping I woke up at dawn to see the shadow silhouette of a bear on its hind legs--pawing our tent from the outside. I looked next to me and my father had a pistol drawn and pointed in case the bear tried to get into the tent--I had no idea he even owned a pistol!

My dad was born in the 19th century and came to Colorado in 1910 when it was basically the wild West. He had a first cousin who shot someone and escaped to Mexico. I probably have second cousins in Tampico. My dad's brother-in-law shot my Uncle Steve in the leg because (Steve accused him of killing my aunt Katina). In February of 1957 a bitter Italian-American broke into my father's hotel and pool hall building in Oak Creek and shot George Kourkounis and two others to death before going home and committing suicide. Kourkounis was my father's partner and the man closest to my family.

In 1993 not long after we'd moved to our present home in southeast Denver, at a Chuck-e-Cheese's restaurant exactly 2.6 miles southeast of that home a "disgruntled" worker gunned and killed four people in the first such murder that permeated my consciousness in the Denver area.

Seven years later Columbine High in the Southeast metro inaugurated the holocaust of school shootings with 15 deaths by gunfire and 24 wounded. Two nieces of my partner and two dear friends of mine were in the school at the time, and one sustained a wound.

In 2012 another "troubled white male" gunman killed 12 people and wounded 70 at the "Aurora theatre" incident that made going to the cinema a scary act. That took place 6.2 miles east of where I live.

And yesterday afternoon another "troubled" white guy shot and killed ten people in a King Soopers in Boulder.

I have been in the physical and psychological proximity of five horrendous mass killing atrocities in my lifetime. People I love have been killed and wounded in these "events".

I would be thrilled and delighted if every gun on the planet were to rust and disappear. I would like to see the most stringent restrictions placed on gun manufacture and sale. Sure I know there are sportsmen who love their rifles--but I'm at the point that I would LOVE to see all guns banned forever...screw the "sportsmen" who don't bother to put a kibosh on the wackos.

I believe gun violence (to give it its genteel name) is a cancer on America's soul That and racism, and egregious predatory capitalism are destroying the fabric of this once great country...

Oh yeah. I'm not too hot on these spring snows right now either.

*To be fair, block-heads are not by any means restricted to the red states--they're just a majority there. And I preferred a different term to characterize them.