Unholy wisdom: the flea-bitten past comes back again.


I know,  I know--Prairiebreak is about flowers, posies and suchlike thingamabobs--and I announce prominently. But it just so happens that I'm not as monomaniacally focused on the Plant Kingdom as you might suspect. I have a few other hobby horses, one of which is Byzantine art and history. Constantinople (and yes, Istanbul) are near and dear to my heart. I've only visited three times---almost a quarter century apart (1970, 1995 and 2015) and all three times a visit to Hagia Sophia (or the Ayasofya Mosque as we should now call it) was a highlight. All three times I was distressed at the shoddy touristy trappings inflicted on the awesome edifice.

Today, there was an Islamic call to prayer there for the first time since 1934, when another Turkish headman (Mustafa Kemal Atatürk) was persuaded to turn the Orthodox Cathedral of 900 years turned mosque for well over 400 years into a Museum. I confess to be a tepid Christian at best, and a lapsed Orthodox at worst, it might shock you to know that having the space as a Museum is perhaps more odious to me than for it to be a place of worship. Yes, even Islamic, since there is a rather long precedent for it after all...

Yes, I said it: better a mosque than a souvenir shop and tourist trap. But there's more to all this than that.

It seems to me that Recep Tayyip Erdoğan's is dedicated to unraveling as much of Atatürk's legacy as the drumpster is out to undo Obama's achievements. Even more effectively than Brazil's Bolsanaro, and far better than our own home grown would be tyrant,  Erdogan has achieved a sort of apotheosis as a strong man girded by Islam and his implacable will. These petty tyrants feed on publicity and stunts. And no doubt they are driven by profound personal psychoses that are fun to try and plumb.

Anatolia has many a precedent: Nearly two millennia of sultans and emperors who pulled great stunts, none more so than Justinian, who is generally considered the greatest of over a millennium of emperors of the later Roman empire (lasting from Constantine's moving Rome to the Bosphorus and the final conquest by Mehmet in 1453). The Byzantine empire achieved its apogee under his autocratic and effective rule. His greatest stunt (aside from a certain church) was codifying law (the Justinianic code  which hovers in the background even of our contemporary legal system.) There was a fly in the soup---or shall we say a flea? As the Later Roman empire approached the size and grandeur of its Western Roman antecedent, the bubonic plague reached Constantinople and things changed rather quickly. It is interesting to note that that pandemic had a lot of unexpected consquences...as we shall see. 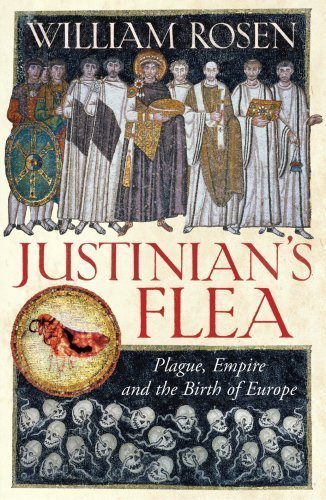 To get the full flavor of this era, I recommend the book featured above--available in many editions and sources. A terrific read. It reveals a number of intriguing wrinkles reflecting not just on Byzantium, but perhaps on our current stream of events....

Justinian's wife Theodora (c. 500 – 28 June 548) has been credited with being his closest confidante and collaborator: some intriguing parallels between her and other contemporary spouses could be drawn, although it is acknowledtged by most scholars that Theodora was far more than just an employee of a professional escort service prior to her hooking up with Justinian. She performed in what was apparently a sort of pornographic circus and she had likely been an out and out hooker. Ironic that the crown jewel of their reign was the Hagia Sophia--

She was also a devout Monophysite (a major challenge to the predominant Chalcedonian branch of the Orthodox religion) and she protected the adherents to that sect while she lived--most of whom were Christians in the Near East (Palestine, Syria, Jordabn) and northern Africa.

Shortly after her death, The Chalcedonian Justin II began a fierce campaign of suppressing Monophysitism as a heresy, alienating the Christians of the near East and Africa from the Byzantine government and setting the stage for something big.

Enter stage right: Mohammad c. (570 CE – 8 June 632 CE): yes, he who founded the Islamic faith.  In the blink of a historic eye, Islam was to encompass much of the middle latitudes of Africa and Eurasia from Morocco in the far West to Indonesia in the far East--all in a few centuries.  Once Mohammad consolidated the Arabian Peninsula, he turned to the Eastern Mediterranean Littoral where the cities were filled with disaffected Christians angry at Constantinople. The rapid absorption of the Monophysite elements of Byzantium (which had the richest commerce of the first Millennium) effectively catapulted Islam across half the planet in short order.

Mohammad had the added advantage that fleas (i.e. carriers of the bubonic plangue) wouldn't survive in the 100* degree heat of much of the Near East.

Would this have happened if Justinian had predeceased Theodora? And the weakened Contantinople not been ravaged by the pandemic?


The success of Islam is only one of the many consequences of that pandemic: Iconoclasm burgeoned in the dark seventh, eighth and ninth centuries AD: countless images were shattered and mosaics scraped off walls and frescoes were plastered over throughout what remained of Orthodoxy (just as a different brand of iconoclasm is emerging around the world today: the antidote to autocracy?)

But the obvious consequence of the Black Plague pandemic was darkest hours of the Dark Ages throughout the Mediterranean and Europe: commerce effectively ground to a halt in Western Europe for two centuries, and the glow of civilization in Byzantium was dimmed.

Let's hope COVID-19 will not follow in the footsteps of the Justinianic pandemic. And somehow Haghia Sophia has not only weathered these political storms, but still glowers in the eye of the historic hurricane.

P.S. As an aside, jingoistic Turcophiles love to point out how much more "beautiful" the shimmering caerulean interior of the Blue Mosque is than the dim dark gold of Haghia Sophia. Of course, the Turkish Government has cluttered the interior of the Haghia Sophia with scaffolding, and since it is the #1 tourist attraction of the entire country, it is continuously and constantly thronged with massive gawking crowds, who hardly improve the scene. I am horrified what the millions of visitors over the decades have done to the gorgeous inlaid marble flooring: I hope that as a mosque the floor will be protected with carpets.

I would be curious if Ancestry.com exists in Turkey: I doubt that it would be very popular since the notion of Ethnic Turk: a largely mythic concept promulgated by Ataturk who was born in Thessalonika, and Erdogan who is known to be in large part ethnic Laz (a Turkish minority related to the Georgians). His family came originally from Rize province near Georgia (Rize derives from the Greek "riza" meaning "root"-- interesting, no?) and the area was populated largely with Pontic Greeks until the Lausanne treaty population exchanges nearly 100 years ago. Many believe Erdogan likely has Greek antecedents as well as Laz. I suspect the vast majority of present day Turks have more Greek ethnic ancestry than Turkmen. I was shocked to see the distinctive Turkic physiognomies of the Kazakhs looked nothing like the populace I've observed in Turkey. Turks look like Greeks and vice versa. Because they are--which is the paradox underlying all the hostilities and much of the present day histrionics.

Of course we "Greeks" are every bit as mixed as the Turks (and likely have plenty of Turkic "blood" infused as well). I did Ancestry.com and was amused to discover that I'm 55% "Italian" (whatever THAT is). I don't have my chart handy, but I believe I do have a dash of "Greek" in there too!

The Russians have an expression: "scratch a Russian, find a Tatar". Both Italians and Greeks have the motto "same face, same race".

If and when the "me too" movement and "Minority Lives Matter" ever penetrate the hard ceramic shell of post Ottoman Turkishness, it will be interesting to see what psychological statues tumble.  Erdogan notwithstanding, I suspect that artificially polarized but actually ethnically homogenized Anatolia may atone before America comes to terms with the odious burden of historic racism and white supremacy.