Patagonian Petunia to DIE for--and more tales from the Steppes!

Plant Delights nursery once had a catalog cover with a picture of a petunia with a bar across it saying "Friends don't let friends plant annuals"...click on the phrase and you can see it! I confess, I grow lots of annuals of all kinds--but right now there is a pretty remarkable display of a hardy petunia at Denver Botanic Gardens iconic Steppe Garden. 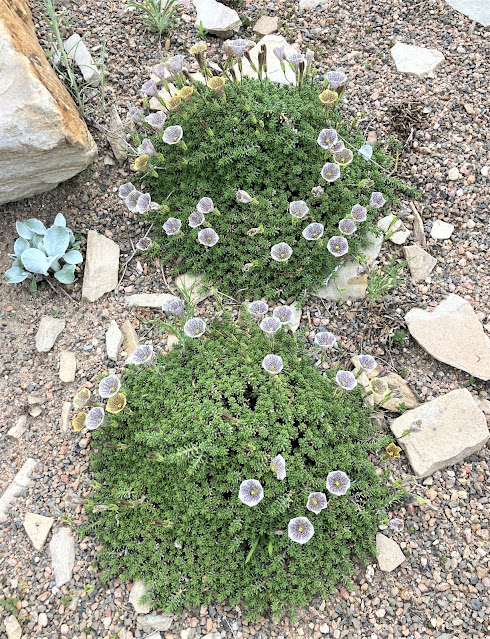 Some are further along than others--but it looks that this will be a banner year for this remarkable little shrub...the variability in flower color is fascinating. 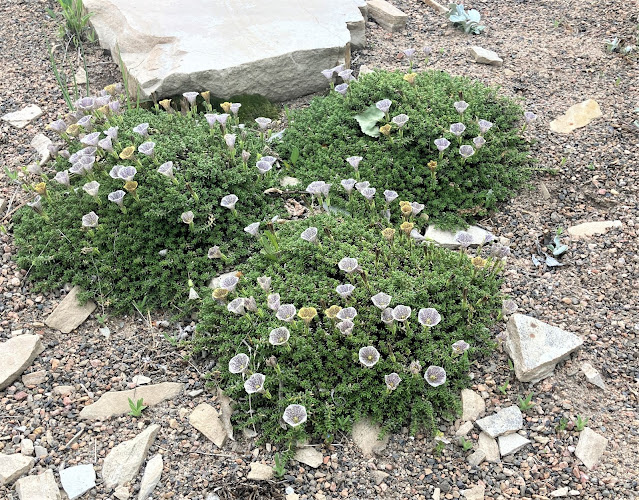 There are dozens of enormous clumps dotting the large slope of the Patagonian section of this garden: I took advantage of a little cloud cover to try and capture these in photographs. I think it worked.. 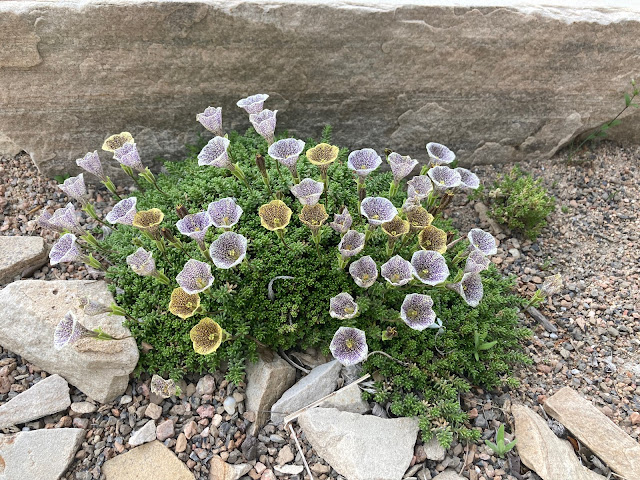 Some showed the transition of flower color from biscuit yellow to almost gray better than others... 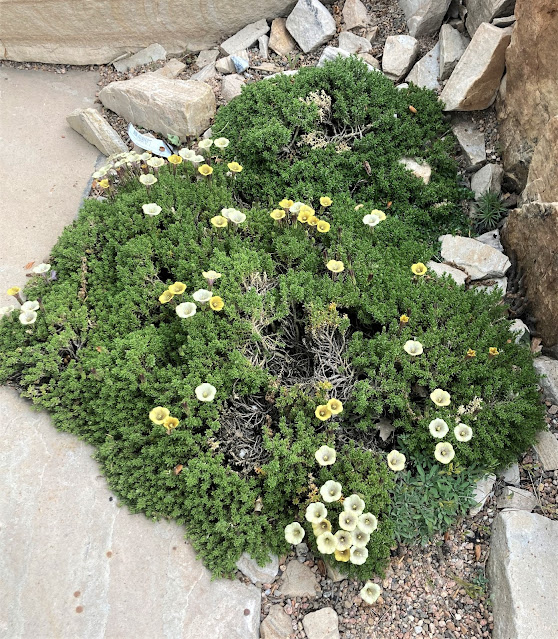 And some approached yellow 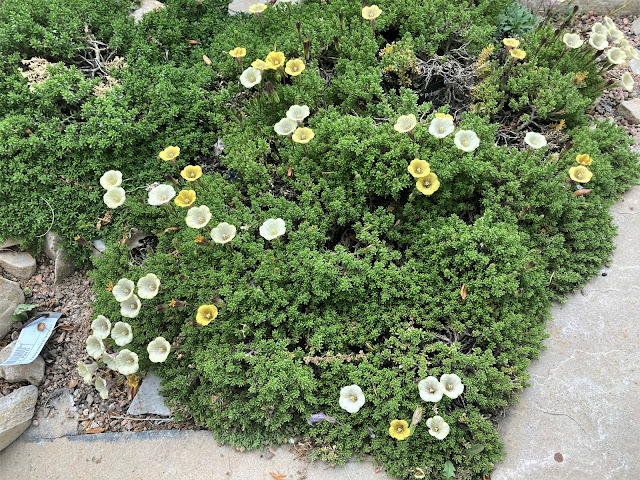 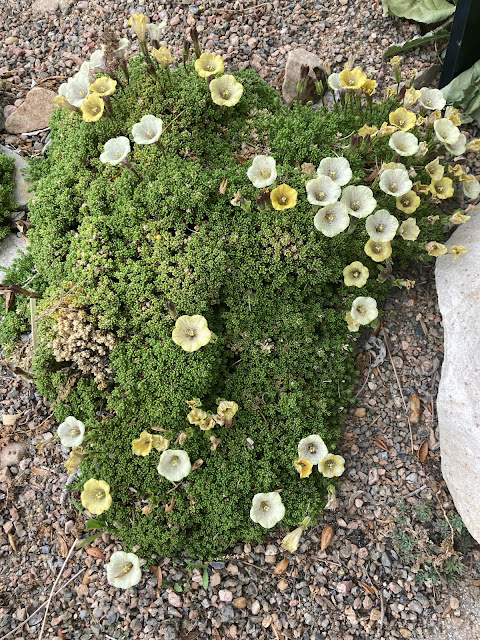 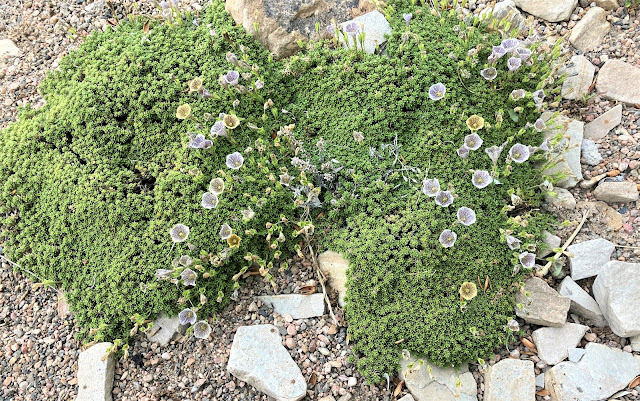 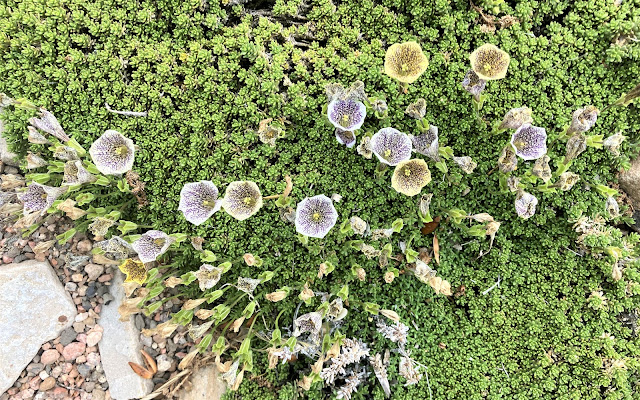 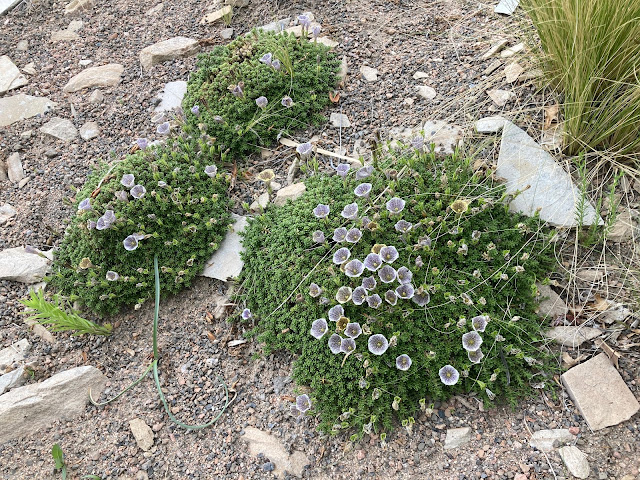 You'll have to forgive me, I couldn't control myself--kept taking pictures! 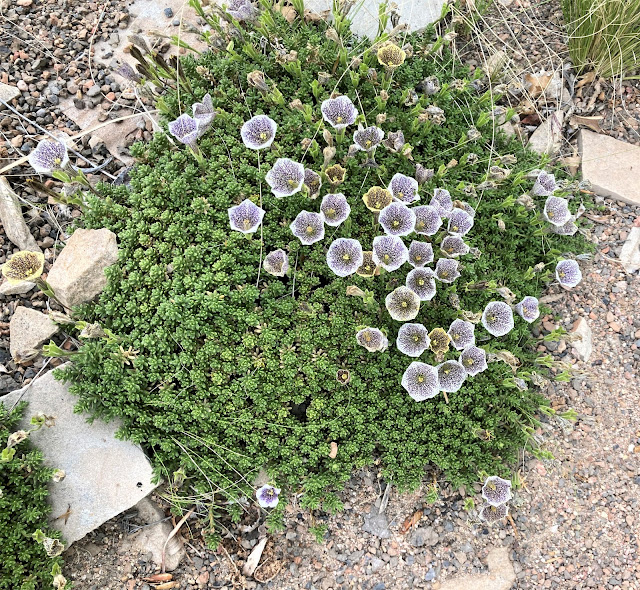 If someone told me twenty years ago that there would be a Patagonian garden at DBG filled with hardy cushion petunias I would have scoffed: "No way, Jose!" 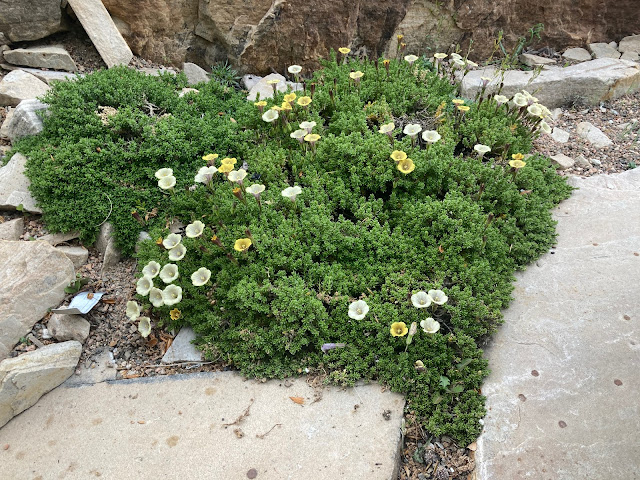 Last year the cushions were much smaller and blooming was more sparse--apparently these improve with time! 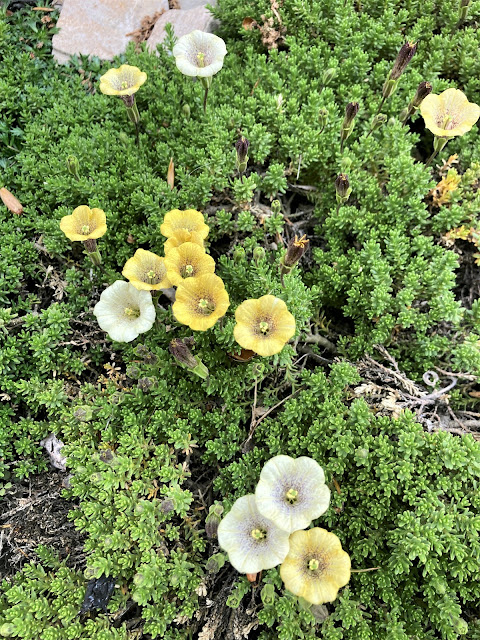 These have even been sold by local nurseries and plant sales--I have several friends with impressive spreads of them in their private gardens!

Of course, there are more than petunias in the Patagonian garden: there are a number of attractive Acaenas--this one is my personal favorite.
Although most references now lump this with our native A. multifida, having seen hundreds of these in the wild and now in this garden, I'm not convinced! 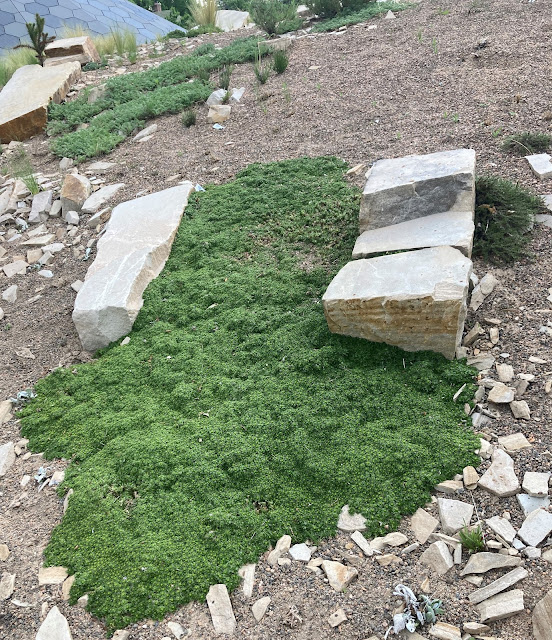 Several cushions of Bolax glebaria (or is it Azorella trifurcata now again?) compete with the petunia to make vast mats on the slope. 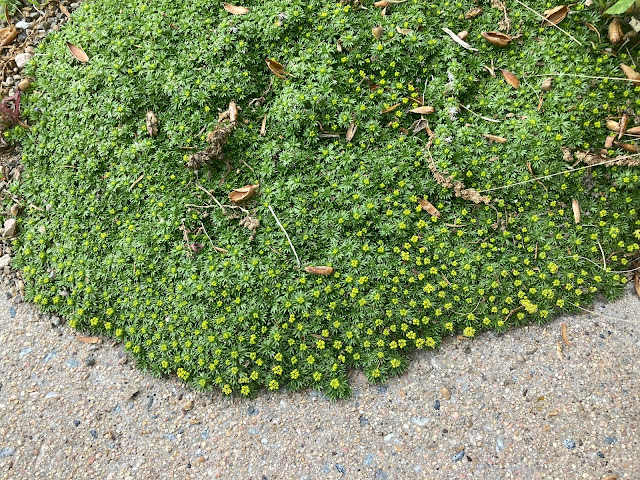 Maybe not too showy, I still love the chartreuse flowers... 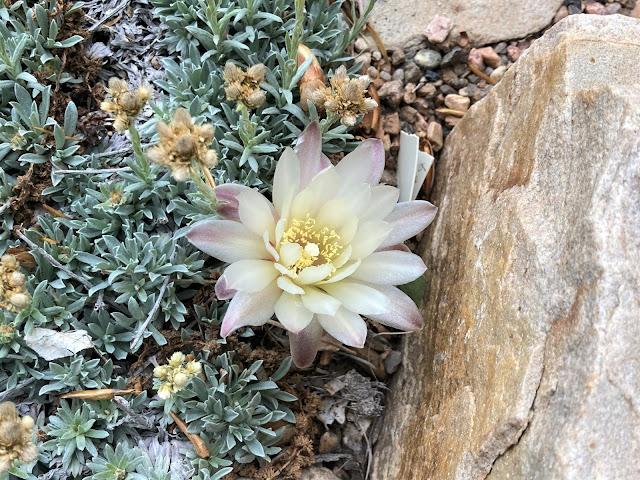 I was delighted to spy a Gymnocalycium blooming--probably gibbosum? the label was obscured by Antennaria magellanica, another Patagonian that closely resembles its Rocky Mountain congeners.

Also making a spectacle of itself, a fine colony of this showy Patagonian irid was in peak bloom as well today: you'll be subjected to a series of pictures I took--I just love this plant! 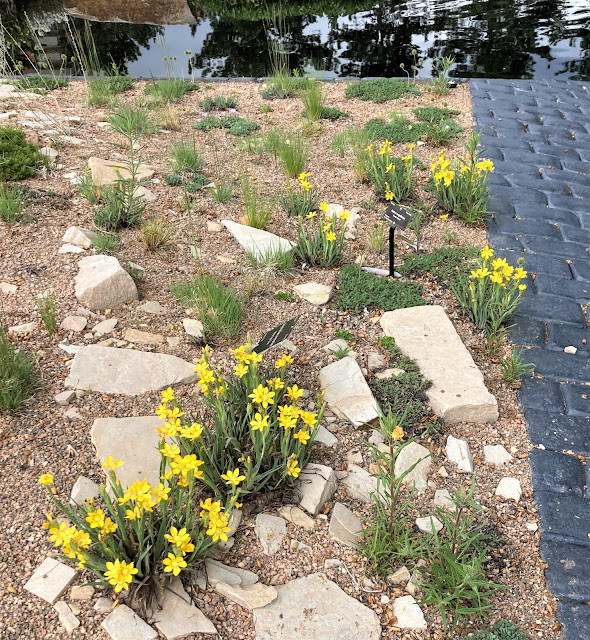 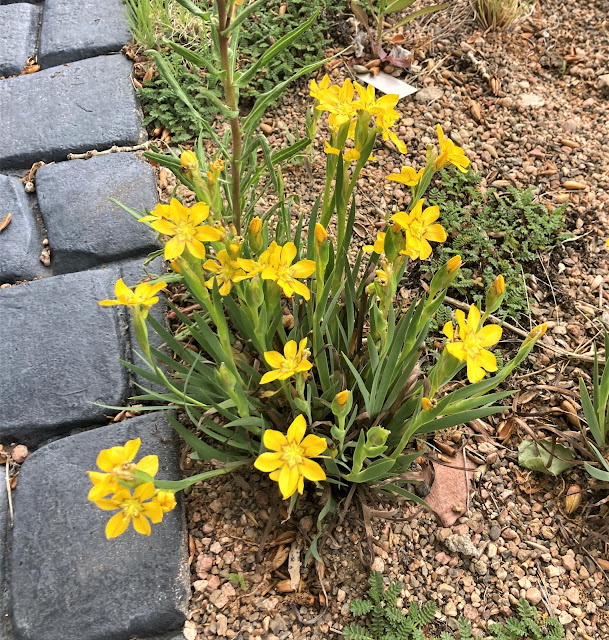 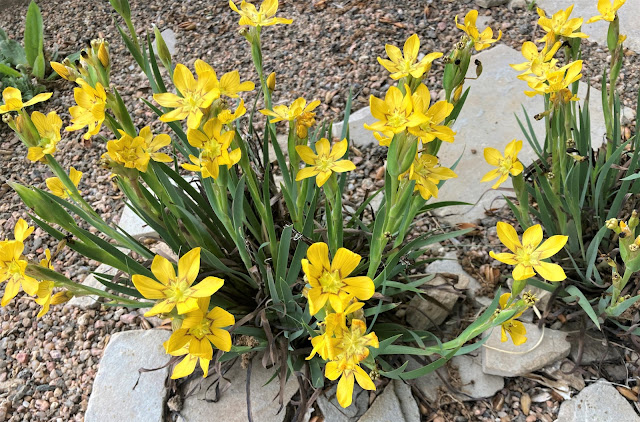 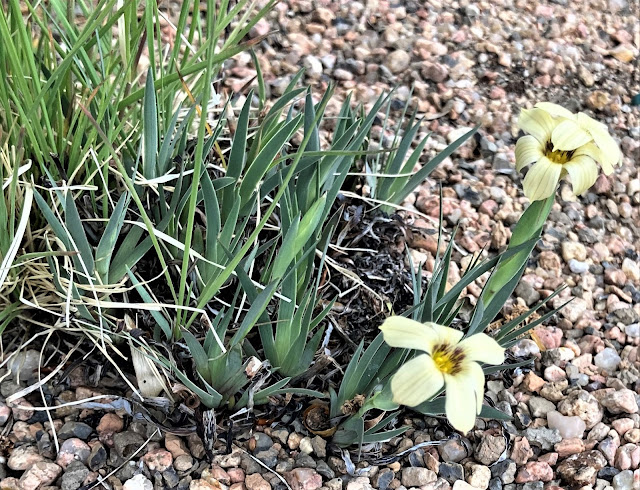 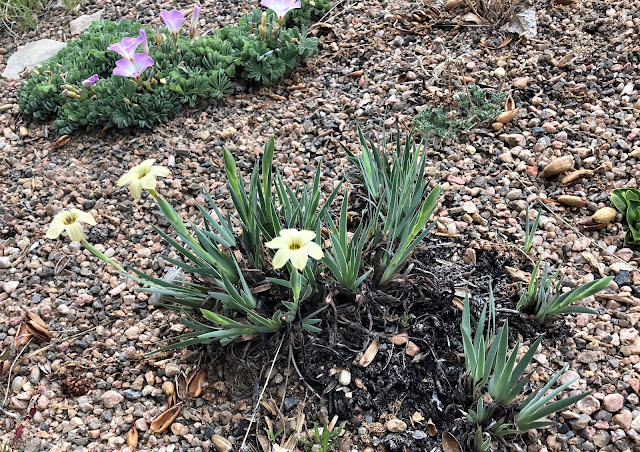 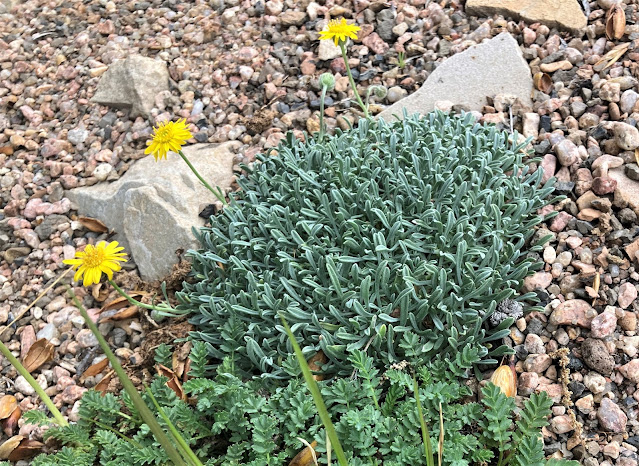 I found this mystery Composite with attractive cushions... 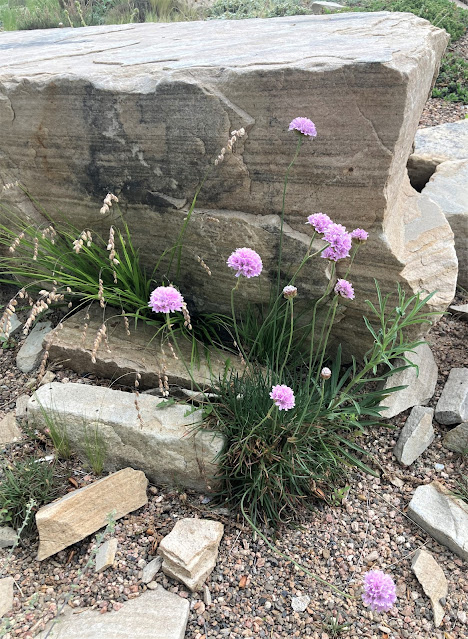 And quite a few clumps of Armeria magellanica (I think they're lumping this with North Temperate A. maritima as well). 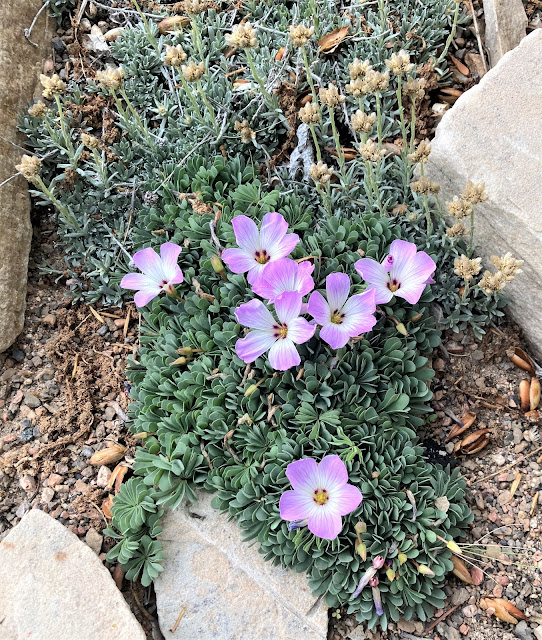 Oxalis adenophylla has been blooming for over a month: it has taken well to this slope. 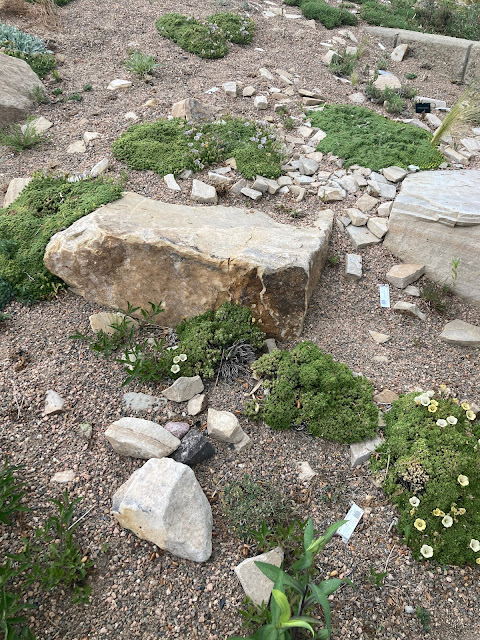 An overall shot showing the characteristic cushion growth of so many Patagonian plants.
Last year there were dozens (or more) clumps of this all over the Garden: I believe they went on a rampage to eliminate it--but I'm glad a few escaped: this is a weed I could cherish! And since I bought one from Wrightman's Alpines, I too may be weeding it out soon!

If someone told me years ago that there would be Araucarias dotted on the Patagonian slope of a Steppe Garden at DBG I would have been shocked. Each year a few succumb, but several are hanging in there: not quite ready for street tree planting in Denver yet!
Alas, not yet as prolific as the petunia, I was dumbfounded a month ago when I found out that Viola cotyledon had been coaxed to grow and even to bloom in the Patagonian Steppe Garden at DBG, something I'd not ever even dreamed to see happen!

Denver Botanic Gardens has not only produced the most ambitious Steppe Garden in existence (to my knowledge)--remember this is just the Patagonian section--and a landmark book on the subject, but we have staged a series of symposia, the next of which will have speakers from eight countries representing the full spectrum of World steppe habitats! 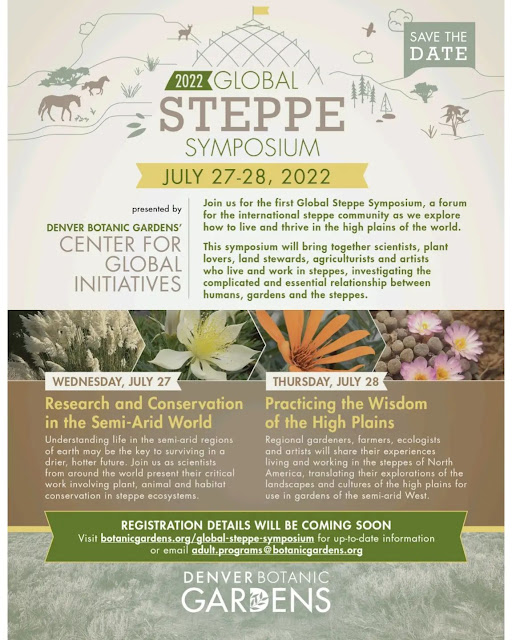 Do plan on joining me in late July when for the first time ever, researchers from all four steppe regions (including Patagonia) gather at Denver Botanic Gardens to advance our mission of educating ourselves and the public about this extremely important biome that is so poorly understood. Click HERE for detailed descriptions of presentations and presenters and to register!
P.S. my kudos to the Steppe Garden team working with Mike Bone (including Kevin Williams and Sonya Anderson and their seasonal and intern staff) for their remarkable achievements growing South American plants: In addition to the Steppe Garden's Patagonian section, they have a large test garden at Chatfield Farms were dozens more species are being grown and studied as part of a joint research project with Argentina's equivalent of the USDA (I.N.T.A.: Instituto Nacional de Tecnologia Agropecuaria). The Patagonian manager of this program will be speaking at the Steppe Symposium.
- May 27, 2022