Colorado does nothing according to plan: some years we have 2' of snow in late May, or early September. I recall a series of miraculous springs (gradually warming, no late frosts) 2006-2010 that convinced me we'd achieved the ideal climate. Then a polar vortex in April even killed daffodils and crocuses! This year we've dodged the frost bullet for many nights: Impatiens, Castor beans and Begonia are all still looking good. And the fall color is rapidly approaching its zenith.

I got the above picture of the above in my email today from Judith Sellers (a friend of a sufficient number of years neither of us will confess how many). Judy bought a 5 gallon vine maple (Acer circinatum) at a Denver Botanic Gardens' plant sale in 1983: today it rivals many that grow in the wild in size: Colorado Springs is over 6000' elevation, in a solid Zone 5--where vine maples aren't suppose to grow. Obviously it does! There is still so much to be learned about winter hardiness! I've included a note* Judy sent me about the tree at the end of this blog.

Of course, Ginnala maples are the commonest small maple in our area for good reason. I admire this one every day this time of year (it's blocks from my house where I go to turn for work). They are reputed to spread viciously from seed in the Upper Midwest, where many states now ban their sale. I have not observed this in Colorado. But then I've never seen a Miscanthus seedling hereabouts, and it's become an "invasive"' in wetter climates. Which is a pretty good indication that invasiveness is a relative term that is largely contextual. 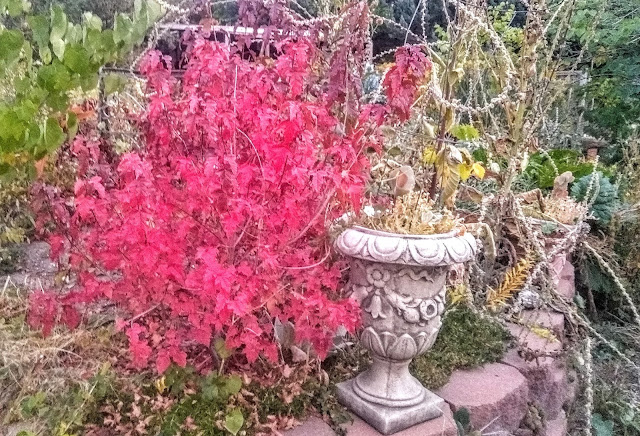 I took this picture last year--but it was every bit as showy this year--only bigger! In my home garden (a gift of my brother-in-law Allan Taylor who is in an advanced stage of arboritis. 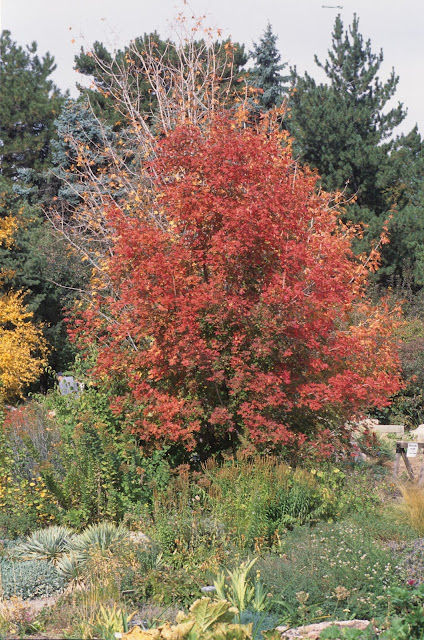 Most tree nerds would agree that the most underplanted maple in our region is the bigtooth maple (Acer grandidentatum), which goes by many other common names as well (Utah maple, Wasatch maple--both of which are perhaps a tad limited since it grows from Texas to British Columbia!). I have several in my garden that are thriving in a border than never gets water: they're very drought tolerant! 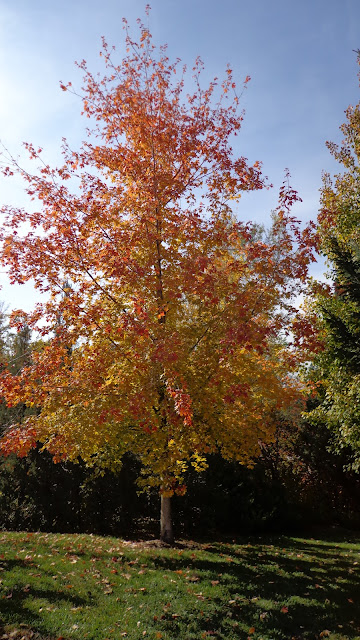 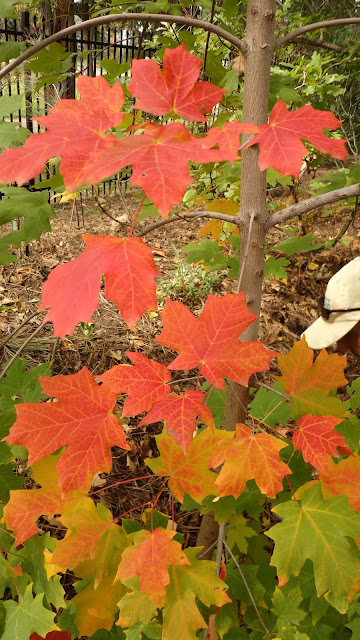 A closeup of a typical specimen: the color is usually similar to Sugar Maples, to which it is closely related (and with which it has been lumped by a few botanists). 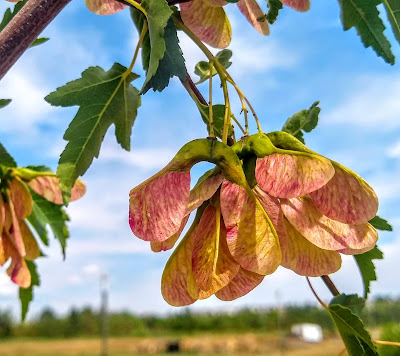 Seedpods on Acer semenovii, which has yet to turn color for me...nothing wrong with those samaras though!

The champion maple in Denver is near the Museum of Nature and Science: I make a point of driving by this time of year whenever I can. This was taken several years ago--it's just starting to turn this year. Most "sugar maples" in Denver turn out to be Acer nigrum--which is morphologically similar, but tolerates alkaline soil and our extremes of heat and drought better. 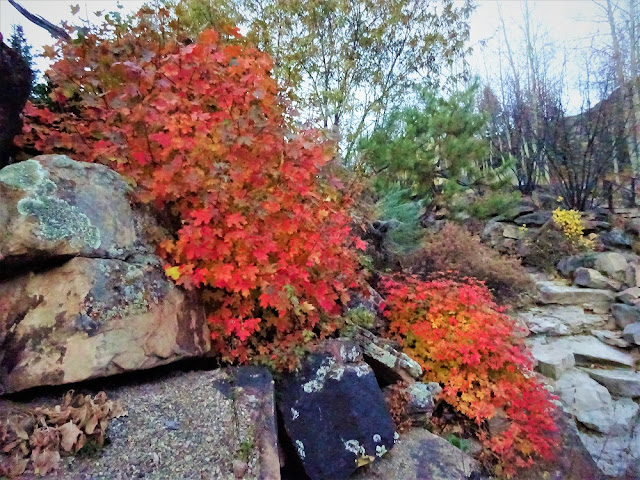 I've skipped back to Acer grandidentatum: Oh well--this shows dwarf clones growing by the waterfall at Betty Ford Garden in Vail. I missed seeing these in color this fall--my bad! Worth the 100 mile drive. 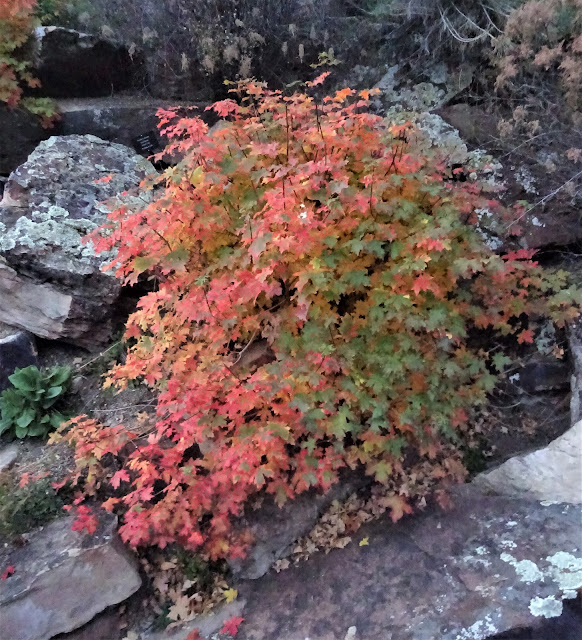 And here's a single specimen: I actually have two dwarf bigtooth maples in my garden--and one is coloring up beautifully: nowhere nearly this size. I wonder if these two come from the days my brother-in-law Allan would cull the seedling fields at Fort Collins Nursery wholesale looking for genetic dwarfs he'd pot up and share.

While every plant sophisticate in Colorado struggles to grow Japanese and paperbark maples, it seems that this tree from northeast China and Korea will prove much easier and more accommodating. This specimen has grown for years on the north side of DBG's education building.

The fall color is quite stunning

And there are those who insist on the true paperbark maple--here's one about twenty years old in Boulder.

The fall color can be spectacular on this as well...

Of course "THE maple" everyone yearns to grow in Colorado is the classic Japanese maple. We had a grove of then for years at DBG that was grown from wild seed collected in northern Japan. These (like 90% at least of all Japanese maples and Japanese cherries) perished in our area during one of the last "polar vortices". 'Bloodgood' is the one cultivar that fared better than most--but this blog is an attempt to remind us that there are a wealth of maples out there--not just the Japanese!

It is a fetching plant I know...but after you've seen the spectacular specimens growing on either coast--with enormous trunks and vast crowns that are not filled with dead branches, you'd be a fool to try to grow this in our harsh steppe climate...

I advise people in our area to avoid planting sugar maples (unless you live very near the foothills in the Black Forest, Colorado Springs or west of 28th street in Boulder where soils are naturally deep and acid). That said, this cultivar has performed spectacularly along the street in front of DBG (makes me wonder if it isn't actually Acer nigrum?) There's so much yet to be learned about adaptability of plants to our area.

I have posted this picture before I took in Anadalucia exactly 20 years ago this month. It had not yet developed its full fall color. I have a hunch it would prove as adaptable as Acer monspessulanus, which I have featured too many times already in this blog...but has anyone introduced this yet? No they're too busy killing Acer palmatum! Honestly, I think the intelligence of Homo sapiens is overrated!

Since there are around 160 species of maples in the world, this blog could conceivably go on for much longer....but it's the peak of autumn color here in Colorado (and elsewhere too I imagine): better to go out and enjoy them in the rapidly transforming chlorophyll....or should I discuss the hundreds of cultivars of Acer palmatum we shouldn't be growing here on our windy and sunny Plains? Particularly since we CAN grow so many of the above well!

*Judy's note about Vine Maple: "One more thing on the vine maple:  As you know the last two falls have been very hard on woody plants with overly warm temps only to see a winter storm come in suddenly, dropping temps dramatically and catching many that had not gone dormant.  I lost several prizes including my 20-year-old dwarf Japanese maple.  That hurt.  Also a Pink Dawn viburnum,  My Northern Lights azalea was severely damaged as was a cotoneater and a Canadian lilac.  Looks like I will also lose a prized, north-facing white fir that's probably 60 ' tall.  Remarkably, the vine maple was unfazed which surprised me in its hardiness.  I don't know if that was the reason or maybe just because it is planted so close to the house.  In any event, losing it would be a terrible loss.  Fingers crossed, though...it's supposed to be 75 here today (October 24).