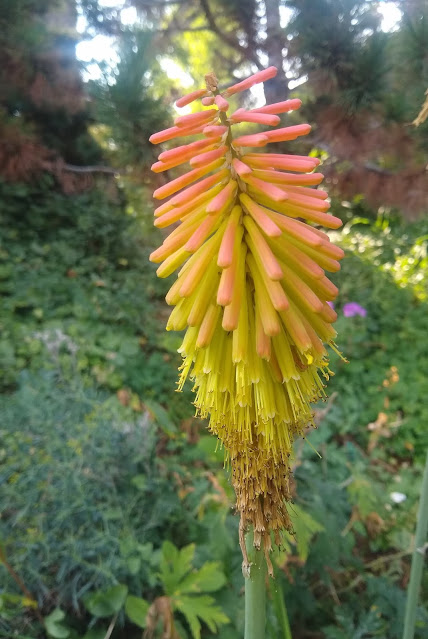 The cooler nights of August seem to revive the garden a bit: there are still quite a few plants coming into bloom--although hard frost may come in less than a month. Kniphofia porphyrantha only produced three flower stems this year--usually a signal that it's time to divide! I am perennially surprised that this has two toned flowers: in the wild where the seed was collected it was pure yellow! 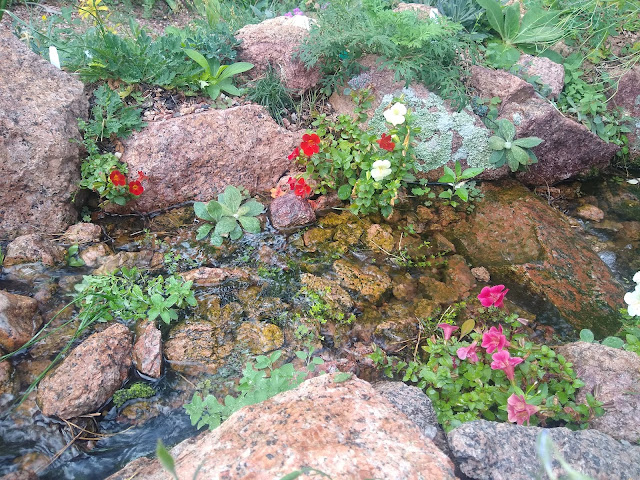 The first time I've grown the South American Mimulus cupreus along the stream: it will not be the last! I was surprised to find a multicolored strain in a local garden center: in the past I've only grown an orange colored form. I want that one here too! 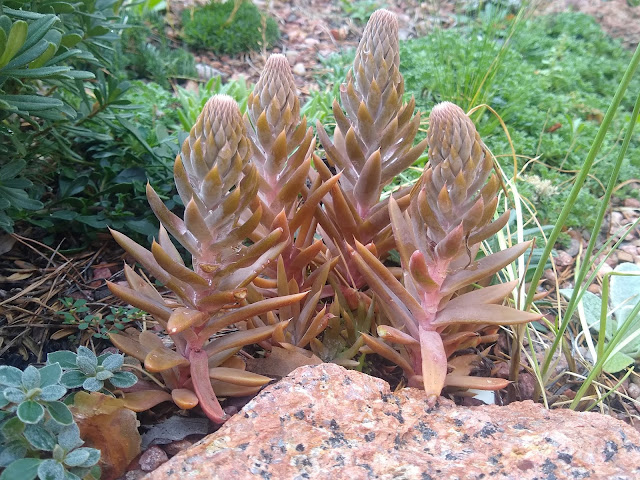 Tbe flowers open just in time for frost (I take the flowering stems indoors where they ripen seed). There are always a lot of pups produced around these to perpetuate this delectable Orostachys fimbriata which I obtained from Huntington Botanical Garden perhaps 35 years ago. It was purportedly collected on roof tiles in Suzhou. I was in Suzhou and peered at many a roof tile, and saw nary a one! 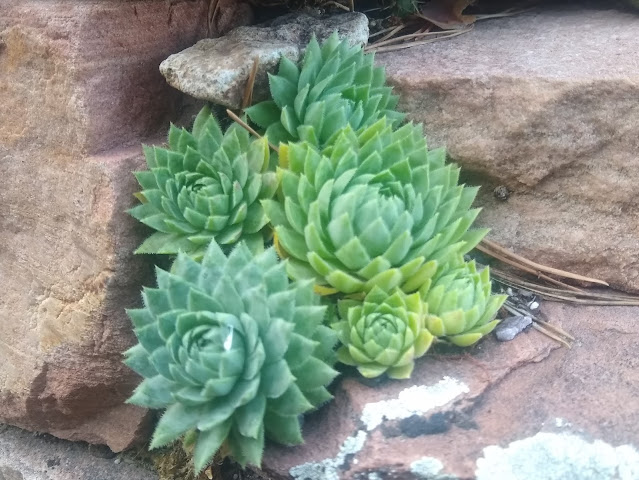 A Sempervivum in the Jovibarba section I reckon (allionii perhaps?) nestled in a crevice. I am always amused at the folks who think Hens and chicks are "common". Not common enough in my opinion... 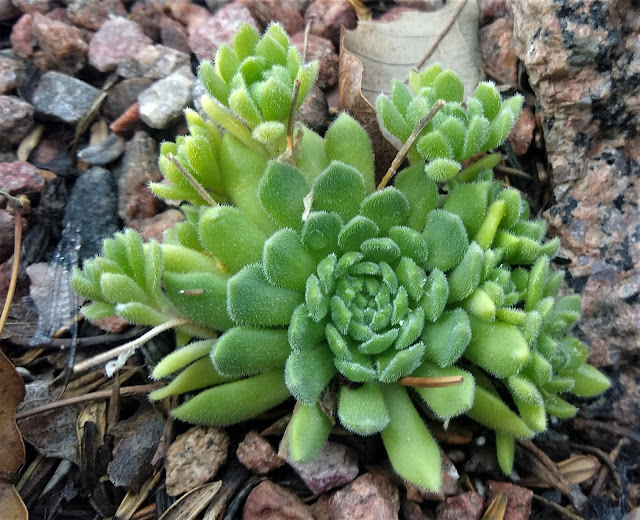 This looks a lot like the last, doesn't it? It's actually much more closely related to Sedums than hens and chicks--Rosularia platyphylla was introduced to us by Mike Bone and Kevin Williams who found it in Kirghistan.  I am tickled pink to grow this! 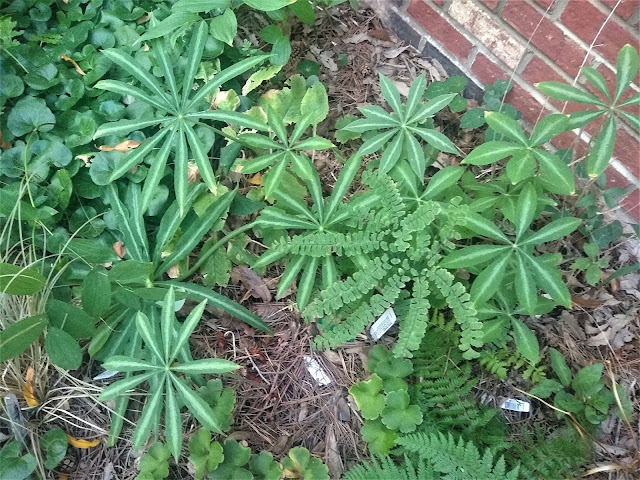 It appears that Arisaema consanguineum must be spreading underground, rather like Amorphophallus konjac! Hurray for that! 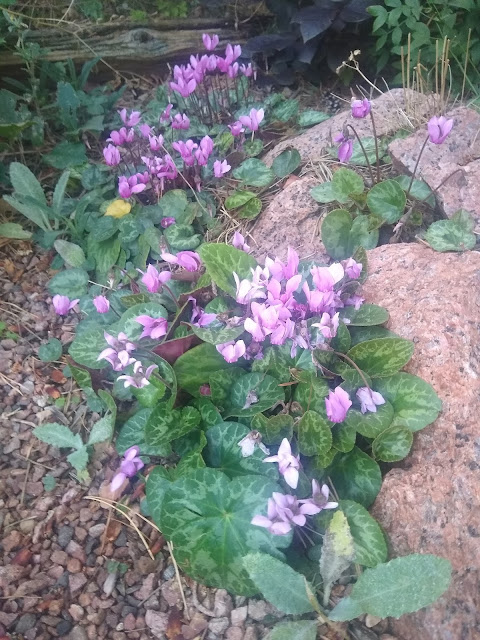 Cyclamen purpurascens starts to bloom in late July and goes strong through September: the best Cyclamen for Colorado (in my opinion). It is beginning to self-sow far and wide: growing in places no Cyclamen should deign to grow! 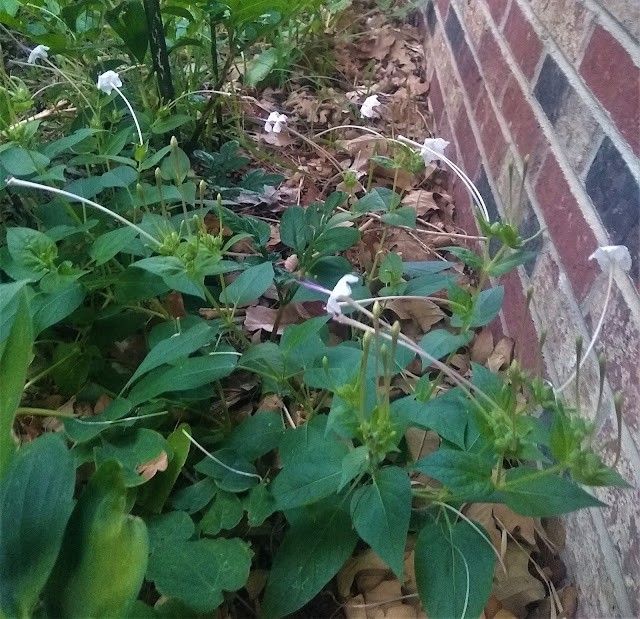 My dear friend of many years, Pat Hayward, posted a picture of this on Facebook a month or so ago: a lusty clump in her garden. I was mightily jealous--since I've tried this many times and always failed. Then a week or so ago I noticed this clump of Mirabilis longiflora growing where I would have NEVER planted it on the east side of my house with hardy Aroids.  I hope it comes back next year! 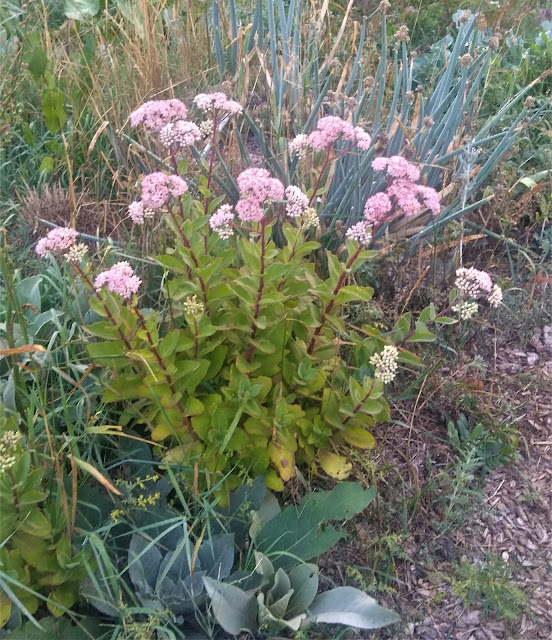 I have grown fonder and fonder of the Hylotelephium sedums: this one is 'Matrona'--thriving in a very dry spot of my xeriscape. 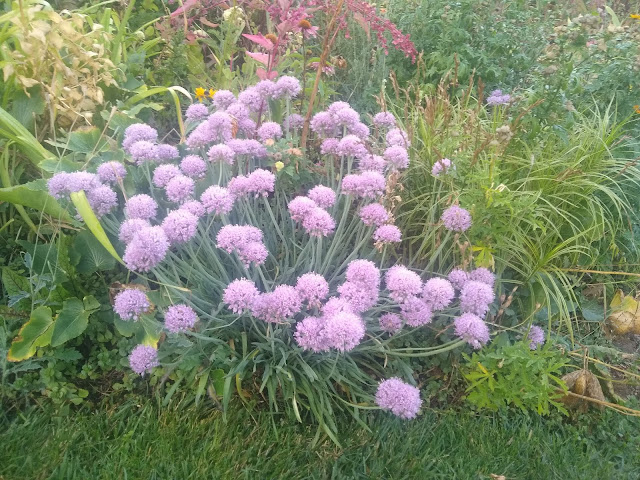 Mark McDonough (Mr. Allium) assures me that Allium senescens var. glaucum is NOT the correct name for this--although he hems and haws a bit when I ask what the real name should be. It's a classic that most rock gardeners grow--it's made a show in the front of both dry and moist borders. 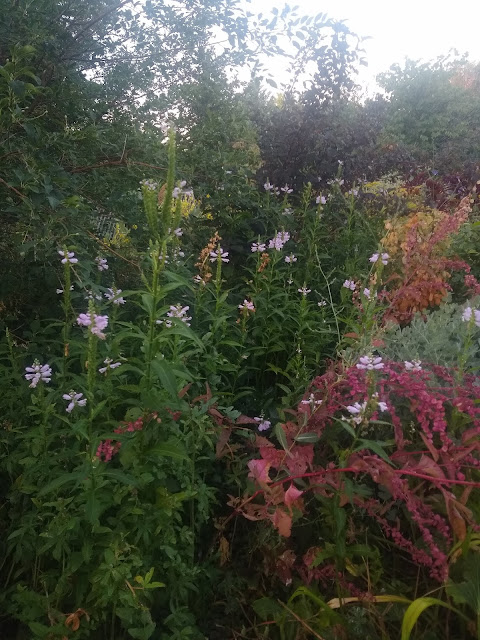 Physostegia 'Eye-full Tower' is a nuisance in the border--just a warning if you ever try to grow it--but it does put on a bit of a show in August. 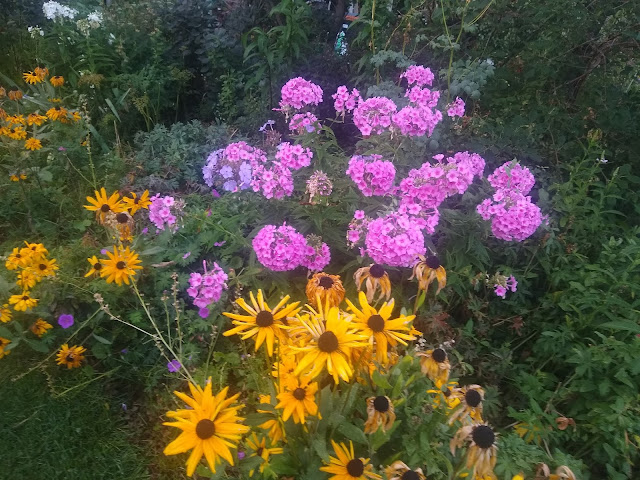 Phlox paniculata hybrids and Rudbeckia hirta combine for a last big splash of color in a border. 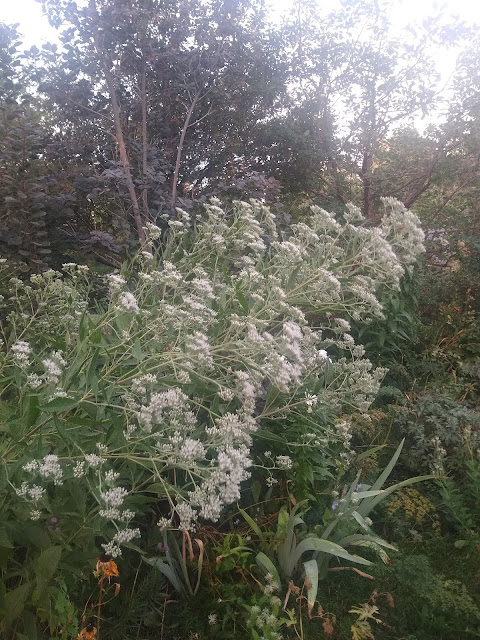 I have got to move this where it won't lean so much: I've gotten fond of Eupatorium altissimum and surprised I've not seen it in any local garden except Kelly Grummons': you do need room for this. 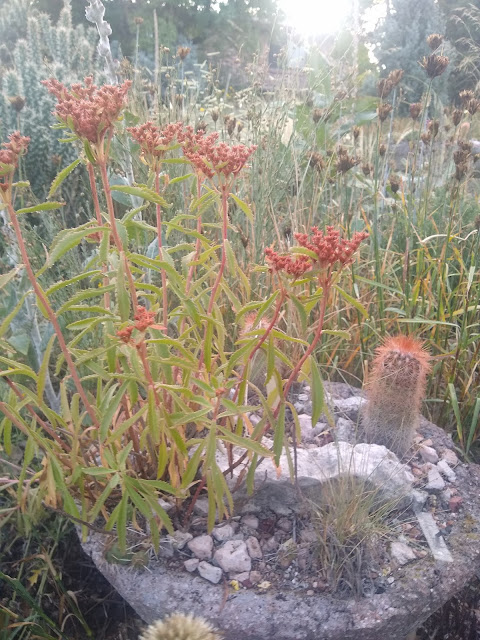 The seedheads of Sedum aizoon echo the spines of Echinocereus reichenbachii var. baileyi 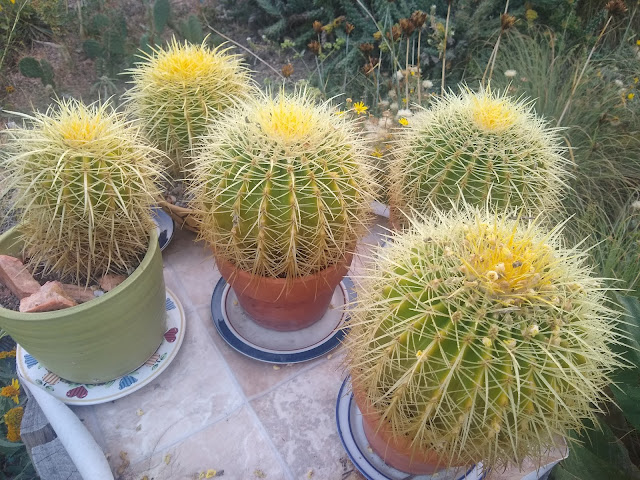 Five golden barrels are better than one in my opinion (Echinocactus grusonii). They do need repotting. Not fun. 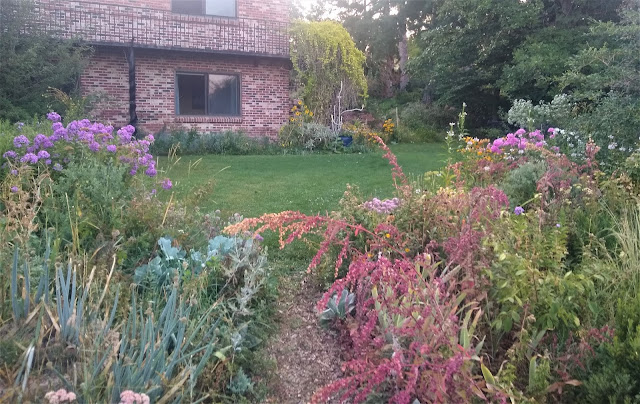 The yellow Fallopia IPolygonum) on the trellis has recovered from a hard winter and will be blooming soon. 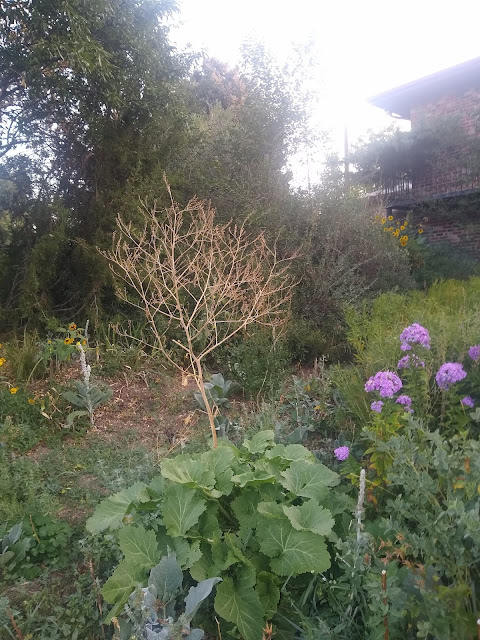 I should harvest the seed on Crambe kotschyana. But it's kind of decorative! 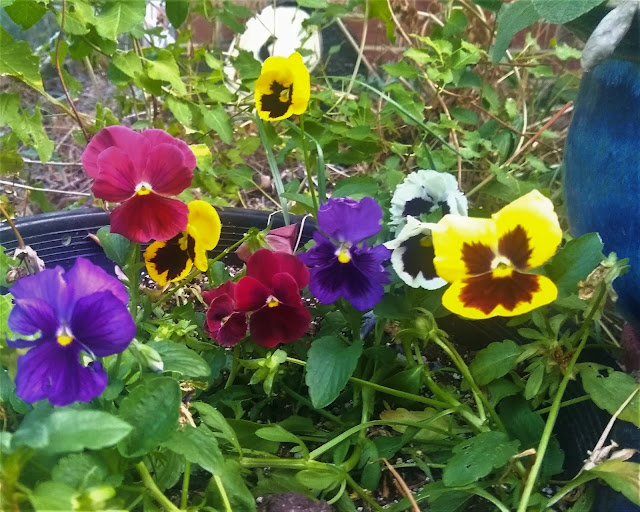 Pansies (Viola x wittrockiana) have persisted in a few pots to September. A testament to our coolish nights (and lots of watering!) 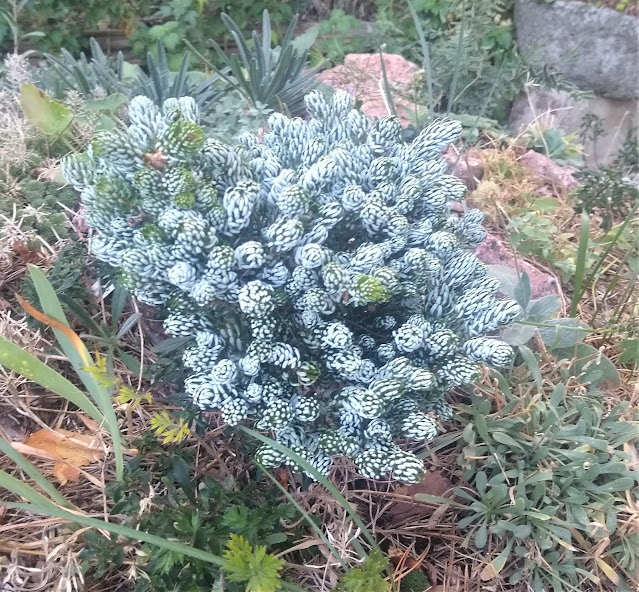 Almost everyone comments on Abies koreana 'Kohout’s Ice Breaker': its parent ('Horst's Silberlocke') is not far away and not nearly as nice a specimen.

I am surprised how tall and adaptable Petrophytum caespitosum is in my rock gardens. For an obligate chasmophyte that always grows on limestone, it's adapted pretty well to open soil in a granite rock garden! This is a Colorado phase of the species--much taller than others it seems to me. I wonder if it's genetically distinct? 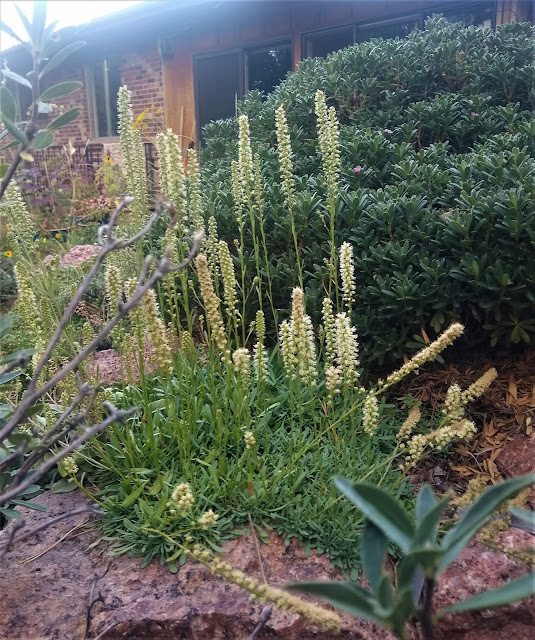 This is a glory in the late summer garden: I get a lot of seed and donate to the exchanges. Wonder how it's done for others?

That's it for now! Time to go to bed. (And soon the same will be said for the garden!)