It's about the plants, honey!


We have grown Aloinopsis spathulata in Colorado for over 30 years: it can persist four or five years but seems to eventually disappear...but only at the Crevice Garden at Simms APEX does it self sow rather vigorously along the path.

People pooh pooh crevice gardens as stark, and rock gardens as artificial in urban settings. But if you want to grow treasures like these, this is the way to do it.

What follows is a photogallery of mostly highly unusual and often challenging plants that are growing superbly in the crevice garden designed only a few years ago by Kenton Seth and Paul Spriggs: it has been a huge education for me, and I believe it signals a fantastic way to grow an enormous range of steppe climate plants well in all sorts of climatic regions. I am restreaining myself and sticking to just labeling the pictures. I think they speak eloquently by themselves!

This has proved pretty cold tolerant--but looks especially happy here. These pictures were taken through the year--from early spring to late autumn. This garden is a season long procession of color and interest


Kenton is the mastermind of dozens of private gardens as well as a half dozen major public displays. His knack with plants equals his talent with rocks.

Do check out his blog: I need a cup of Tea....it's always interesting! 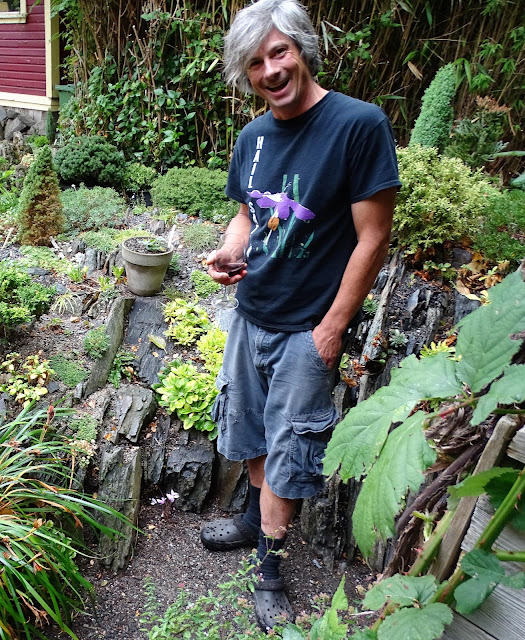 Paul Spriggs at his home crevice gardens in Victoria, British Columbia, I visited a few months ago. Kenton has had Paul help on his larger public garden projects such as here in APEX. They make a formidable team!

Paul and Kenton are well on their way to writing a book on Crevice Gardening which I suspect will be an instant classic. And the plants in this blog are surely fifty very good reason why!

In response to this blog, Kenton sent some elucidation which I think he might not object to my adding at this point (although the first 250 or so blog viewers will miss it:

"As a matter of accuracy, the design of APEX and Cheyenne are mine, but I got Paul's help for execution; but execution should not be undervalued, it's everything! Because not everyone can do it- in fact, no one can do it like Paul.   And I wish I could say that speed of build is not important, but in a public garden, it very much is, so it is worth seeking out a friend and doubling up our speed.  Obviously, its also a great way to connect the culture of rock gardening across borders and involve more folks as well as just hang out with friends.

"But I was the one who was paid to spend hours and nights hashing over pictures with the client, re-drawing sketches, and interviewing everybody who might have contact with the garden to create its limitations, aesthetic, et al, then sourcing/scheduling everything...