If you have visited my blog before you will be used to all sorts of strange plants--usually rather small ones--with even stranger stories. This posting will be something of a contrast--you will find precious few Latin or Cultivar names (at least the first part anyway). That's not what this post is about. What it's about is a remarkable gardener, Sabine Baur and her amazing garden. Which means it is about daylilies too!

I have a picture of Sabine's namesake (a spectacular ruffled, dark eyed beauty which you can look up online) which I would have liked to add here--but can't put my hands on my picture of it. But you will have to settle for the lovely lady herself--and a few glimpses of her garden around July 12 when the daylilies were in peak form: one usually doesn't consider a large field of hybrid daylilies used for breeding and sales as a garden--but when they're in bloom like this it isn't just a garden but a dazzling vista. My point and shoot camera doesn't really do them justice. But I wanted to share a few shots of a wonderful day and visit. 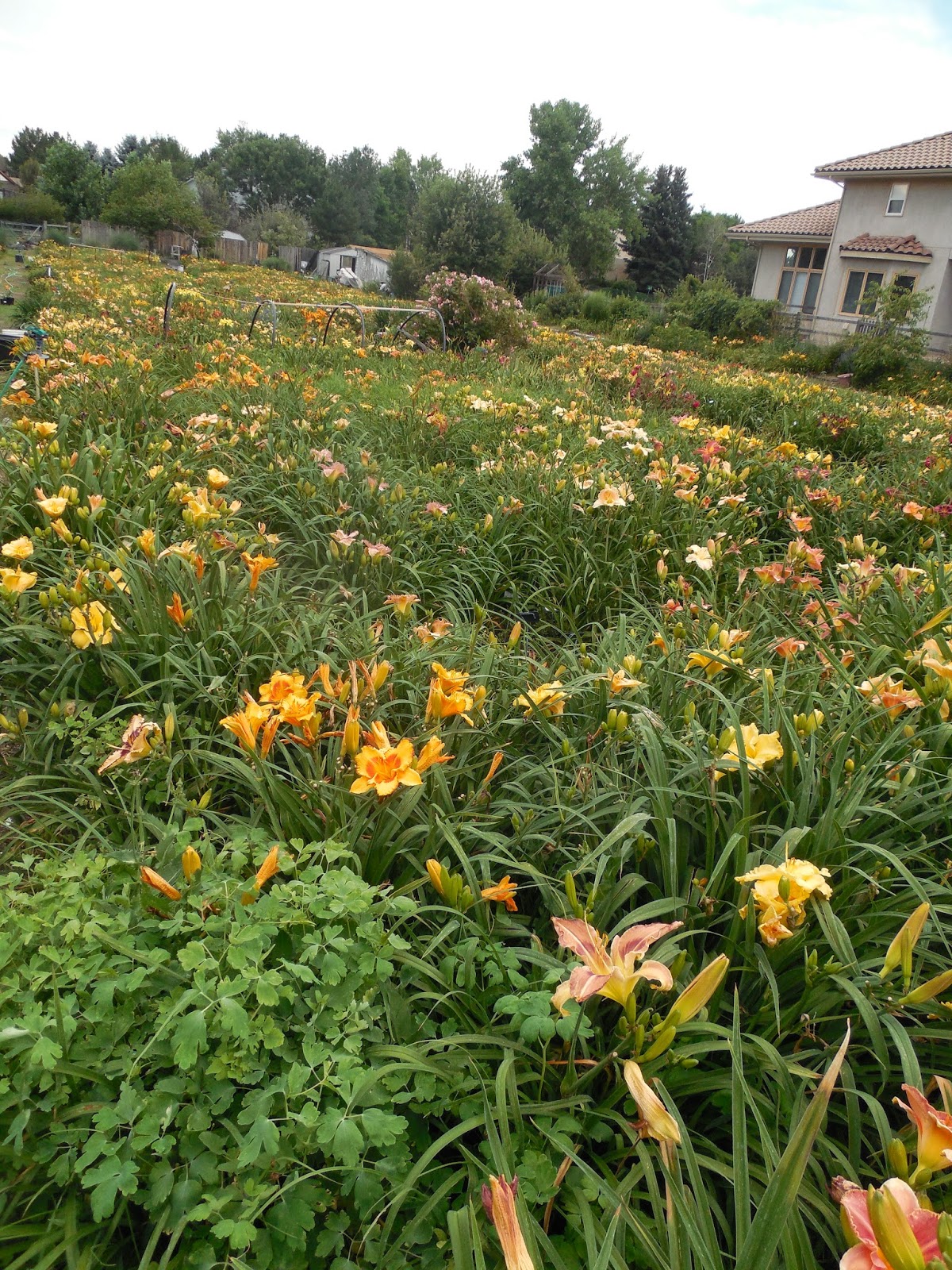 I am appending a few pictures of individual daylilies with names--but these few shots are just for the spectacle of it. And it was one, believe me! Sit back and enjoy like I did... 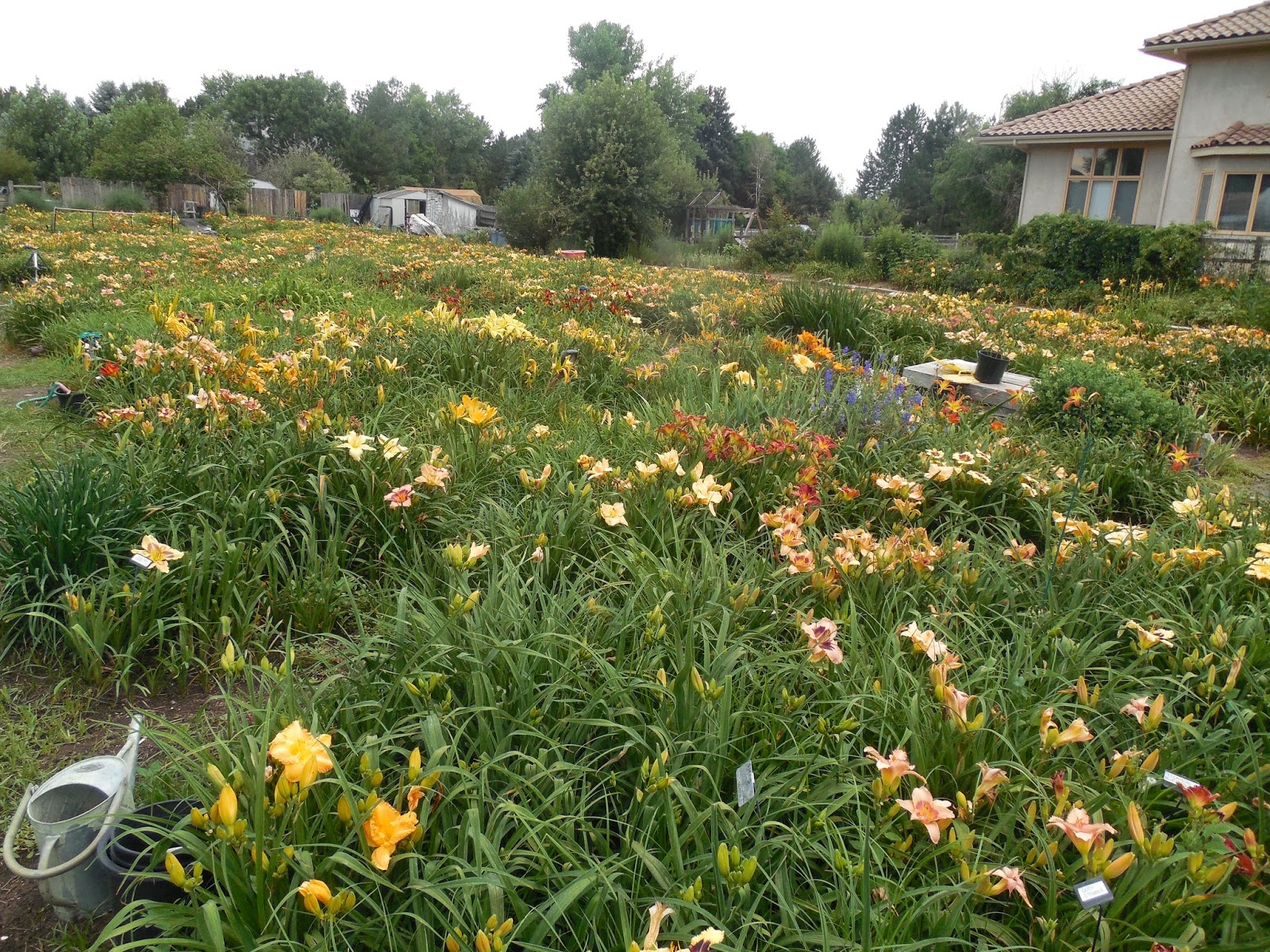 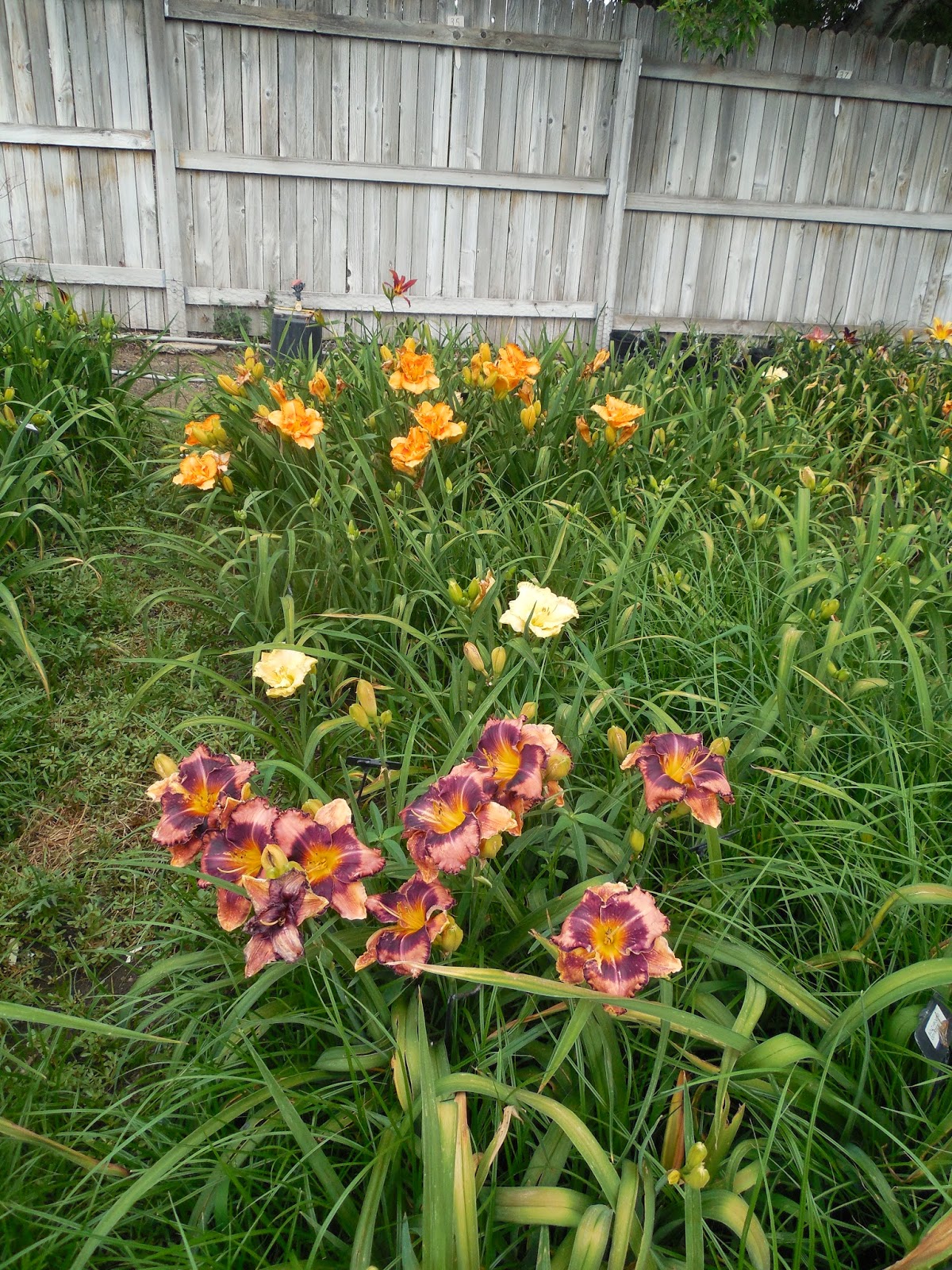 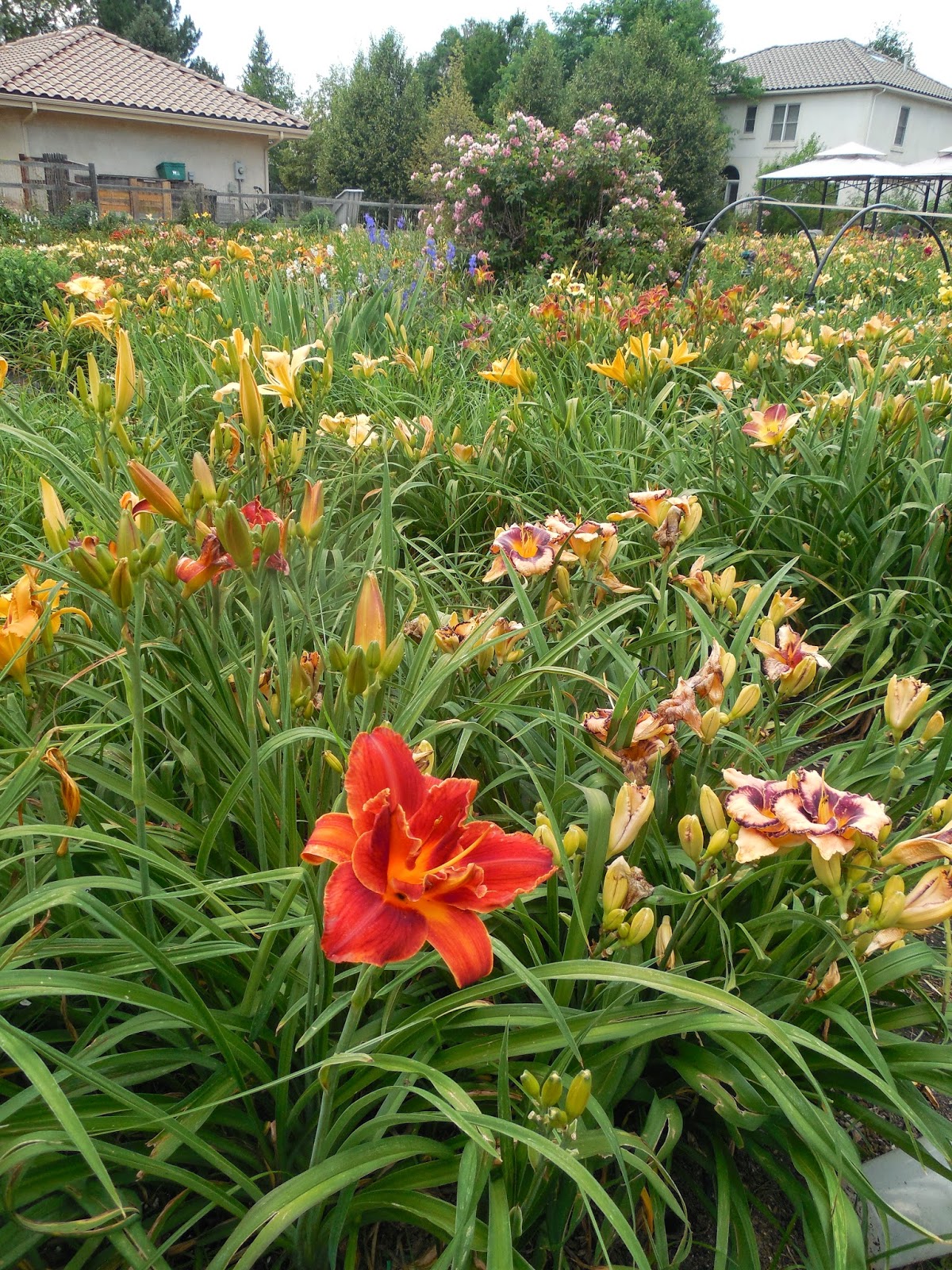 I love this semi-double singleton in front of a sea of pastels! 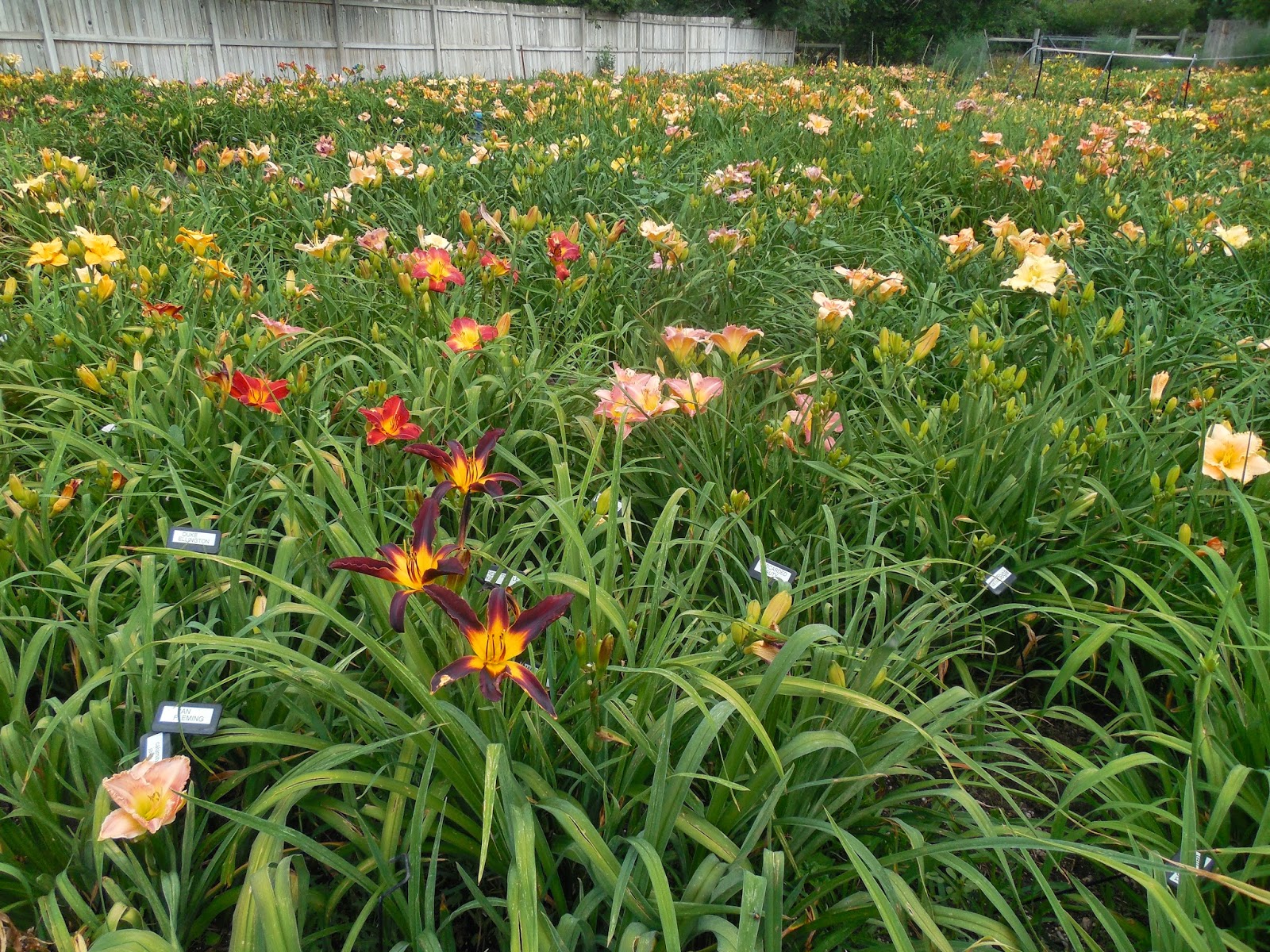 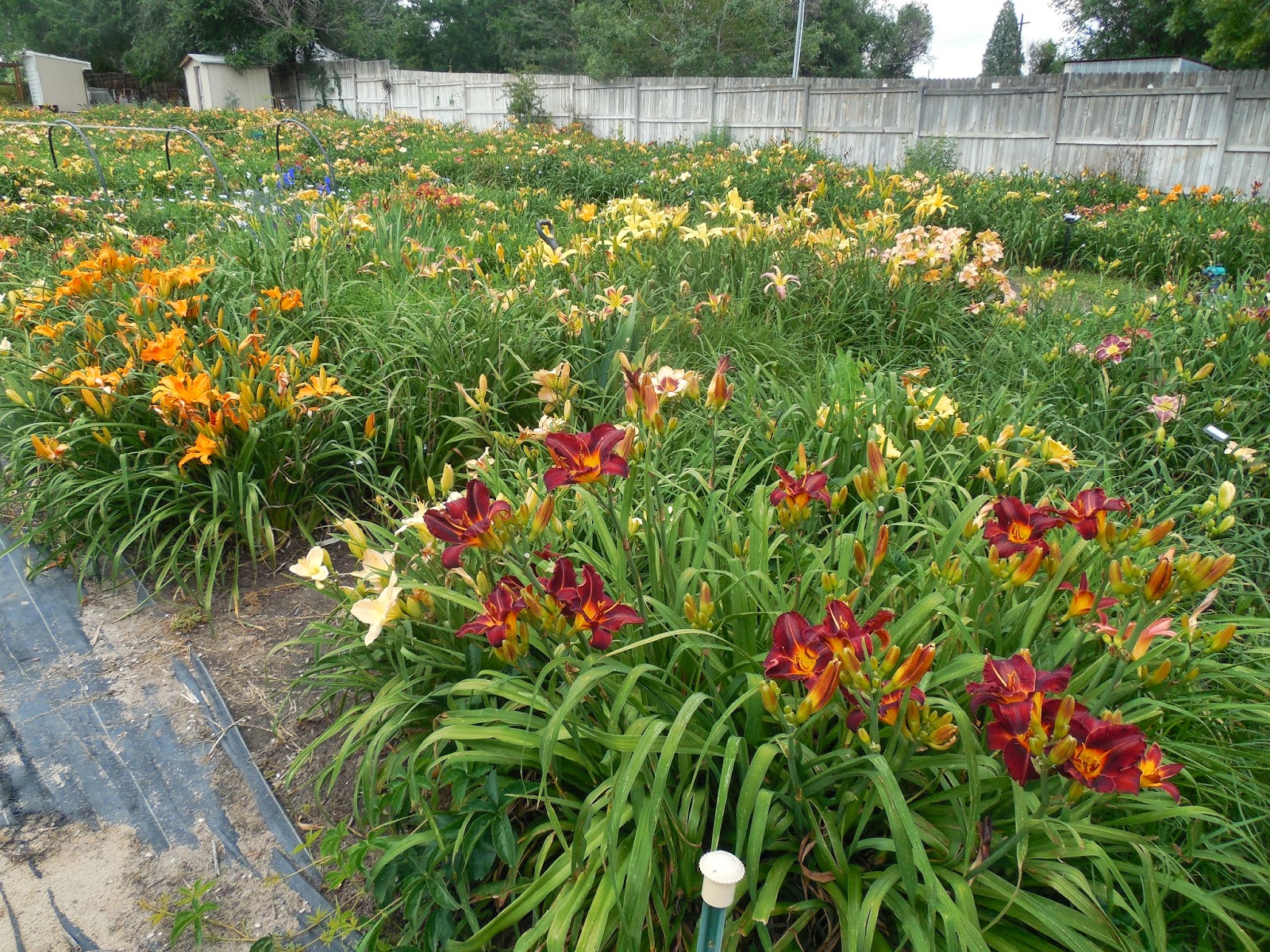 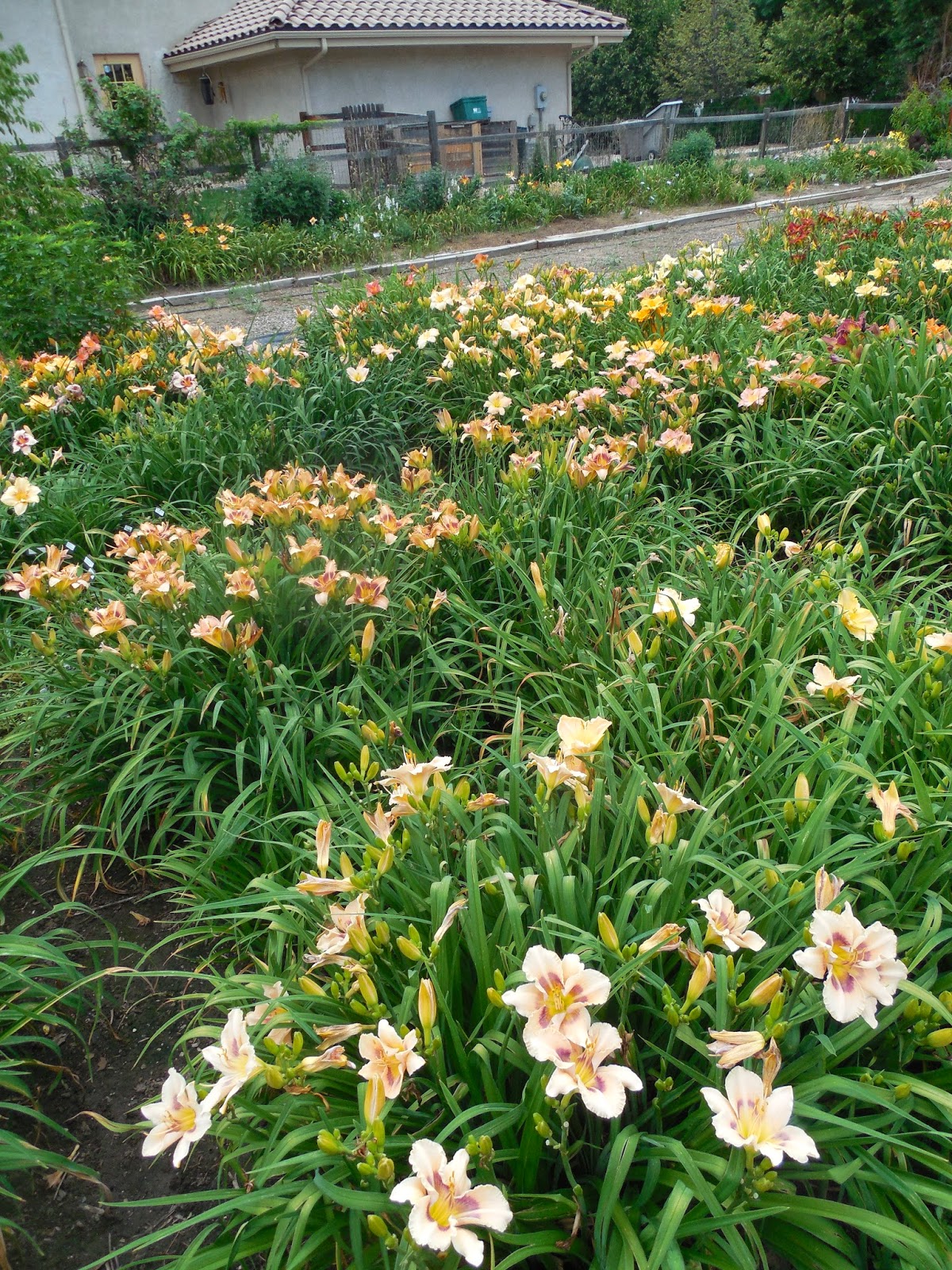 And a grand view of the Baur house...you should see the view looking out from within. 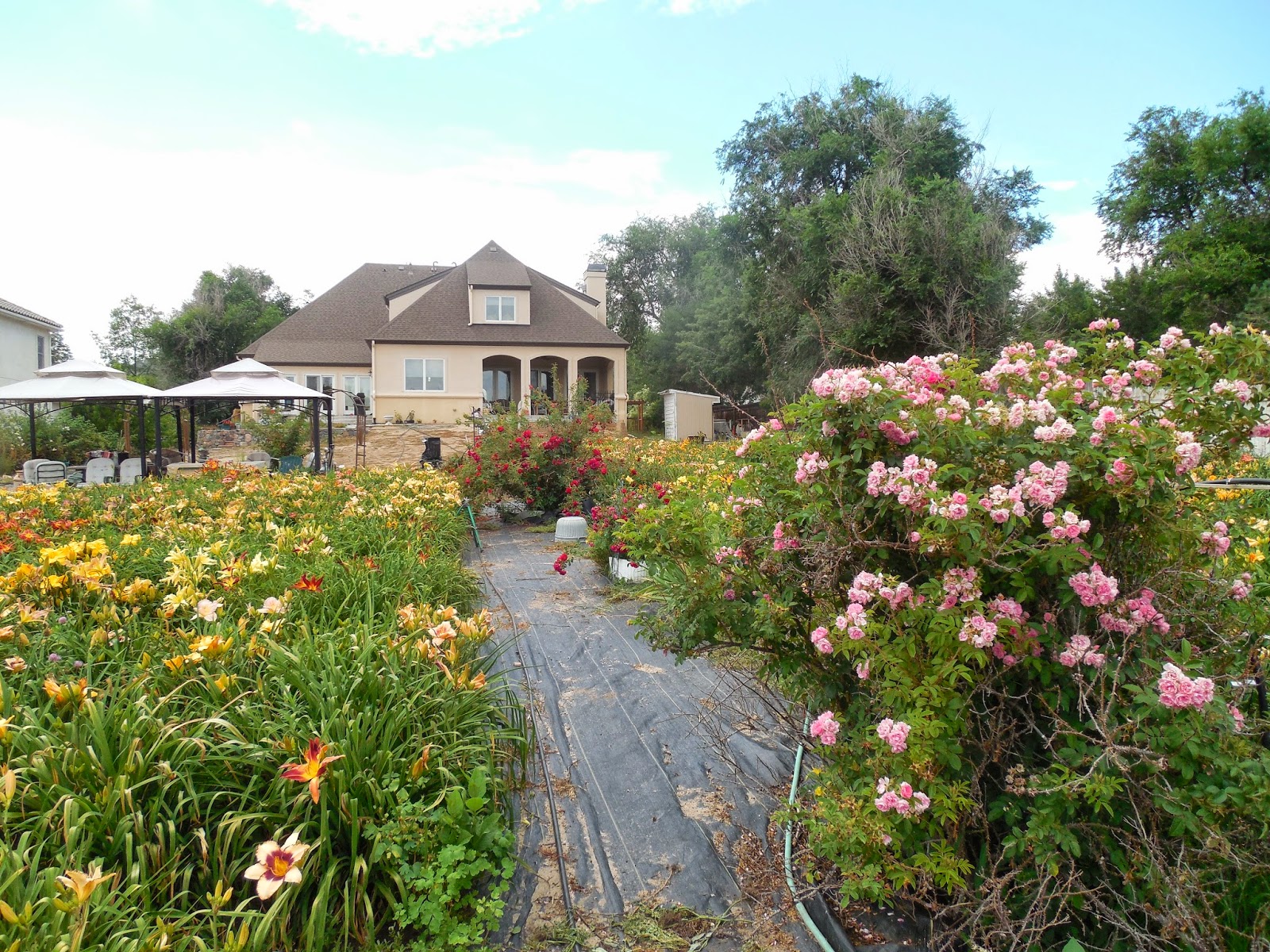 There are a few interlopers, like the giant roses in the middle (which make for a pleasant counterpoint..) 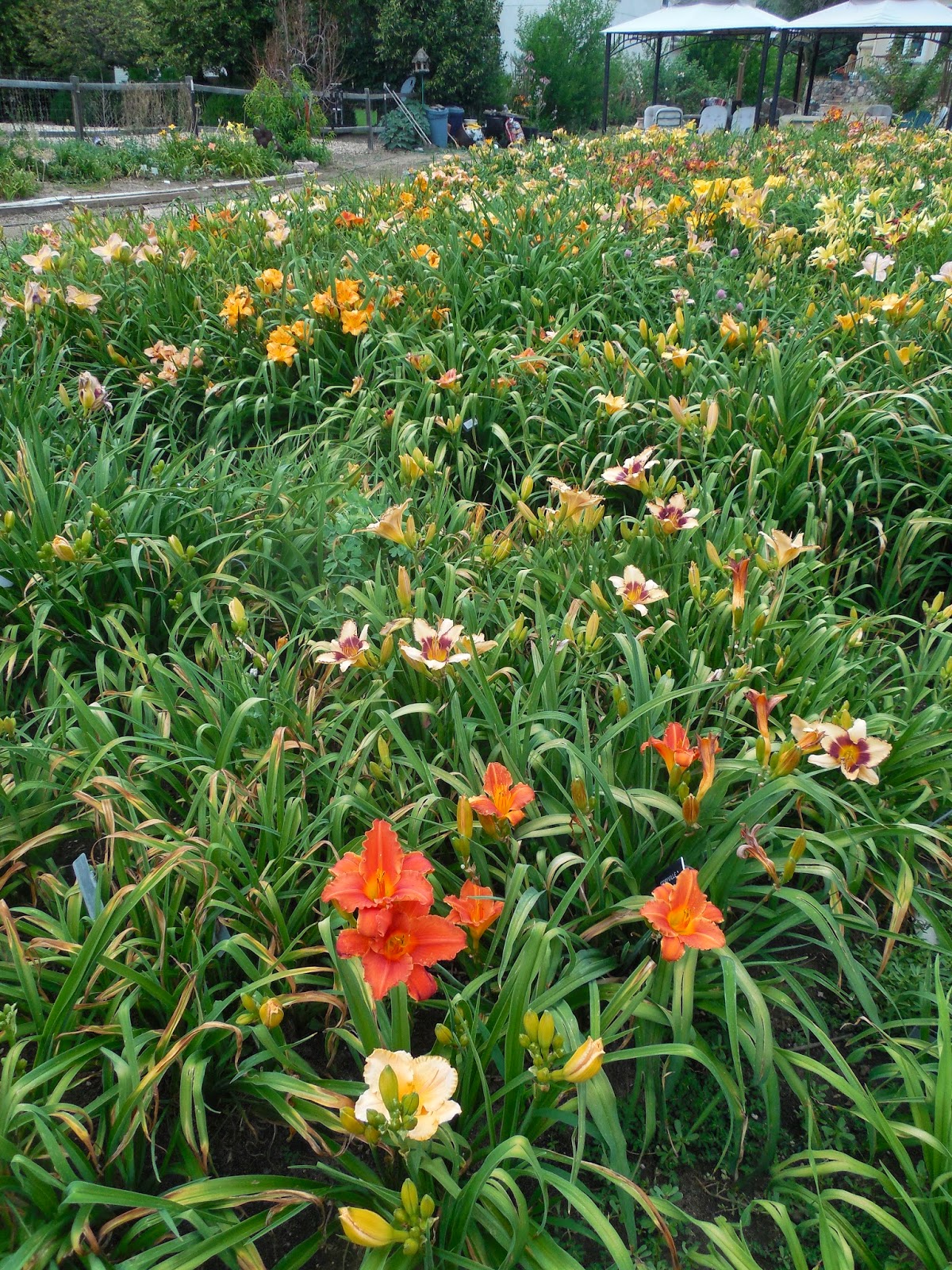 I love the drama of a bright color contrasted with a softer vista of color. I know you want names...they're coming! 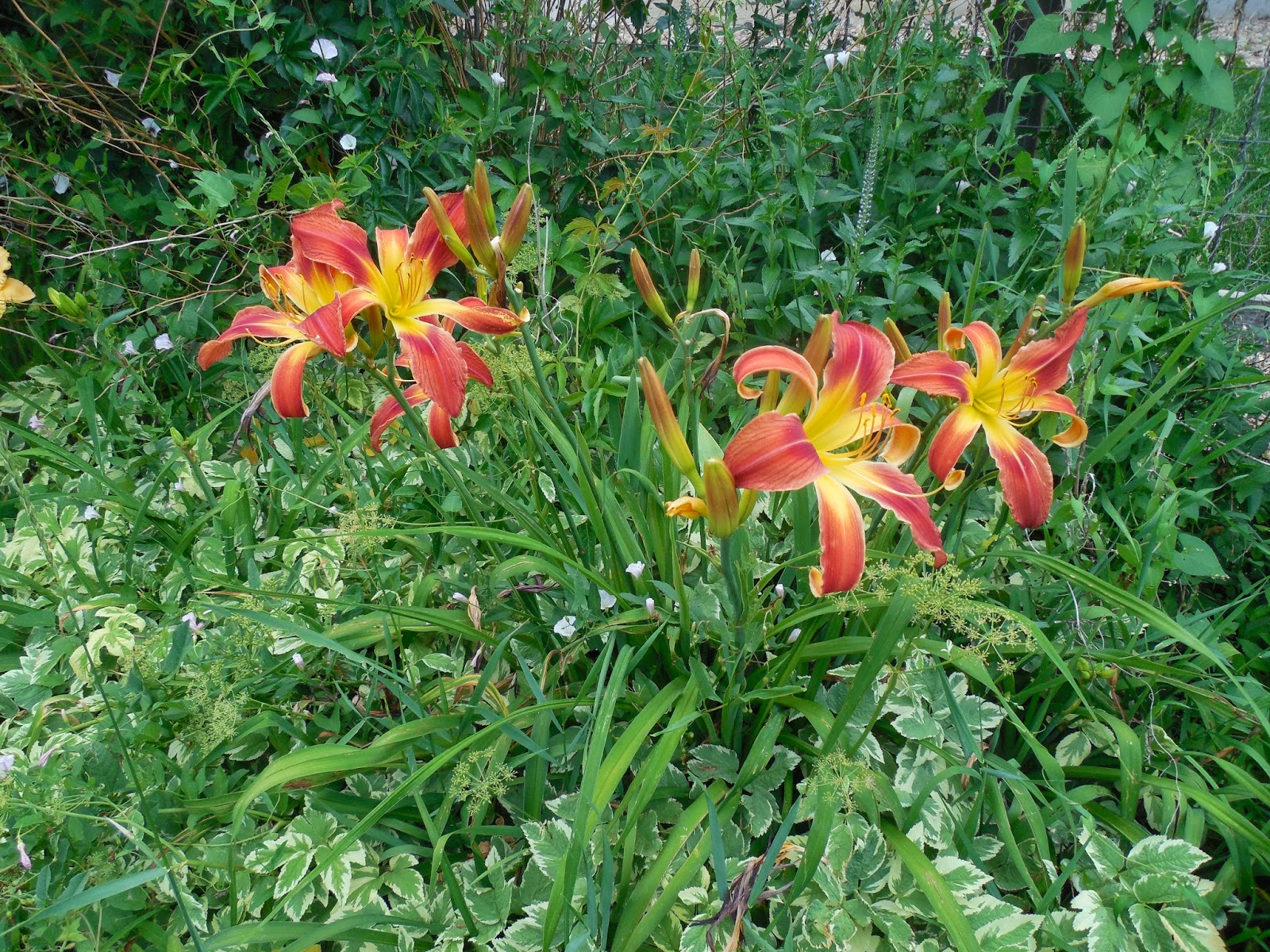 I should have looked around for the name of this one! 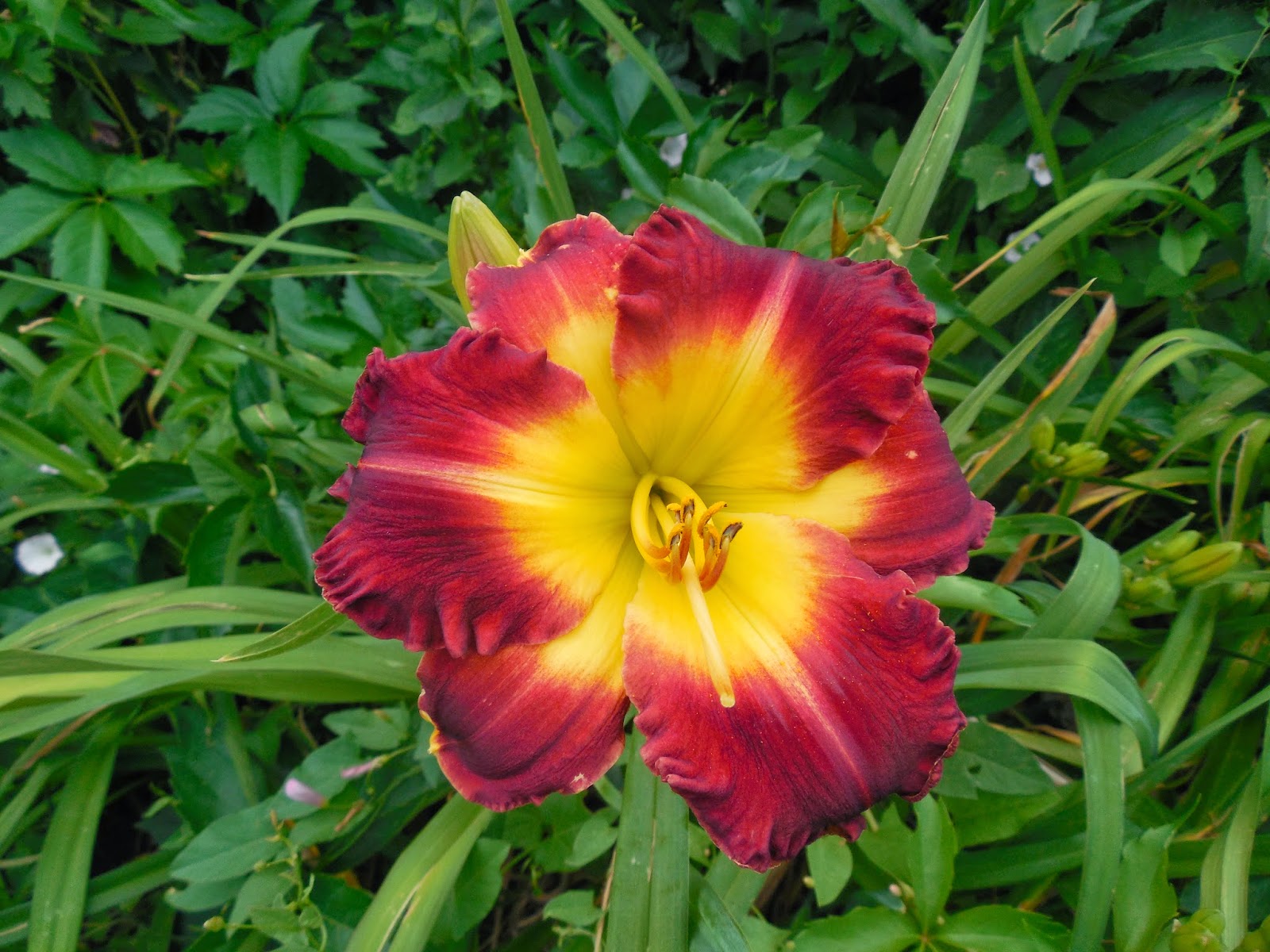 Isn't this a stunner? 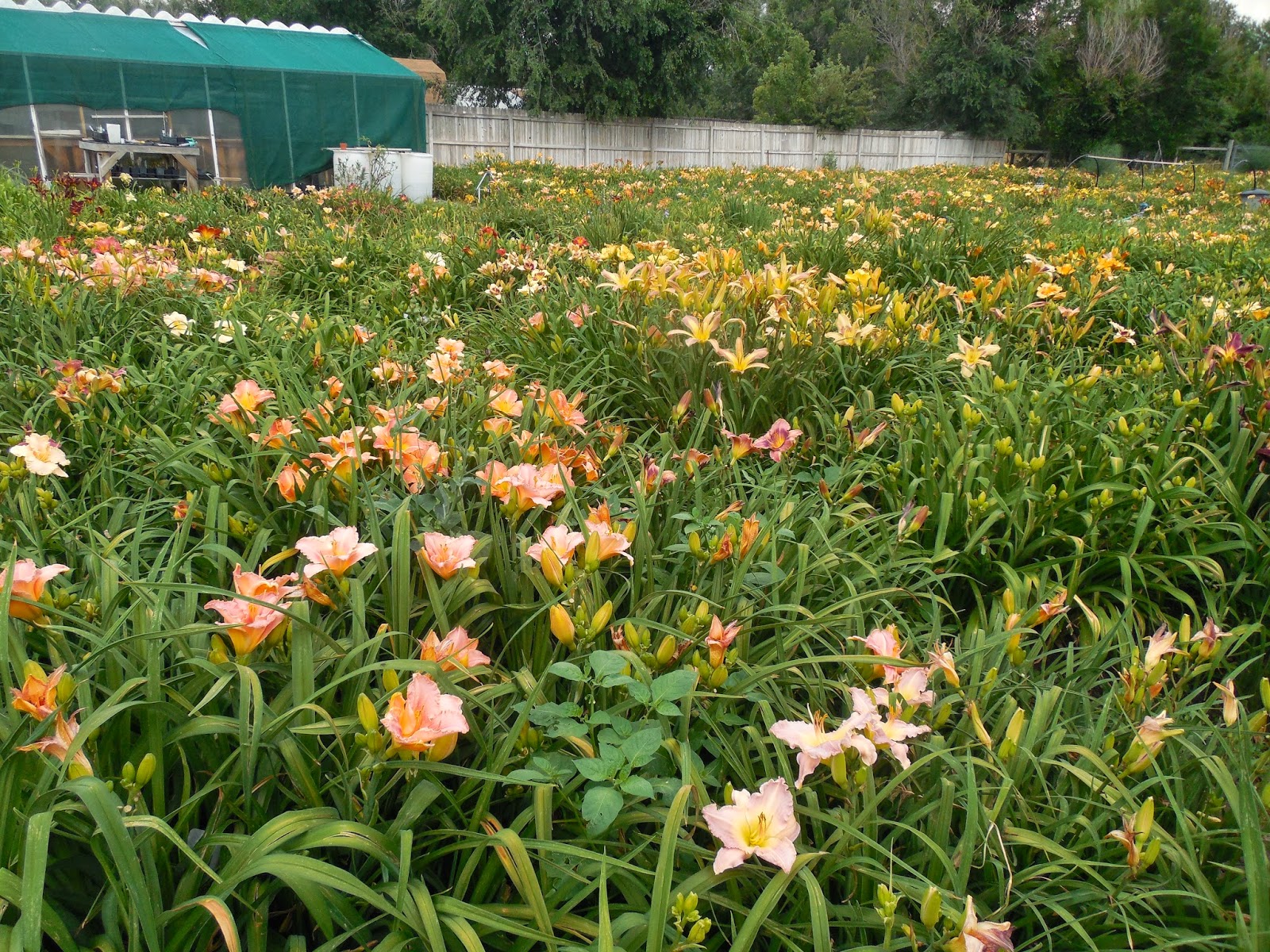 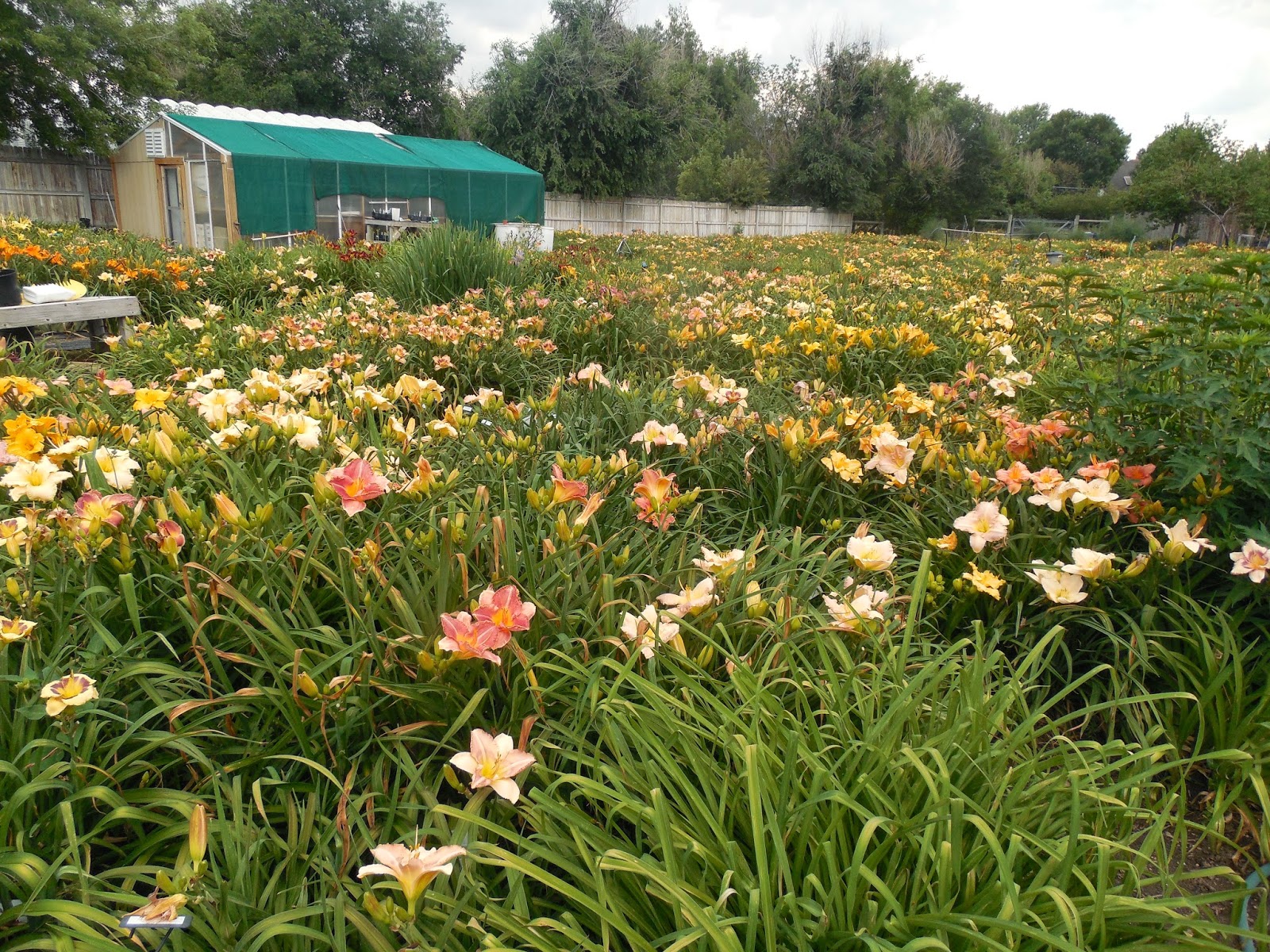 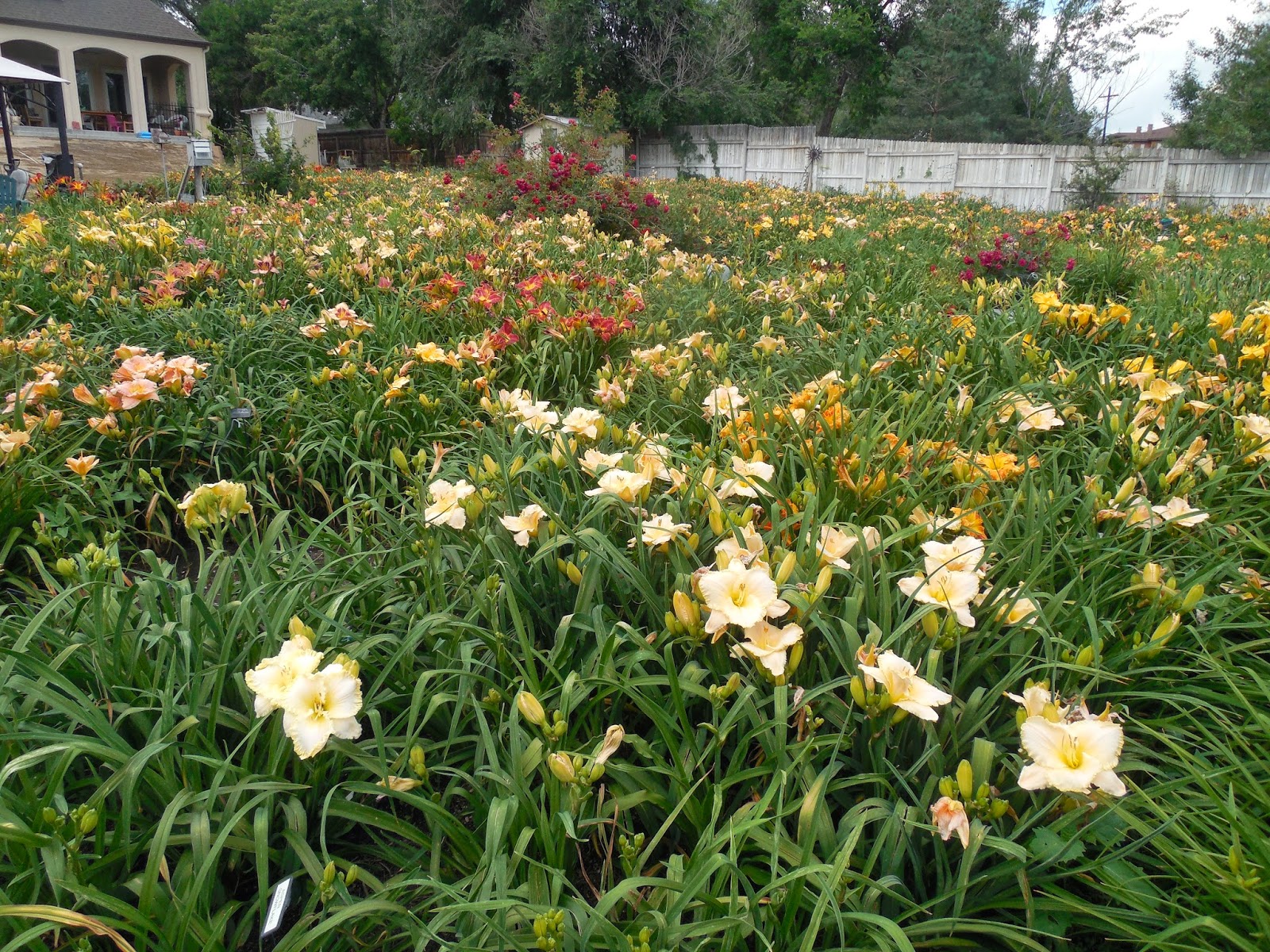 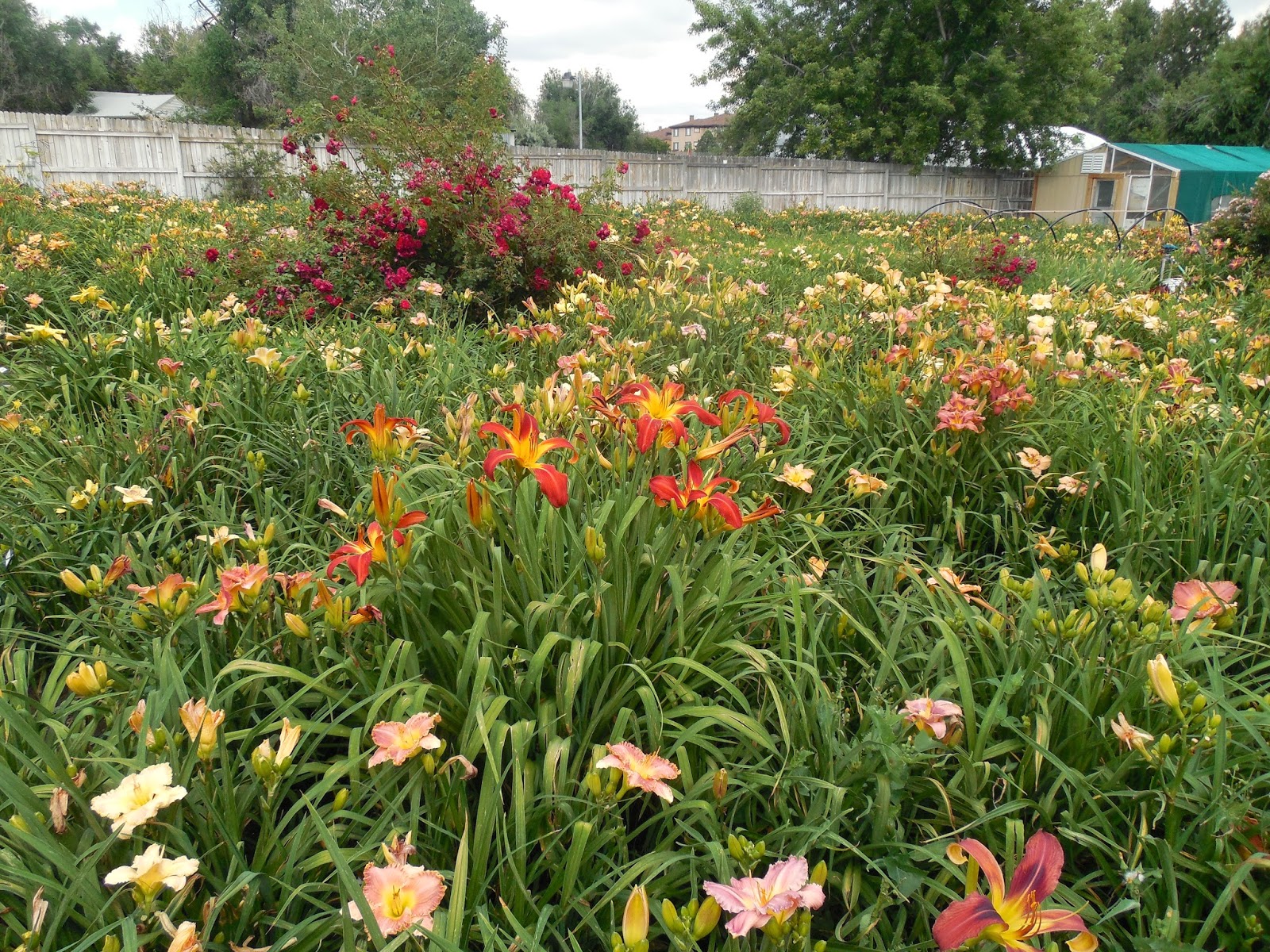 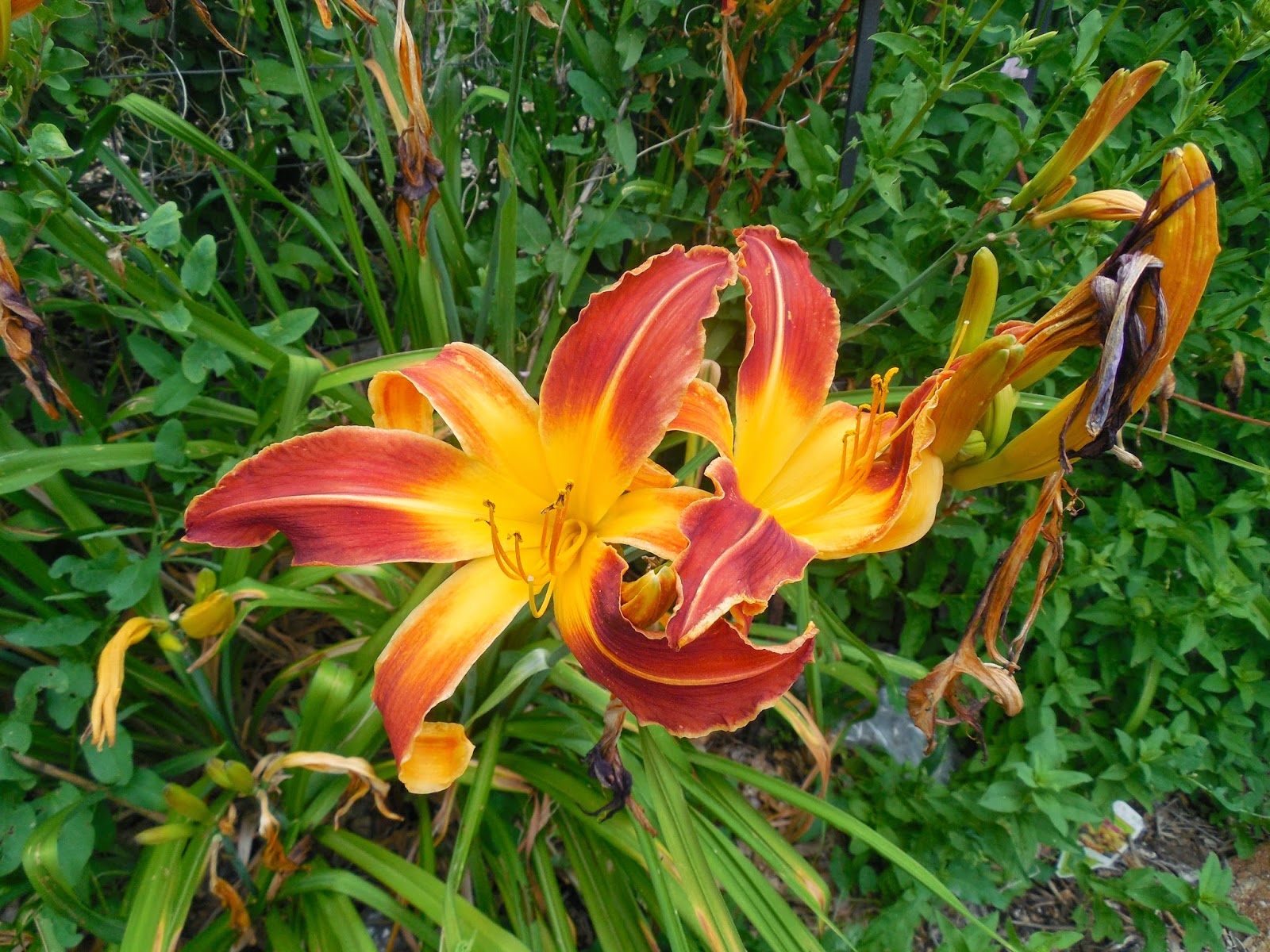 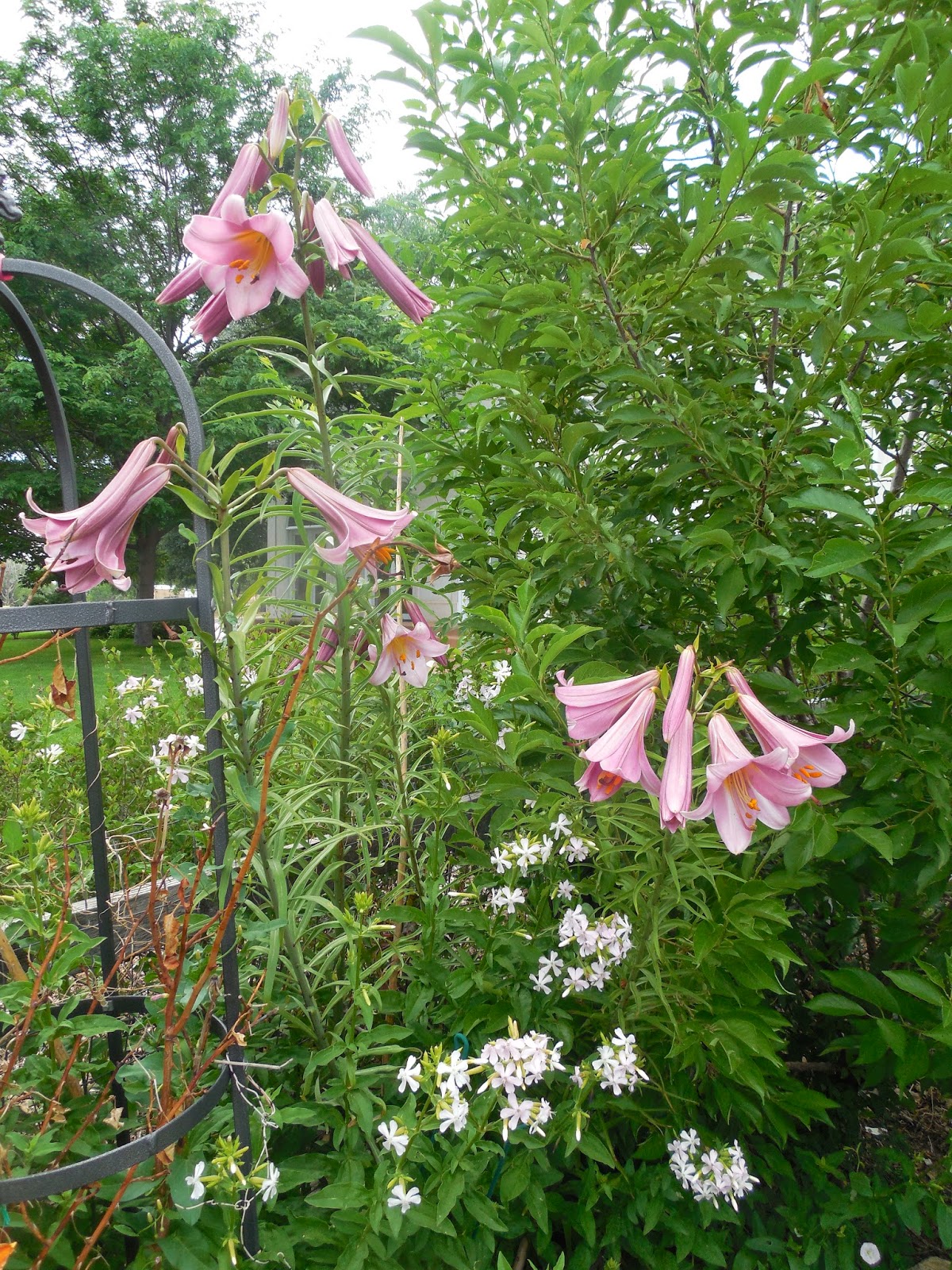 And even a few true lilies around the margins of Sabine's garden--for the heck of it.

She must have the healthiest clumps of Red Birds in a Tree I've ever seen! 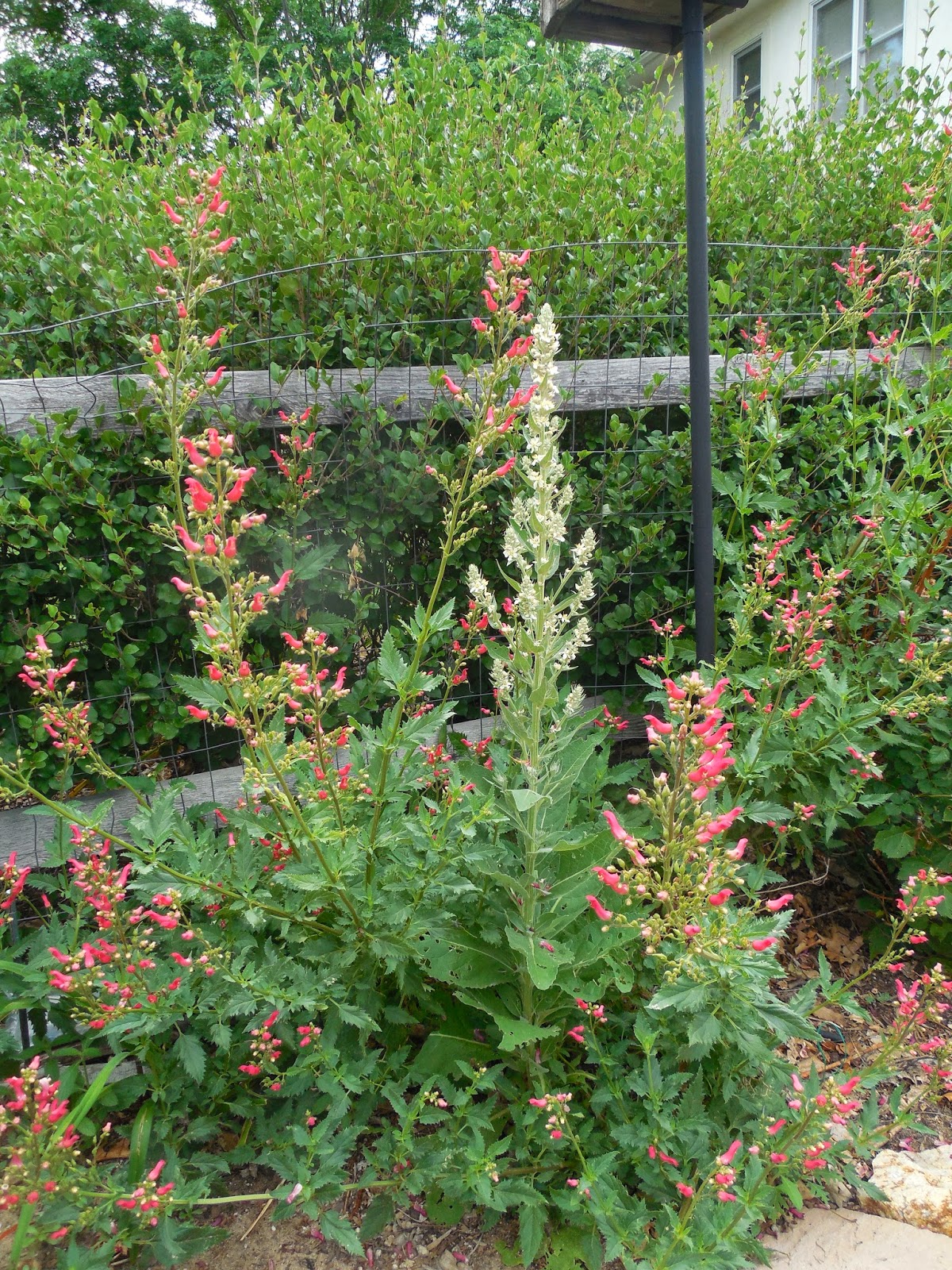 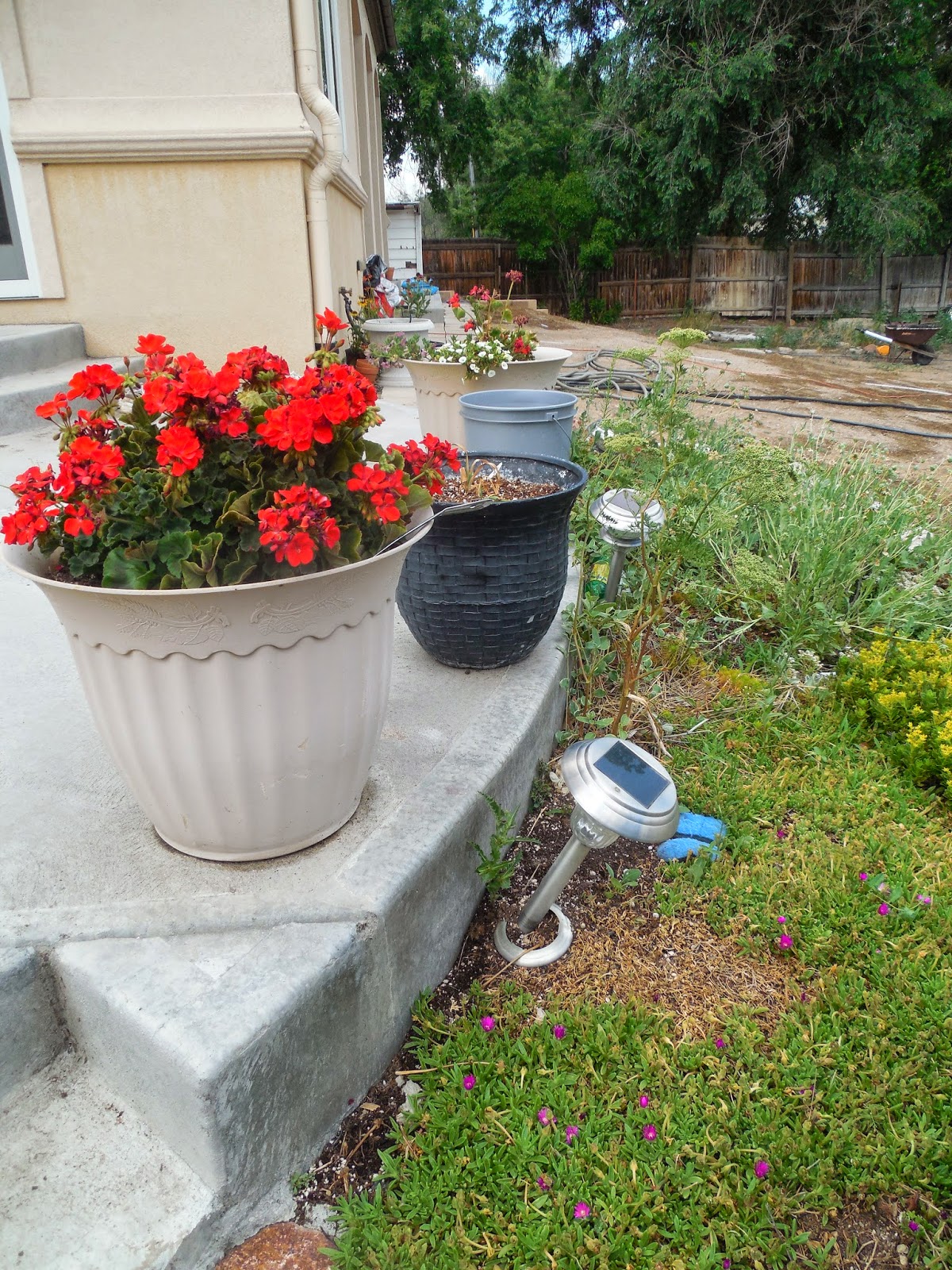 Some great containers and spreads of ice plants too--not ONLY Hemerocallis... 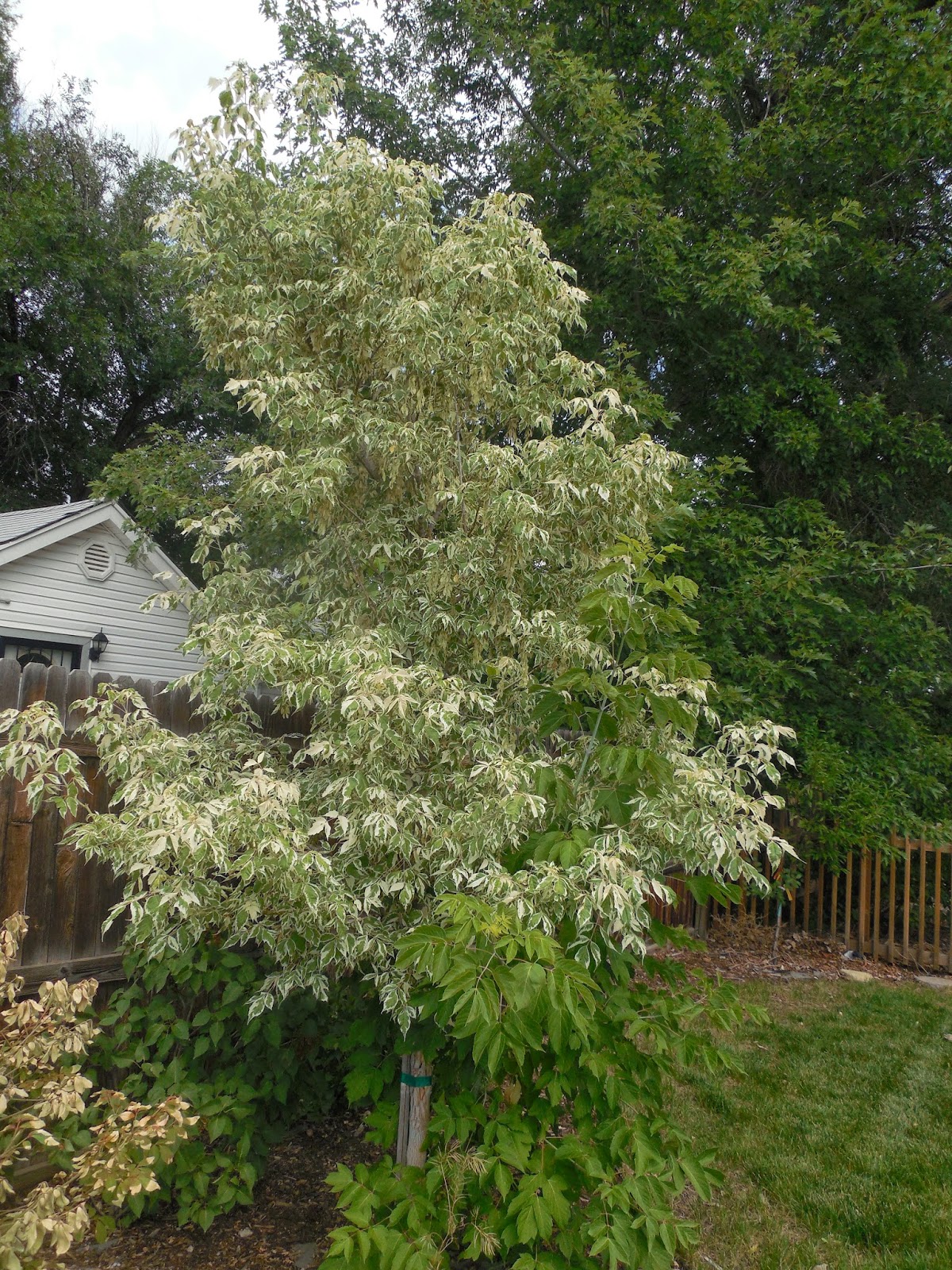 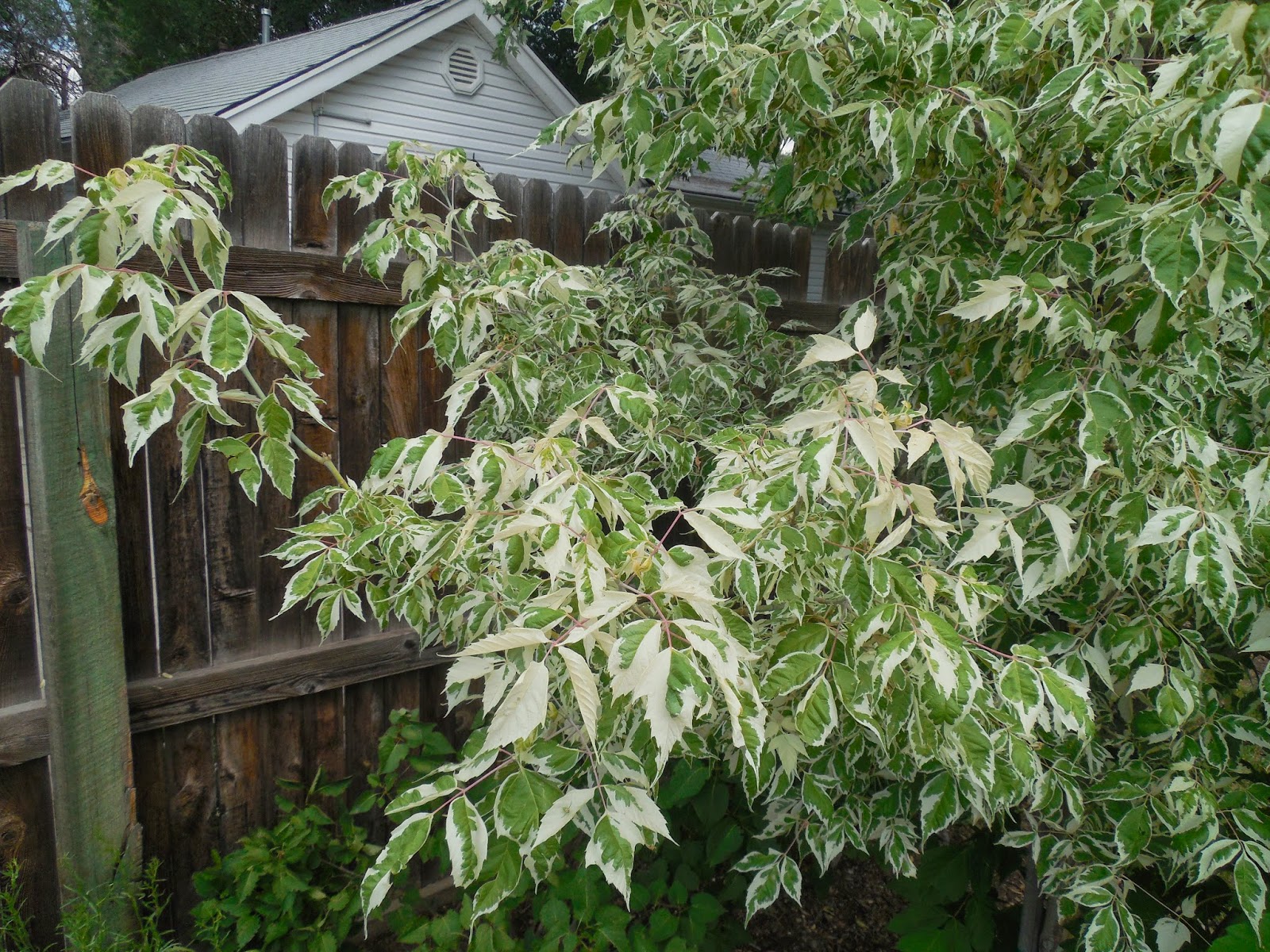 After showing so many unnamed cultivars, I found a few named ones in my files form Denver Botanic Gardens taken last year--I realize it's a feeble effort--but at least I've salvaged a shred of my reputation by including a few hard data!

I have not been a huge fan of Hemerocallis in the past. Living a short ways from Sabine is changing that. Although I confess, I only have a handful in my poor, dry garden (by comparison...)
- July 21, 2014