This picture happens to be in my garden, but I have a whole suite of shots of this lovely phlox I photographed on top of Medicine Bow Pass in the incomparable Snowy Mountains of Wyoming. Hard to believe one can depart Denver, skim past the Front Range megalopolis, drive to the Laramie Plains full of steppe-climate treasures, and then traverse the montane and subalpine and arrive at a vast tapestry of this Phlox, Eritrichium, glacier lilies galore in about two hours. Most years I make the trip two or three times, usually in late June and July. But this incredibly sweet smelling phlox that varies from icy pale blue to deep purple shades is always a grail...


Here is that vista, from on of my many favorite "sweet Wyomin' homes"-- a place I have come to again and again over the past four or five decades. I am actually imagining the smell so vividly of this phlox, a fragrance that wafts up on warmish days (it's NEVER hot up there) and envelopes you with a strangely tropical, muskiness that belies the alpine vistas. Just three little months and I can stand here again...aaaaah.


A little closer view showing how dense the colonies are up there, interspersed with all manner of other alpine gems. Our winter is lasting so long this year (although daffodils are out and the first magnolia blossoms are opening on the x loebneri at the Botanic Gardens' house), our landscape is as sere and harsh looking--freeze dried from a had winter, and sun baked from lots of sun and wind--rather like Wyoming in a way. It's an acquired taste: once you acquire a love of the brash steppe you feel constrained and overgrown after a few days in the perpetual greenery of Maritime climates.

Mugshot of a particularly blue violet form of this cushion phlox. There are other blue phloxes--the two primary contenders are of course Phlox divaricata of the Eastern woodlands,  and Phlox bifida of the southern Great Lakes sandy prairies. I did select a particularly deep violet blue of the latter in the garden of the late great Betty Blake (a plant that may persist somewhere still). Neither of them are quite this winsome a shade of blue violet. Laporte Avenue Nursery is not currently listing Phlox pulvinata (although they have) but they do offer 'Betty Blake' in a good form, but probably not the real form I once grew which was much bluer.


The original collection from Betty's garden was a pretty dark, good blue. But it may be MIA...and I admit that many pulvinata are paler in hue, but there is sure to be one at least as good as Betty up there on the Medicine Bow (or the dozens of other ranges in the west where pulvinata is supposed to grow). And they are sure to have that heavenly fragranc. 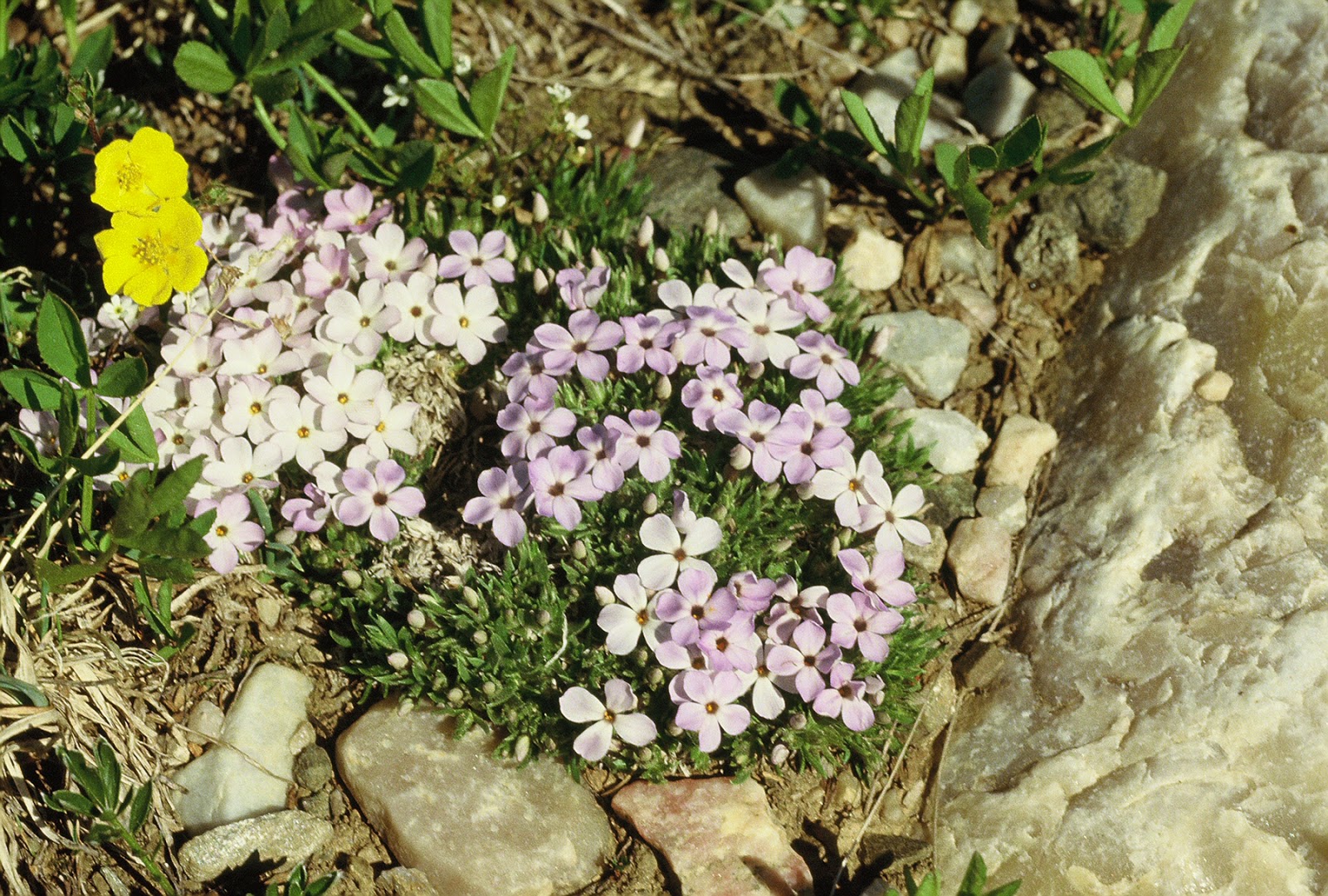 One last lingering look from the Snowies....oh yes, the title of this blog comes from an enchanting song I learned from Gwen Moore, my ex--she would sing it very winsomely on our many trips across Wyoming--it was one of her favorite songs, and remains one of mine. One may divorce, but one stays married to the better memories, which were legion.  It was made famous by Chris LeDoux (famous is a relative term--hard to believe such a really wonderful song isn't that famous in a world of American idol and "Voice" contenders singing songs I find pretty repellent--and let's not even talk about "Rap"--which deserves the parentheses.) This song was written by Bill Staines, one of America's great song writers, whom I've had the privilege of hearing a few times. I link the lyrics to the song here, and click on the two previous links on this blog to hear two very different versions of this song: both pretty cool in their way...the song being a tribute to a great state, and a sort of musical equivalent to this exquisite and little known plant (rather like the song in meriting a little more love!).

A flower. A song. Some memories. A backdrop of sagebrush and distant pronghorn. Our lives are comprised of these quiddities, these tesserae, which gradually mesh and form the mosaic of our personalities, the sum and substance of our souls.
- March 27, 2014