So there! You think all mulleins are coarse and gigantic: here's one that fits in your teacup. I have grown it on and off for decades--and it is currently missing in action in my garden. From alpine heights of Greece: someone needs to go fetch a pinch of seed!

﻿
The queen of dwarf mulleins has to be this gem from Southern Turkey--a shrub actually. It should be required that everyone grow this some day--and I mean everyone! I've seen this grown a meter across at the Royal Botanic Gardens in Edinburgh (and it was a royal display as well!). Apparently quite restricted and vulnerable in nature. I do not think gardens really serve as safeguards (although think Franklinia, alas! which only exists in gardens). But by growing these plants we are reminded how imperative it is to preserve them in wild habitats. A profound and important service of ornamental horticulture that is conveniently overlooked or downplayed by many botanists!
﻿
I trust you notice my Zeus-like demeanor next to Verbascum olympicum...Tim and Laura must have a million of these at Forest Edge--the most extravagant display I've seen--although I did see a similar stunning mass of giant, candelabroid mulleins once in late January at Rhodes in South Africa...I know, I know: I'm out standing in my field!

﻿
﻿
The most delicate and really an indispensible mullein--with bright GREEN and lacy leaves. The flowers are really huge and the stems so fine and hairlike that they look suspended in mid air. And it blooms for months and months. Biennial--but it does self-sow generously...

I grew this honker for several years at DBG, and one day it was gone. Didn't think much about it until I saw it again at Dare Bohlander's garden (where this was taken) and had to grow it again. Handsome brute of a plant!
﻿

I grew this beauty for several years (and even saw it growing wild in Kazakhstan). Although mullein are said to be weedy, this never self sowed despite growing in good habitat I thought. I saved seed--must grow some more!

﻿﻿
Not quite the same as the Verbascum phoeniceum wild forms I've grown but very similar. This is a surprisingly long lived perennial and very adaptable to soil and exposure as well. I wouldn't want to be without it! I believe I saw something just like this in Kazakhstan.
These are the amazing hybrids you can find commercially of  "V. phoeniceum"--surely one of the best plants for dry shade ever (here growing UNDER the spruce tree in front of my house). 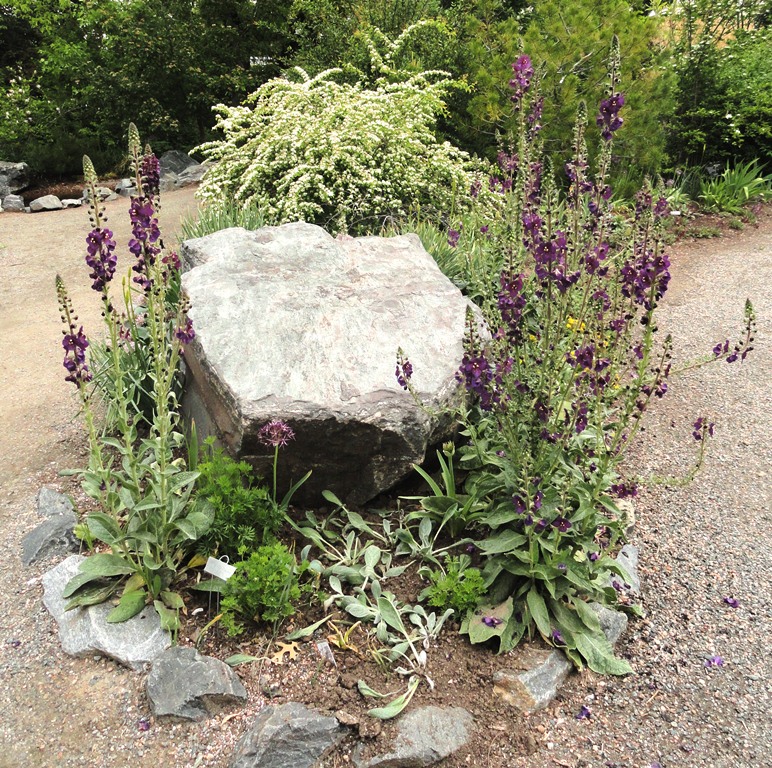 The queen of purple mulleins is, alas, biennial. Introduced to cultiation by Jim and Jenny Archibald, I was thrilled to be able to grow this at the Gardens, and Mike Kintgen has taken this on as almost a crusade: it's fun to see where Mike and his team seem to plant masses these each year. The first year rosettes are scrumptious, white frosted pancakes...and then THIS:

﻿
I have a problem! There is a species of verbascum I have growing here and there, hither and yon: it produces these lavish sheaves of bloom for over a month...and I lost the data on what its name is. I can say, it lives forever, looks very trim even in seed--this may be the best herbaceous verbascum for gardens--and I'm clueless as to the name! Any help out there?
﻿
Who needs flowers? Practically every mullein has beautiful leaves: my picture of V. sinuatum (with wonderfully marginate leaves) doesn't quite cut it...but I notice that when I blogged about the bomb squad, I never showed the premier wooly species in rosette. One year I grew so many there were over 200 stems--which even I think is too many mulleins!

I have now completely blown my cover as rock gardener: anyone who has grown dozens of gigantic mulleins in a lifetime is obviously a bit eccentric, perhaps (I admit it!)...oh well: Pax vobiscum! I mean Pax verbascum!
- February 07, 2013