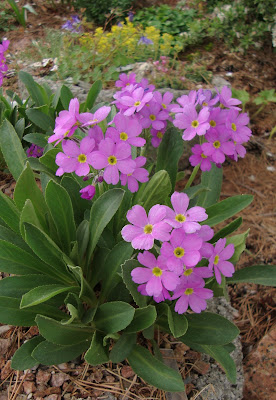 What I mean, of course, is the best American primrose to grow in your garden. There isn't really a best when it comes to nature: nothing could be better than the tundra on Pikes Peak studded with Primula angustifolia or freshets ringed with giant Primula parryi almost anywhere above 11,000' in Colorado. But who would have thought that a narrow endemic that grows only in tight limestone crevices on the summit of the Sandia mountains of New Mexico would settle down happily and bloom year in year out in a shady rock garden and in troughs in Denver, Colorado? Ellis' primrose (Primula ellisiae) has been lumped into Primula rusbyi by botanists, and it is clearly allied to the more southerly plant which is much commoner, growing on various mountain ranges of New Mexico, Arizona all the way to nearly central Mexico. I have only grown the northernmost form well, so I'll stick to the old name.
There are nearly a dozen species (depending on the botanist of course) clustered in the Parry section of the genus Primula. Aside from the two Colorado near-endemics I mentioned at the very top (they grow beyond our state borders, but so sparsely compared to their amazing abundance all over Colorado we can practically claim them!), the Great Basin is filled with micro-species clearly allied to one another, but which I think deserve recognition because they each occupy a narrow ecological niche and have strange little morphological quirks that defy lumping in my opinion. I have only seen a few of these, although I have trod high up on Thomas Canyon in the Rubies looking for Primula capillaris (at the wrong time of year: it was undoubtedly dormant), and I stopped several times in Logan Canyon hoping to glimpse Primula maguirei. I have great affection and respect for Tass Kelso and Noel Holmgren who would gather many of these little Great Basin waifs under the umbrella of Primula cusickiana. But geography and habitat are so distinct, and some of us cling to habit and tradition. I have been lucky enough to tread through acres of the microform of Primula cusickiana that grows in amazing profusion here and there on the White Cloud Peaks. And I have seen where its lowland cousin grows around Boise. Perhaps I shall even go there in a few weeks to finally see it in the chlorophyll, as it were.
I only wish I could grow some of these Great Basin blues: I have heard one or two of them can be tamed, so one day perhaps I can post a blog with an icy blue primrose depicted. Meanwhile, you can enjoy (as I will in a month or so) this rosy wonder from New Mexico! You can even buy yourself one if you wish (as Primula rusbyi) from Laporte Avenue Nursery.
- February 25, 2011