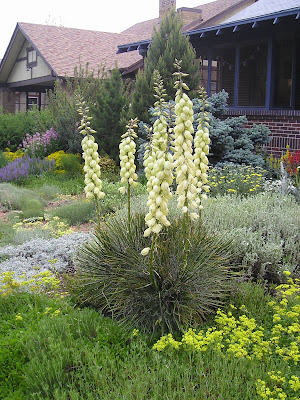 There is something funny about 'em all right! Especially a cluster of miniatures that are found here and there in the Intermountain region: above is classic Yucca harrimaniae, from the Uncompaghre plateau of Colorado (in my old Eudora garden): it has a much narrower inflorescence than Yucca glauca on the eastern slope. It has whiter flowers produced several weeks earlier, and of course it tends to have leaves about half the size as glauca. It blooms reliably each year, and is tough as nails: I am amazed it's not more often grown. 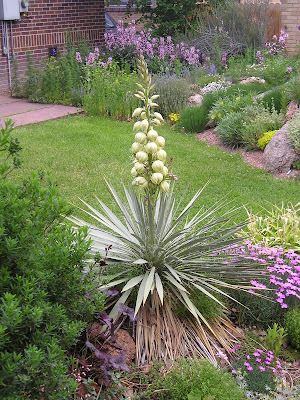 This much dwarfer and wider leaved variant grows in the Uinta Basin of Utah: I've seen it growing for miles along one road near Roosevelt: it was named Yucca sterilis by Stanley Welsh since he's not ever seen it with seed. I have a hunch Pronubia moths might be scarce in the Uinta Basin! Although I've never had seed at home come to think of it either (probably for the same reason!)... I find it amazing that a desert plant like this adapts so well to an alpine bed (lots of Daphne cneorum cvs. nearby in my Eudora back yard). 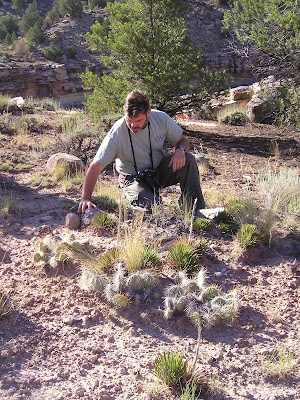 The last picture shows Sean Hogan worshiping a tiny colony of the smallest form that has been segregated as Y. nana. You should be able to pick out four green rosettes around the silvery Opuntia erinacea (another fabulous plant...). The picture (by the way) was taken near Paradox, Colorado (an oxymoron if I ever heard one!) For a while Mountain States offered gallon pots of the miniature yucca from seed collected around Moab for $10.00. I bought a few and they have thrived, but are a tad bigger than in nature (the one below is in my Quince west ridge garden). Whatever we call these tiny treasures, I would think there's a spot in almost every garden where they would look just perfect. And that's no joke 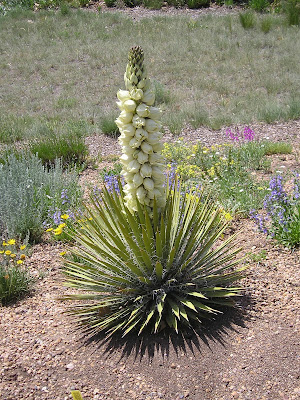