Many onions had a habit of seeding about--and this (one of the loveliest) has been known to do so: but in a crevice? Why not I suppose. Over the years I've tried many plants in crevices--but the best ones--like this--often volunteer!

It seemed like a good idea...and it bloomed nicely. Alas, it's not there any more (too many crispy days this June).

The Campanula (like most campanulas) is a natural for crevices. And delospermas seem to take to them as well.

I am very aware that this will not be cold hardy--but why not try it for the summer. I have some D. cymosa nearby that are just as happy--and hopefully hardy. By summer's end this should be pretty impressive--and not too hard to pop out to overwinter in a pot.

Another volunteer--and the best looking specimen of the species in my garden. But it does look good on the flat as well.

I don't remember planting this, but I must have. I've seen no end of Scabiosas and their cousins on Mediterranean cliffs, so this is not a surprise.

NOT what I expected let alone planted! I've left it for the nonce: I don't think it will bloom this year. After it blooms it should expire. I've noticed many of species of mullein in Greece and Turkey love rock walls--so this is not a surprise. In fact, Bob Beer has a picture of himself alongside one of these on Ulu Dag growing pretty much the same. 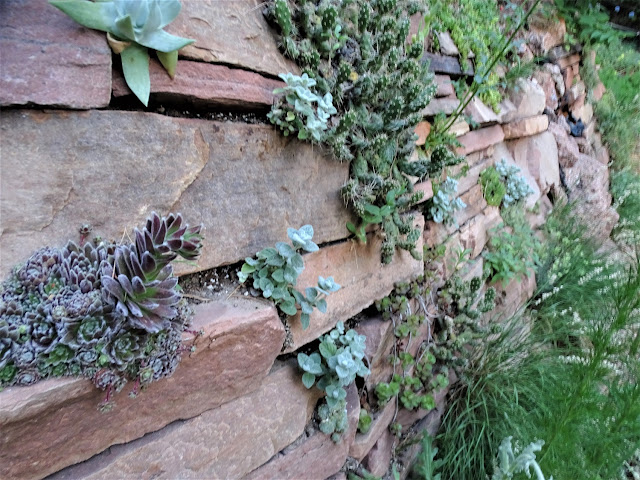 A picture of a small portion of my wall this morning: from left to right--Sempervivum arachnoideum 'Stansfield' (which must be a hybrid not the species) is probably my best of the genus in rock crevices--although many will adapt. Above it the same Dudleya--but the white tufts dotting across are all Origanum dictamnus: When my plants from last year came through so well, I couldn't resist adding five more-which should make quite a show in July and August when they bloom: the classic chasmophyte of Crete, my ancestral home.

Growing with it a slightly too vigorous plant of Opuntia fragilis which may have to go...

My biggest surprise this year was seeing this most unlikely mullein show up and bloom: the rosette is so un-mullein like: lacy and green. And the stem is so wiry the flowers seem to float: I hope it will seed around more--despite its size, I love to see it here--and the honeybees and butterflies agree!
- June 18, 2020