Early June in the garden

It may have rained two inches last night (June 9th) so many of these flowers are nodding, although their roots are undoubtedly reveling in the drenching moisture. Surely one of the most garish of Alpine flowers, I always look forward to the virulent orange of this lily in early June,
I am so pleased at how the clematis has adapted to the dry slope in front of my house I planted a dozen more (hope there are some whites among them). One can never have enough Orlaya--a very flashy little annual that is a good neighbor and welcome in large numbers!

There is a bit of local history to this plant--first planted almost 20 years ago in a shady bed north of our Boetcher building along with various Epimediums. Irrigation was spotty--and many of the Epimediums petered out, but this spread to make a groundcover almost 8' across. Knowing that bed would be destroyed when the Freyer Newman center was built, I requested that the Vancouveria be lifted and propagated. Katy Wilcox (our chief propagator at the time) had flats and flats of this available at the fall sale a few years ago (this is one of my two trophies from that sale)...I hope the dozens of customers who bought this at a ridiculous price ($5.00 I seem to recall) know what a bargain it was. And I hope they all grew for them.

I am looking forward to this forming a little patch in the coming years!

Toughest of the South American "yellow eyed grasses"--I know it's been given another name but what the heck.

The flowers are really enormous for the genus--almost 2" across!

Probably my best performing cushion pink--I have big clumps of this all over my rock gardens--and they always produce a good show.

When something likes you and your garden, it's important to plant young ones--since the big ones will not last forever.

I started collecting fleabanes. I figure if I have enough in my garden, I'll begin to recognize them. This is another mystery species I have had so long the label's disappeared.


Another plant I've grown for years--but only in the last few years have I found a spot where it really shows off.

Recently promoted by Plant Select, the "Mongolian snowflake" clematis has been one I've struggled to grow well. It produces a few lax stems--but this year I renovated the bed around it hoping it will produce the massive show it does at Denver Botanic Gardens. Introduced by the late Harlan Hamernik--a dear friend and mentor.

This found the sweet spot in my garden, and is starting to seed about a tad more than I want. But so be it--it's a really bright spot of color for many weeks in early summer.

Smaller and earlier, this is abundant in northern Yunnan and I'm glad to have it in my garden. The larger and later A. consanguineum is just popping up nearby.


Green flowers generally don't make the cut, but everyone who sees this one wants it. I have a number of seedlings planted nearby--some day I hope to have a whole slope of this great local native.


There are a number of rose-violet flowered senecios in the Drakensberg. This has turned out to be the best in my garden--not seeding about at all (alas!), unlike the profligate (but lovely) S. polyodon. The winter rosette on macrocephalus is 8" across: glossy and lovely. And it seems to grow in quite a range of soils and exposures, blooming on and off all summer. I rate this very high on my personal scale of gardenworthiness. It's a keeper!

First of the Saintly lilies to bloom: I believe this could be dubbed St. Fulano's lily from Spain. St. Bruno's and St. Bernard's come later and are much bigger.

I know Campanula persicifolia is common as dirt--as are Nigella. But I wouldn't be without them. Plant snobbery is boring. 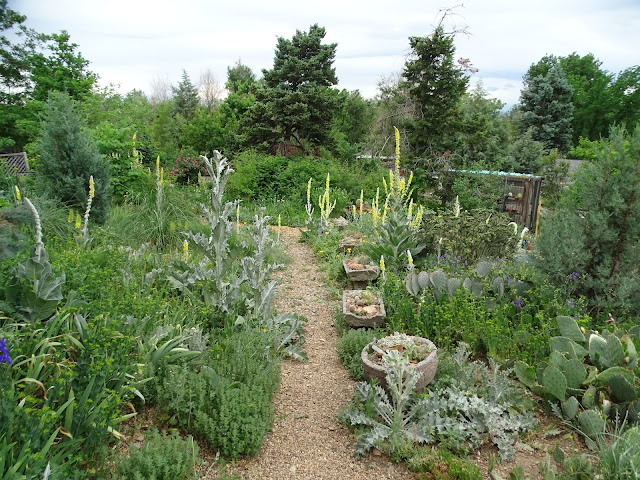 Troughs with xeric plants (mostly miniature cacti--but a few perennials and annuals that tolerate complete baking) line the path between the "ridges"--supposedly Eastern Hemisphere on the left and American on the right. Of course, the mulleins don't care about geographical niceties! 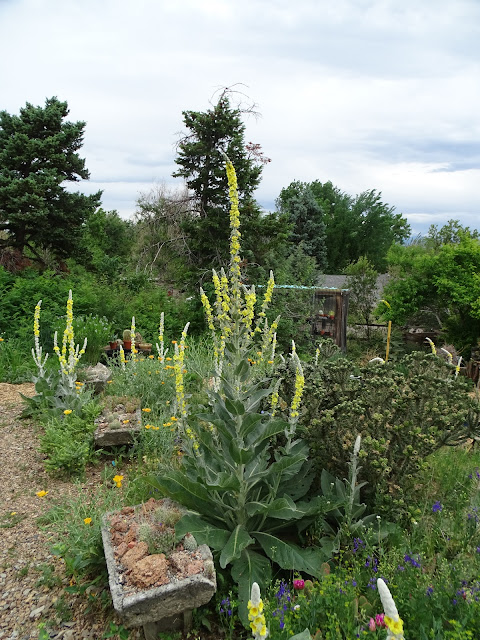 I've grown a dozen species of mullein the last few years, and a large percentage of my plants turn out to be hybrid (and thankfully sterile). They bloom pretty much non-stop for the next three or four months--what stamina! Especially since they're not watered here ad summers are long, hot and frequently dry.


Equally welcome, prickly poppies seem to be spreading (to my delight). They do have sharp little prickles--which I welcome. This is one of a half dozen or so native wildflowers that grew on this property when we bought it that we encourage to stay and spread, Tradescantia occidentalis and Mentzelia nuda being the other favorites. The three native Ambrosia, however, are among my worse weeds--go figure. 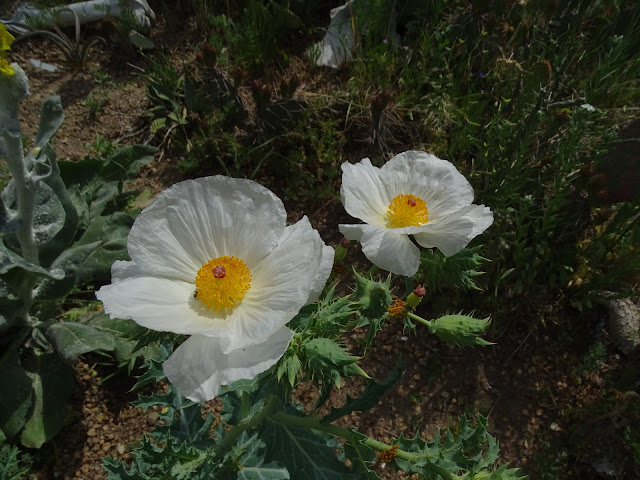 Can't get enough of those flowers! 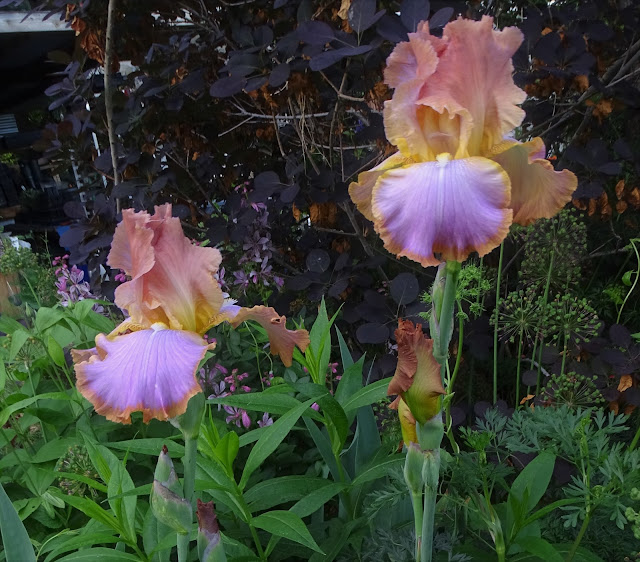 Jan's favorite bearded iris. Mine too: and of course I forgot the cultivar name. Check back--I'll see if I can find it (I have thousands of pictures in my Iris files--where to start looking?)

A final vignette from the rock garden, which has lots of color as well as dying bulb foliage. There is a cost to trying to grow everything!
- June 09, 2020