Finally! [glimpse into the workings of a plant nerd's mind]

Not terribly showy, perhaps--but when this came into bloom a week or so ago, I jumped for joy. This reminds some of an umbel, like Bupleurum or Hacquetia--but Chrysosplenium is in the Saxifrage Family: with dozens of species found throughout the North Temperate zone--mostly in alpine habitats or the arctic. I obtained this one from Far Reaches Farm--who are about the only nursery purveying the Genus. I first saw this species thirty or so years ago my first visit to Jacques and Andrea Thompson's fantastic garden: I was so dazzled by that garden on that visit I neglected to ask for a piece of this little saxifrage: a year later when I got around to it, Jacques apologized "I got rid of it--it was spreading too fast!" This is the commonest European species, spreading across the Caucasus to Central Asia. But there are other reasons the genus tugs on my heart and on my mind...

This strange creature is the Colorado manifestation of the genus--found most abundantly in the Front Range of Colorado--which I admire almost every day from my property (except when it's cloudy). There are dozens of records of this species you can research yourself on Seinet--mostly from Alaska and the Canadian subarctic where it's widespread and abundant. I have an abiding interest in the Saxifrage family, and have found every species in the family in Colorado EXCEPT this little munchkin--photographed here by my friend and enthusiastic alpinist, Frank Morrey.

I have searched for this at several of the classic locations where it's been collected: since traveling abroad will be difficult this year--perhaps I can finally find my native Golden Saxifrage. It's ironic that although I've not seen it in my own back yard, I've found it around the world in the Caucasus, the Altai Mountains and a wide swath of southeastern China.

Here's my only shot I took ten years ago last summer above the Romanovskij spa region of Kazakhstan's National Park in the Altai Mountains. This is the prevailing species found there...I regret I didn't get closer for a closeup.

We drove a short ways north of the town Kasbegi towards the namesake peak when we found a large colony of what appears to be the widespread Chysosplenium alternifolium (C. dubium is also recorded from Georgia--but it has greener flowers). There is only one record for a Chrysosplenium from Georgia recorded on I-Naturalist (and amazing website that has millions of photographs of all manner of wild animals and plants)--and ironically it seems to be from the same locality as my picture (or very near!)
The real center of distribution for the genus (as with so many alpine plants is China) and sure enough I encountered quite a few Golden saxifrages on my trips in 2018 and 2019. In an obscure valley on a gravel road leading from Zhongdian (Shangrila) to Sichuan we found several golden saxifrages. Although not quite as bright as others, this has a succulent, foliage and chartreuse cups...


In a somewhat more exposed spot on the mountain we saw this glorious species carpeting the ground in gold.
Even brighter, perhaps, than alternifolium--I must add this to my order from Kelly and Sue! Can't believe they have this! Stragenly enough, I-Naturalist only has one sighting for this species--from much further south on the Yulongshan. I must add this locality to their database!

The plant seemed to demand a few more pictures!
And what on earth is this weirdy? Maybe an uppity C. griffithii?

And yet one MORE species of the genus on the same mountain (I think it makes four on one mountain). This appears to be close to the one we saw at Shika Shan a few days (and long ways) further on the trip. 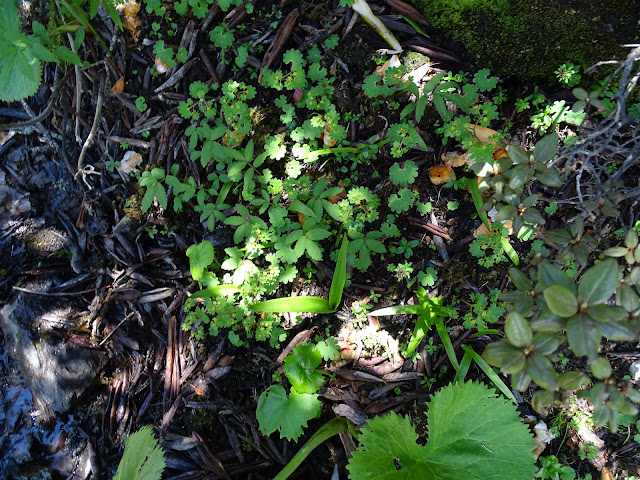 Almost invisible from far away, I'm glad I learned over to examine this one more carefully...

I've enlarged the shot from the last picture to show how distinct the foliage and flower are on this strange taxon. The Flora of China lists 35 species as growing there, twenty of which are endemic:

And on Shika Shan (quite far from the Hong Shan populations) we also found the same species again in a similar shady habitat we had seen before. I only just noticed the strange (and homely) Androsace I accidentally got in the picture right above the golden saxifrage! It's useful to reexamine old pictures!

You are not apt to see many Chrysospleniums in many botanic gardens--although if it's rare and choice you can expect to find it at Gothenburg: here is one of several enormous spreads of Chysosplenium--this one was photographed in the late summer--so the flowers weren't there to help name it.

After all these chartreuse, greeny and gold Chrysosplenium species, there is at least one MORE that breaks the mold:

Blooming several weeks before the yellow one nearby, this is the first year that the purplish C. macrophyllum bloomed for me. This is found far to the East and North of the areas I have explored. I have tried growing it before--and failed (I thought it might be too cold in Colorado for it). But after this extremely protracted, extremely cold winter, who should pop up but this outlier in the genus. I've been warned it can spread (I'm hoping our steppe conditions will help keep it in check). Do Google this species and you will see why I was so pleased! Thank you James Dronenburg and Daniel Weil for doubling my collection of Chrysosplenium.

Now if only I can find our local species growing in the wild!