Paradise in peril: tale of woe and wonder. 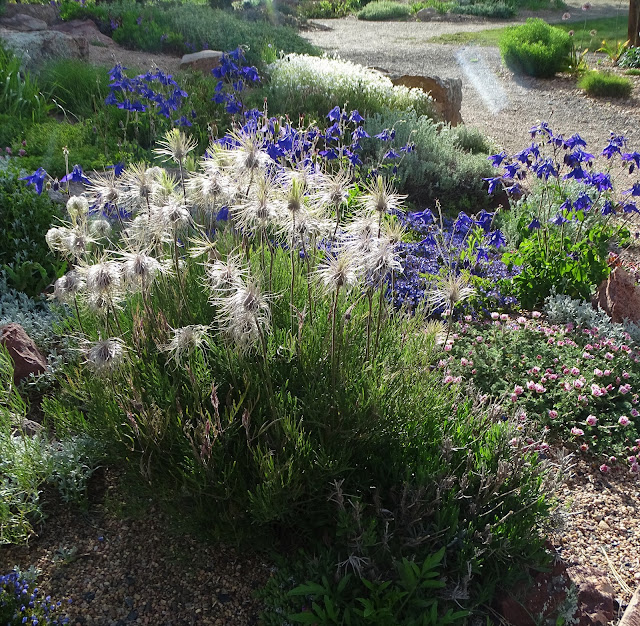 Once upon a time, as fairy tales generally start, there was a park that suffered terribly from the drought. A large area of bluegrass actually died, and it was replaced by a magical garden where Alpine Columbines (Aquilegia alpina--in the back) romped around our sugarbowl clematis (Clematis hirsutissima) in the lovely late light of afternoon. 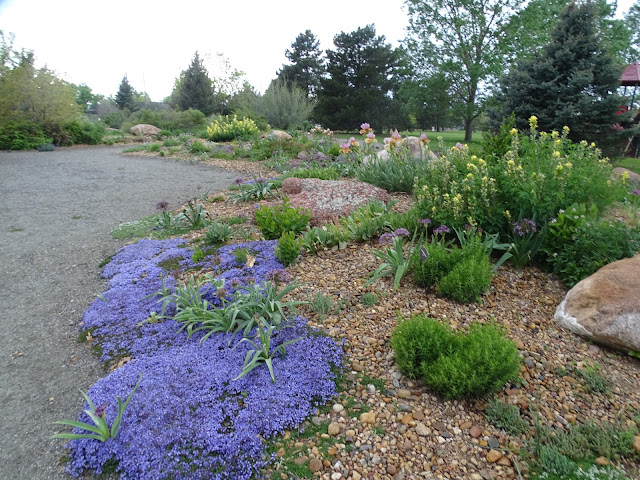 Wonderful sweeps of groundcovers flourished, like Turkish veronica (Veronica liwanensis) and no end of treasures.... (but danger is lurking there, although modestly still: visible only to the discerning). 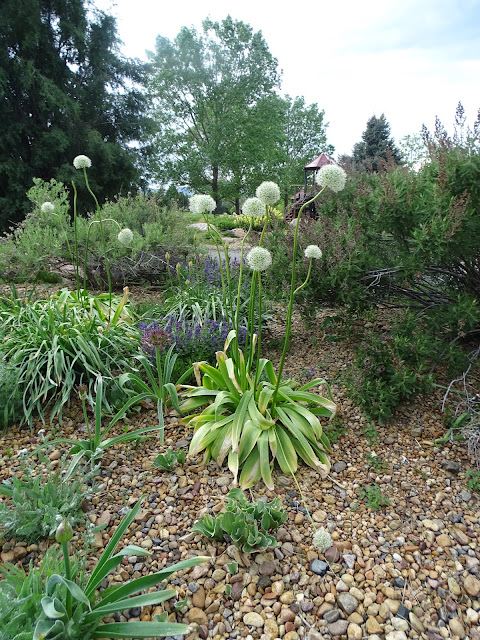 There are wonderful onions that behave and make quite a tall spectacle like this one... 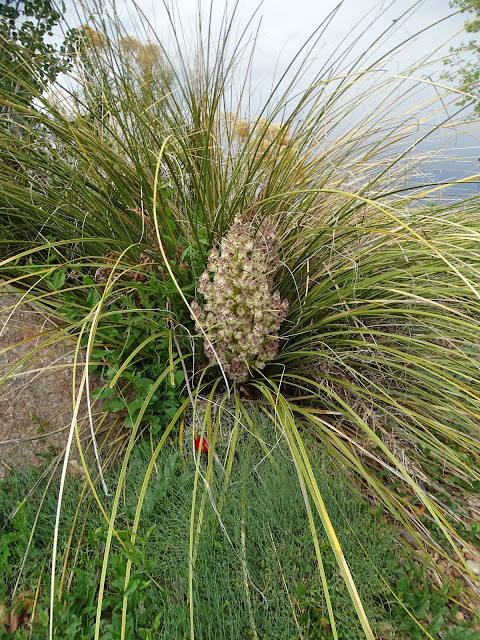 Nolina greenei puts out its alluring flowers among the leaves...


Enormous clumps of hedgehog cacti lurk around the corner... 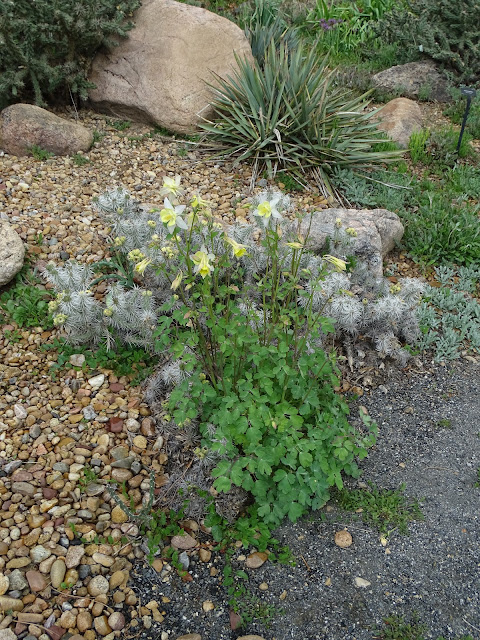 Columbines cavort with Cylidropuntia whipplei! How crazy is that? 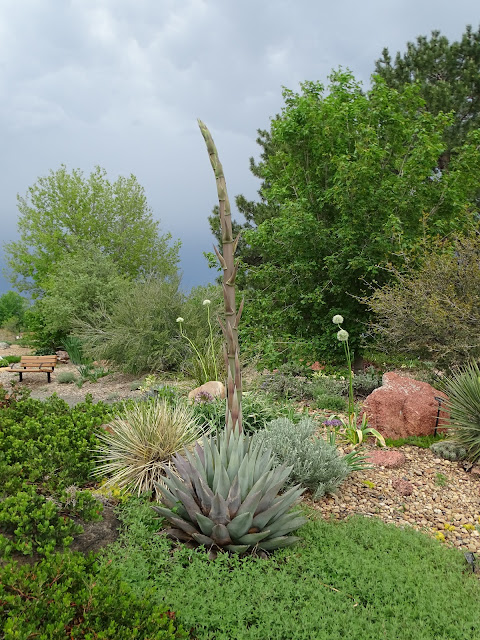 Agave neomexicana lengthens each day--this must have had snow on it last week! 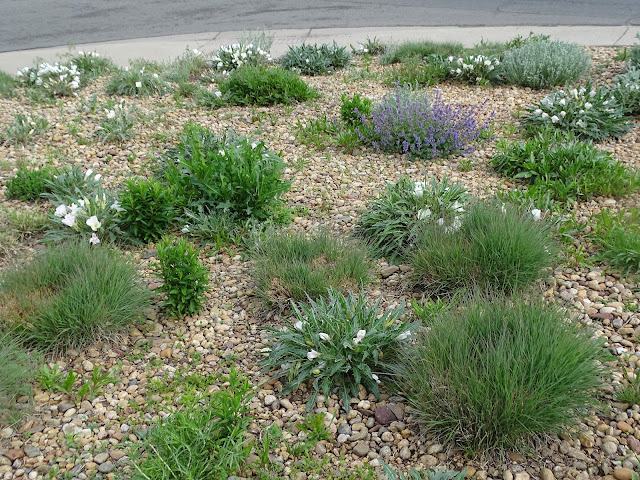 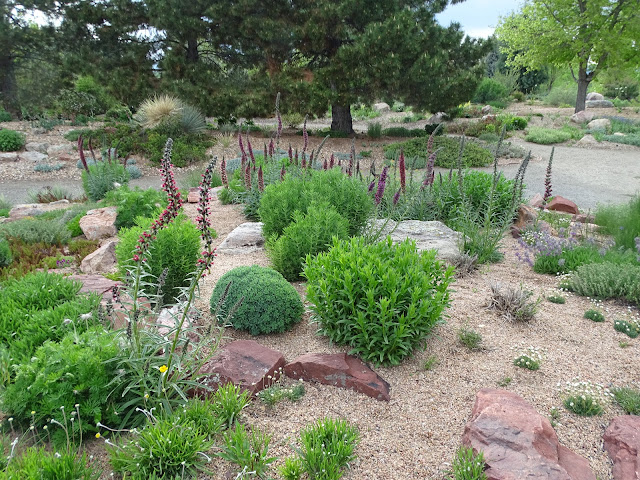 Echium russicum waves its russet candles in the wind... 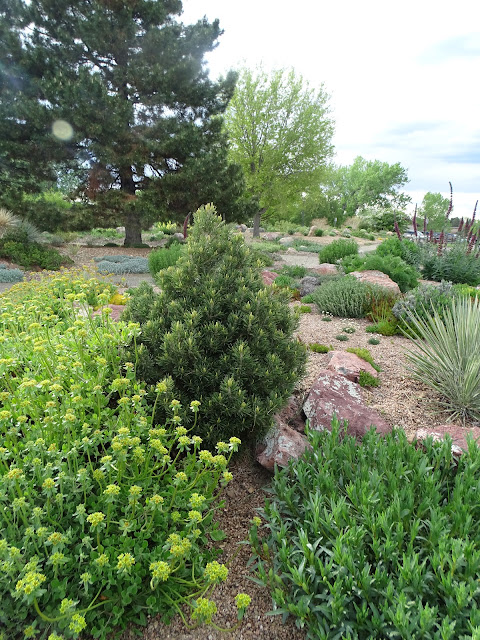 And choice dwarf conifers accompany our native buckwheats for a walk (a VERY slow walk, I grant you!)


Plants are stunning even in mere leaves! 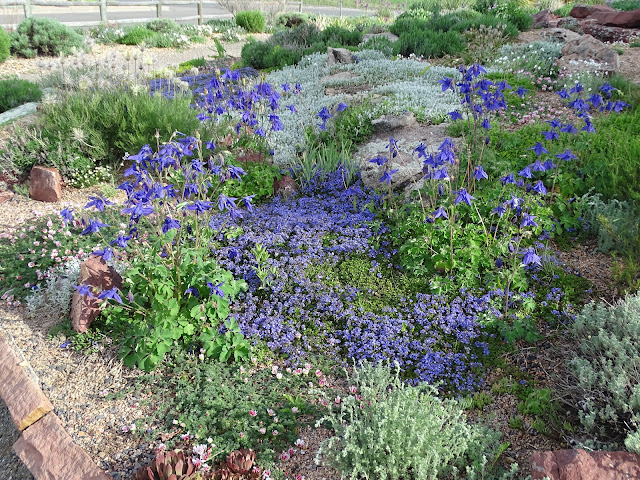 Aquilegia alpina is acting as if it's back in the Alps again!

And our native sugarbowl clematis looks even better than it does in the hills! 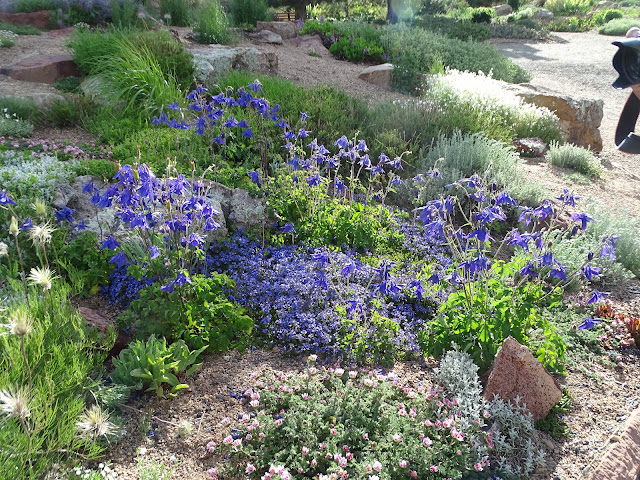 Did I mention that Aquilegia alpina looks stunning backlit, singing in chorus with Veronica liwanensis? 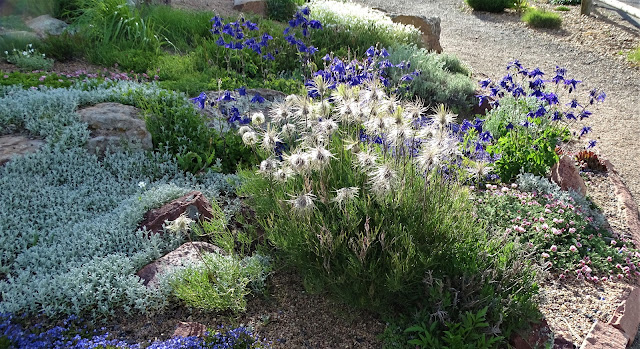 The only way to improve the scene is to add a backlit Clematis!


Truly we must be in Shangri-la! 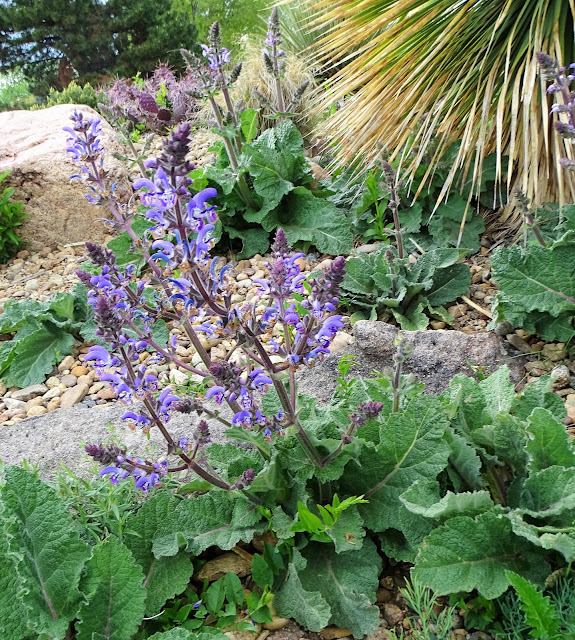 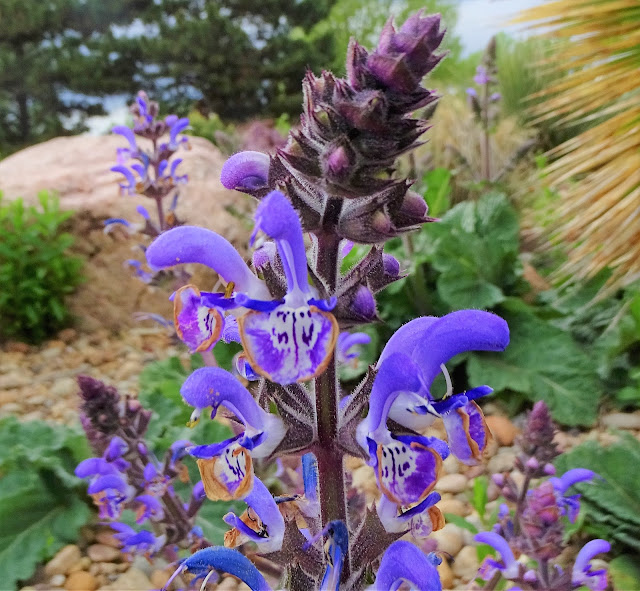 Extraordinary horticulturists from Seattle come to photograph and visit... 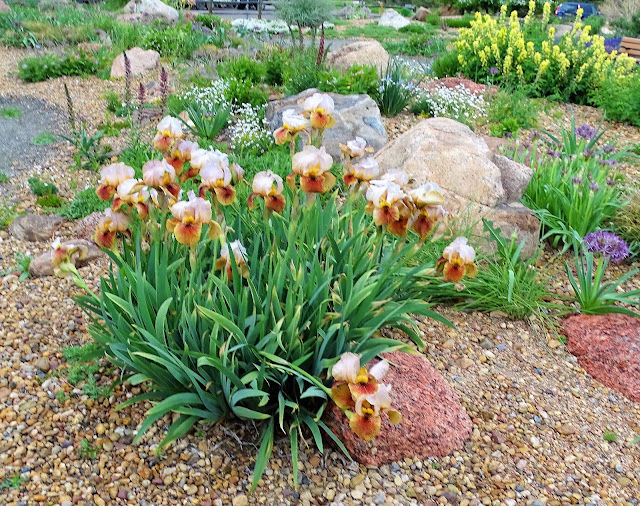 I wish I had the name of this wonderful Arilbred iris...but danger lurks if you look to the far right... 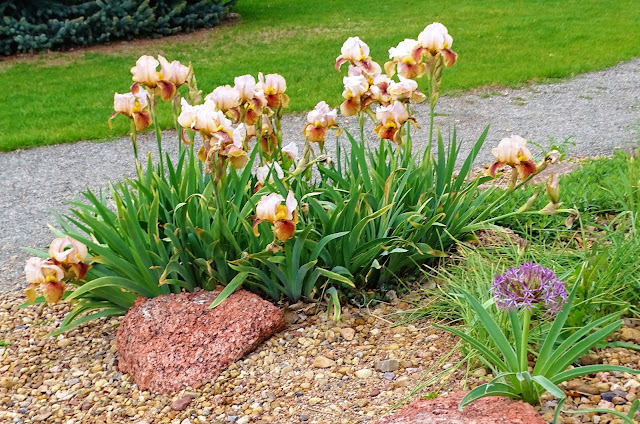 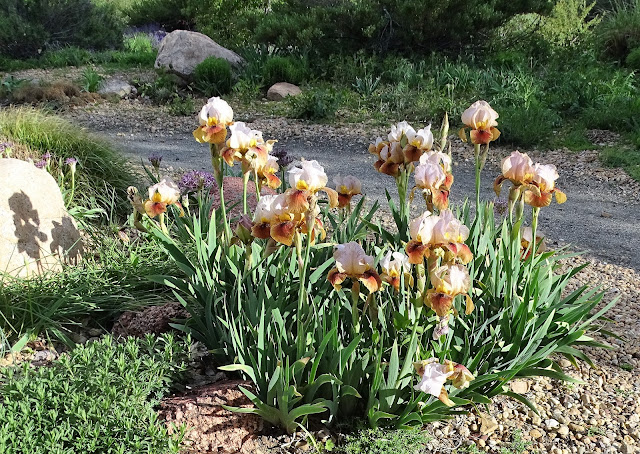 The iris backlit, but the Allium still sneaking in behind....

A winsome portrait of a seedling that must have self sown... 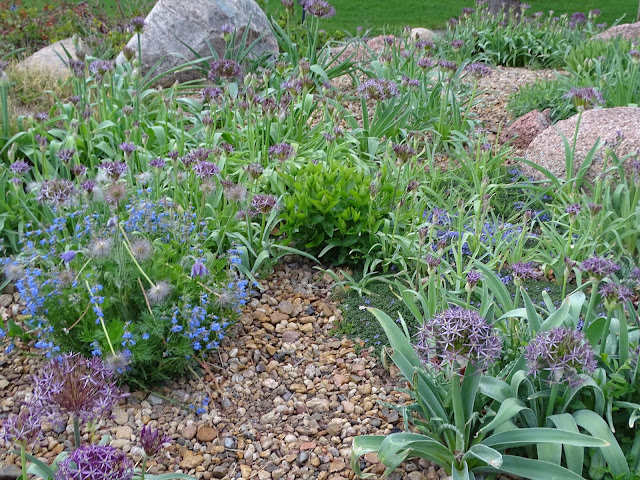 If you look carefully you will see another Clematis fremontii in the middle,already thronged and being pelted and tormented by the masses of Allium christophii that are threatening to inundate the whole place... 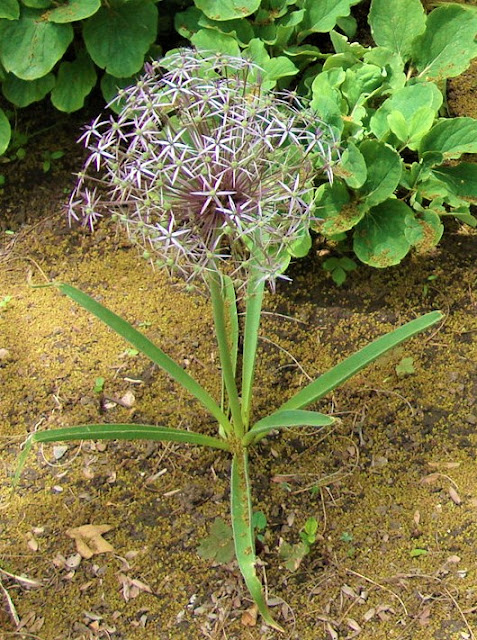 I recall when the first handful of plants of this spectacular Allium were planted: I feared even then that Kendrick may experience what we have at Denver Botanic Gardens: namely an astronomical increase in numbers of this bulb spreading EVERYWHERE from seed. 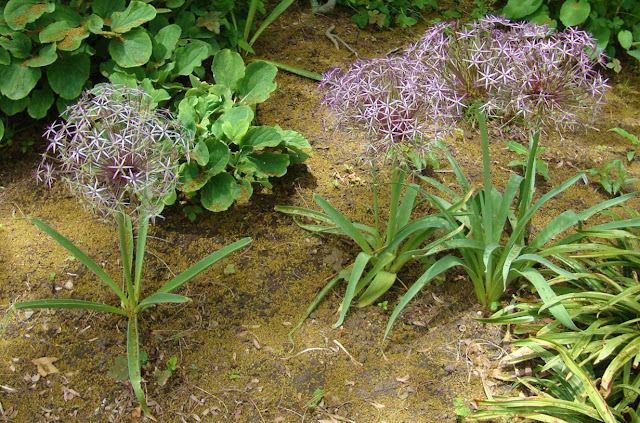 They looks so bold, so innocent at first (surely one of the most striking of plants ever)... 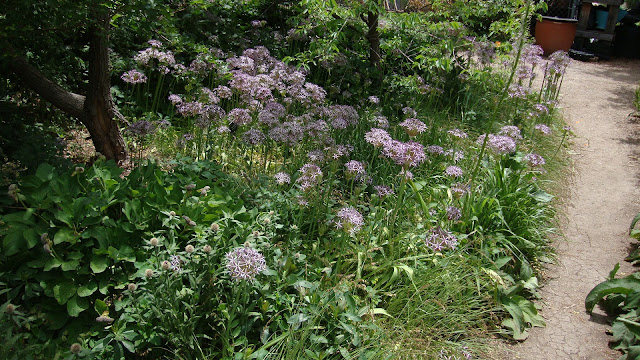 But sooon they spread... 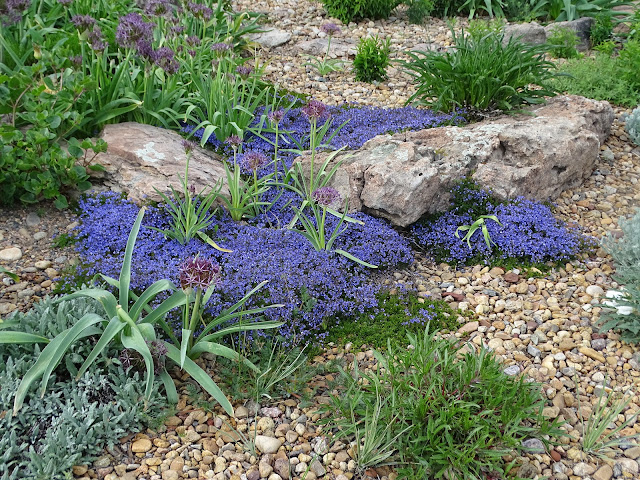 And seed far away... 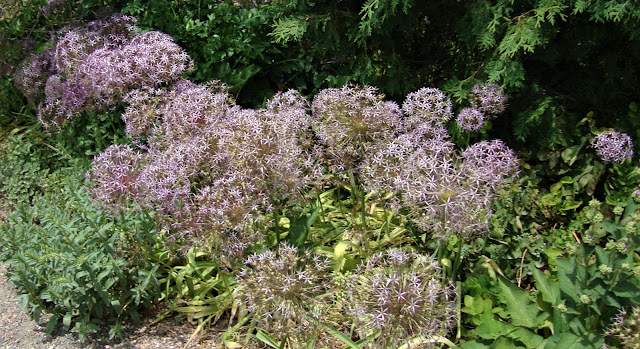 And soon the cover everything. 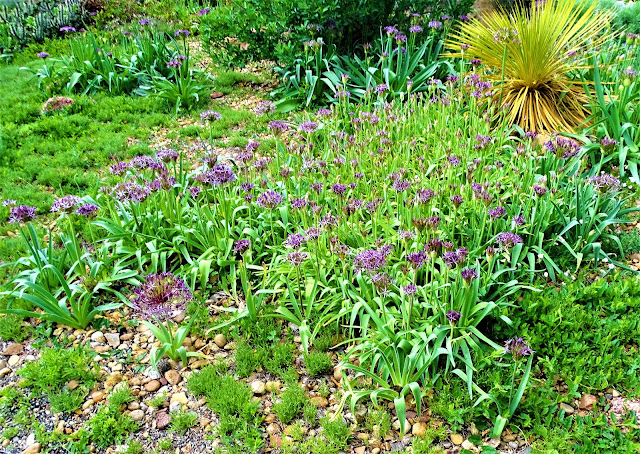 There were once choice plants under that blanket of Allium christophii... 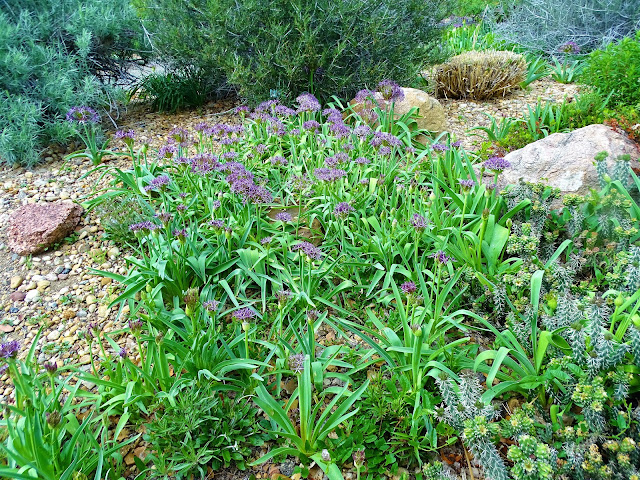 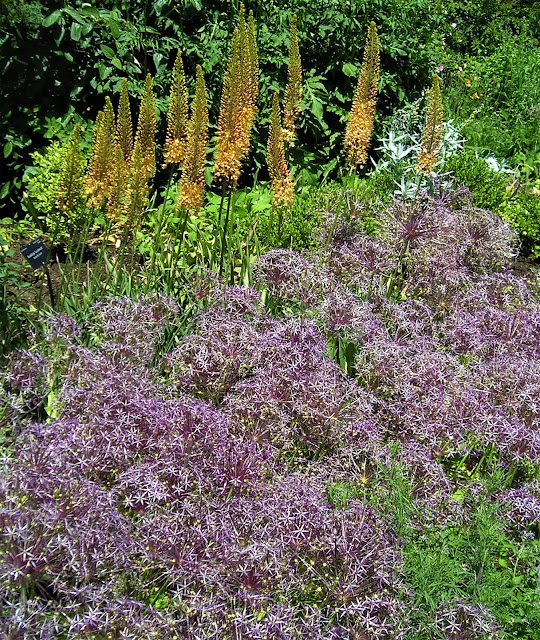 Soon all of Kendrick may become a solid mass of this Allium: perhaps their overworked Park Staff will go through and deadhead. Wouldn't it be better if the neighbors all came in and did so? they make superb flower arrangements. I wouldn't doubt that Florists would love to purchase these--I am sure each head would be worth a lot of money at the plant auction. Enough perhaps to pay for an intern to deadhead them! But that would be too sensible a solution, I suppose!

There are literally thousands of these scattered in vast battalions here and there across this--one of the finest horticultural achievements of our region: if they go to seed this year, I fear the entire garden will be swamped with them. And one of the greatest achievements of our horticultural scene will go the way of all flesh. And this blog will turn out to be not a celebration, but a requiem.

(P.S., all pictures above, (save a few of the Allium Christophii at the end--which were taken at DBG before we purged the gorgeous menace)--were taken at Kendrick Lake Park on Monday, May 27). Go see it before it's gone.
- May 28, 2019