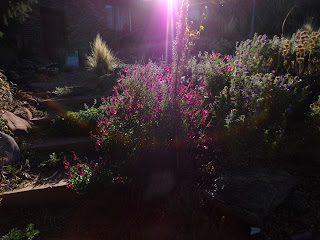 A highly impressionistic, shall we say, depiction of the "hard frost" that was supposed to occur last Saturday night. It did drop to 28F, and fried most Coleus in exposed spots, as well as Basil and Salvia fulgens. But, like Superman, the Southerwestern "Autumn" sages (S. greggii and S. microphylla and their kin) revealed their true, mountaineer souls by coming through pretty much unscathed. That's a seedling S. greggii above that decided it wanted to grow in my pathway: so be it! 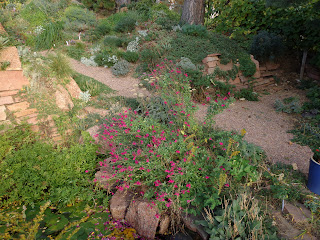 This is the real gem of the bunch: Salvia 'Raspberry Delight' represents a hybrid between Salvia microphylla ssp. wislezinii (a.k.a. Salvia lemmonii) and a greggii parent, produced by David Salman several decades ago: this has been far and away the toughest, most cold hardy and just plain wonderful of the autumn sages in my garden. I have it on my unwatered xeriscape where it must have several hundred thousand flowers right now, and this specimen that gets more shade near my rock garden--and still blooms prodigally for almost six months. 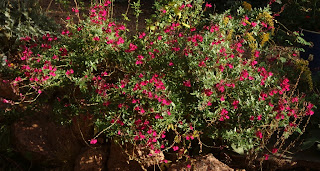 This "artsy" shot with backlight gives a bit of a flavor of its piercing purple-magenta flowers. Pictures (and I have taken dozens) can't seem to really pick up the right hue. It is wonderful! David tells me he has a plant that is even an improvement over this. I look forward to trying his new gem--but meanwhile, I treasure my 'Raspberry Delight': if the greggii/microphylla salvias are tenderish for you, try this one. I have a hunch it can even survive Zone 4 in a sufficiently dry spot....
- October 08, 2012