Funny how plants weave through our lives. I've had a life long obsession for iris, for instance: I can't begin to imagine how many species and hybrids of iris I've grown in my day--but it must be near four figures I imagine by now. I've had a pretty lifelong love of columbines (required of all Colorado citizens of course, by law), and I've had pretty steady life long passion for a dozen or more genera including the alpine classics (Primula, Gentiana, Androsace, Saxifrage: you name it). All of these plants accrue a sort of semantic load with time.  Meconopsis are a stretch for us in lower parts of Colorado--but having gloried among a dozen or more species in 2018 and 2019, I may be getting a bug for yet another genus of Papaveraceae! The cluster you see above had special meaning for me, as you'll see in the end....

When I published my last post "In Praise of Poppies" I now realize I must have been somehow subconsciously summoning more than just their "evanescent" charm--the aesthetic bliss of the flamboyant colors, and the Universal appeal of their bobbing heads in the wind. Somehow in a long life that I've been blessed with, other elements factor in. Several times in my life I've visited Great Britain in November, and seen the crepe poppies pinned on everyone's chest (it seemed)--and marveled at the manifest desire of Britons to remind themselves of the horrors of war. I "borrowed" the images above from the internet--there are innumerable avatars like these you can Google as well as me. I was especially touched by this image which you can see yourself if you click this link (which I do to honor their copywrite) 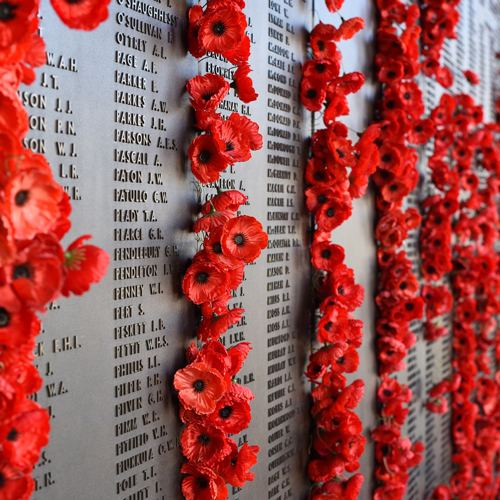 I have been blessed in so many ways, I ought to be a much better person really: I grew up in Boulder, Colorado (surely one of the loveliest towns in the world) and we had uncommonly good schools I've come to realize: my first grade teacher's name was Mrs. Hart and my second grade teacher's name was Mrs. Love--which pretty much sums up my relationship to Education.. But the best teacher I ever had by far was Mr. Dean--his teaching and personal skills were off the charts. He taught 8th grade Geology (and I may have been one of his best students, judging by comments he put on a notebook I submitted to him, which I still have and treasure). I shall devote more blogs about him: needless to say, after his class I was definitely going to be a Geologist, if I hadn't taken it again in High School (which covered a fraction of what I'd learned in the 8th Grade) and my college class was a total downer. Nevertheless, I still retain a clear understanding of terms like batholith, pyroclastic, subduction, gabbro and vesicles thanks to Mr. Dean.

Mr. Dean rarely digressed--but on one occasion, he confessed he loved poetry and recited this poem: please read it with deep feeling and full comprehension to get the full gist of our experience that Monday, November 11, 1963:

By John McCrae
In Flanders fields the poppies blow
Between the crosses, row on row,
That mark our place; and in the sky
The larks, still bravely singing, fly
Scarce heard amid the guns below.
We are the Dead. Short days ago
We lived, felt dawn, saw sunset glow,
Loved and were loved, and now we lie,
In Flanders fields.
Take up our quarrel with the foe:
To you from failing hands we throw
The torch; be yours to hold it high.
If ye break faith with us who die
We shall not sleep, though poppies grow
In Flanders fields.

Not, perhaps, the most famous English poet--and the poem isn't exactly Keatsian in diction--but the sentiment so deep, the rhythm sufficiently stirring that it became inextricably entwined with the many facets of the poppy phenomenon as it plays out to this day--as an emblem of the Royal British Legion and beyond that an emblem of remembrance of those lost in World War I, expanding to become a symbol of the profound tragedy of war.

Mr. Dean read the poem with such feeling that all 25 or 30 of us got it big time. He was the sort of teacher who didn't have to expostulate--he inspired. 11 days later when John F. Kennedy was assassinated, I suspect the ripples emanating from that poem may well have added yet another layer of meaning to poppies in our subconscious.

And so it is with floral emblems of all sorts: our beloved Colorado Columbine has accrued profound layers of connotation for many commemorating much as the poppy has a tragedy--in our case the very first of an unspeakable series of school shootings. Four people very dear to me were at Columbine on April 20, 1999. It reverberates personally for them and for all of us in Colorado as profoundly as the Armistice/Veteran's day remembrances.

Returning to Tibet and Meconopsis, I now show the whole picture I cropped for the header on this post: the prayer flags distract a tad from the poppies, I fear. Although I'm baptised (and lapsed) in the Greek Orthodox religion (whose liturgy, architecture and iconic art remain near and dear to me) the only organized religions that have called to me have been Buddhism, Confucianism and Taosim (which may explain why I spent 8 years studying Chinese perhaps), but I was shocked and repelled by the extent to which every pass we crossed in Yunnan and Tibet was festooned for acres with religious bunting. Having grown up in Boulder, barely a few hundred feet from a Naropa hostel, I have had a lifetime's exposure to Tibetan Buddhism--and I have several dear friends who are devout followers. My Buddhist tendencies--such as they are--are not so much religious as philosophical. I am absolutely 100% positive that not Siddhattha Gotama nor Siddhārtha Gautama nor Buddha Shakyamuni would approve of what felt to me like a desecration of the heights.

And I am equally positive that the Founding Fathers (and unquestionably every one of the Founding mothers) would have found the felons responsible for the desecration of the Capitol building this past Wednesday to be the opposite of "patriots". I hope they and the politicians who have fomented their stupidity with lies will suffer the consequences they deserve to the fullest extent of the law. Especially our putative and contemptible "president"...

It is time for "patriots" to cease desecrating our country. And for demagogues to resign. And for us all to cease desecrating what's left of nature--even and especially in the name of "religion". And we must honor the memories of those who rest beneath the poppies, columbines. Above all, we must dismantle the war machine that has had far too long a tenure in America and the world.

Poppies are nothing if not apropos....