Kew Part two (we finally get to the heart of it!)

We're now getting closer to my favorite part of Kew (the alpines!) but on the way we have to stop and admire Acer griseum, whose grizzled red bark is trying hard to match the hue of Mike Bone's beard. 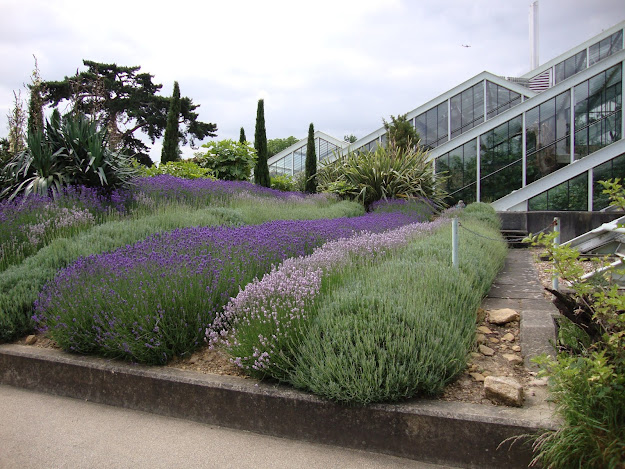 Passing by the Princess of Wales' conservatory again, I had to stop and admire the lavender planting--contrasting the various species and cultivars.

The label says it's K. porphyrantha: and I suppose I've seen enough variability in the species both in the wild and in my garden I will believe it.  This is certainly different from the compact alpine growing by the acre around Witzieshoek, well less than a foot tall and pure yellow

Larg areas had been re-worked, so there were some rather stark vistas--but most of it was in tip-top form.

As I get closer I see the red spires are a Colorado native! Fun to get a whiff of home in London! 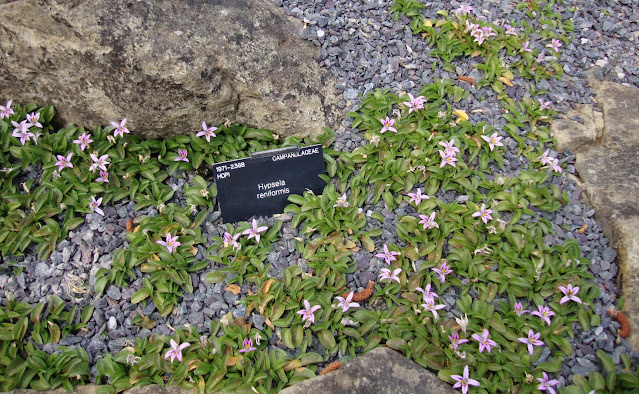 So many plants I've tried and lost! A visit to Kew's classic rock garde always brings home a long list of "must grow this again!"...


Somewhere, probably as a transparency that I haven't scanned, I have a picture I took twenty years ago of this in the wild. I was with John Watson, who named this originally and I photographed it with John's "naiad" wife, Anita sitting next to it. In a perfect world I'd follow this picture with that image. Perhaps if Biden defeats Beelzebub I can make amends and scan and add that image to follow.


I was startled to see hardy bromeliads in the South American section. This one from Chile. I recall seeing a number of Puyas blooming nearby on my last visit as well...


I love the siting of this plant. Would love to be able to grow a dwarf Alstroemeria like this (it has to be possible in my climate). 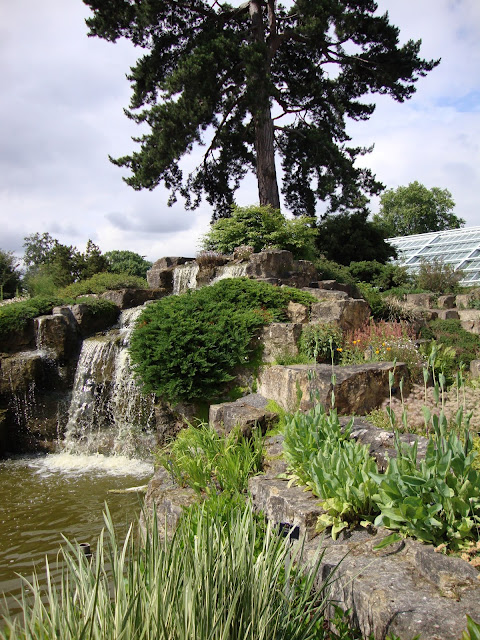 The blocky limestone and water features in this garden are iconic: I have so loved to visit and revisit over the decades... 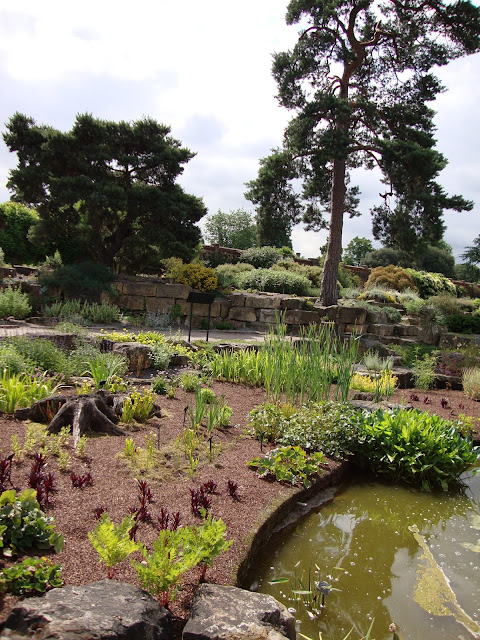 
I'm so ancient that I first visited RBG Kew in 1981, the same week they dedicated the FIRST glorious Alpine House (I'll never forget the youthful Tony Hall scurrying around that perfect little gem way back then--a fraction of the size of this amazing structure. And Tony is now happily retired (and living across the street from Kew!). I know I'm not the only one who regards the Kew alpine house as the pearl in that monumental oyster of a garden. 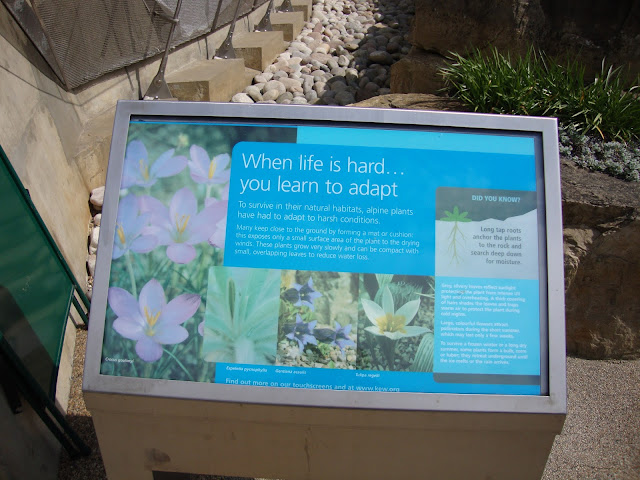 
I'm amazed this is successfully growing in open soil: I wonder if it persists. We find it hardy only in crevices of a wall or a crevice garden.

An extremely attractive form of this: I wonder if it's in commerce? I'd love to grow it.

I grew this for years from Archibald seed. What a spectacular stand! Grew is the operative word...


I grew this as well: the difference is that Kew probably still grows it. You can't beat Kew.


This makes me chuckle: this Euphorbia is technically "banned" in Denver:  It has naturalized in a few spots (probably escapes from gardens) and there's a fairly virulent campaign to eliminate it in gardens and the wild. If you look closely, you'll see a few seedlings popping up around the plants here as well...there's a hoary specimen even in the alpine house!


The label says it's from Crete (as are my ancestors).


We've found this to be the most drought tolerant Sedum--and it's even championed by Denver Botanic Gardens plant marketing program, Plant Select.


I neglected to photograph the label, so this is my guess....


Much more exuberant than the plants I've seen in the eastern Mediterranean.


I am distressed I didn't photograph the label for this: I'm currently on a bit of a quest for wild delphiniums. 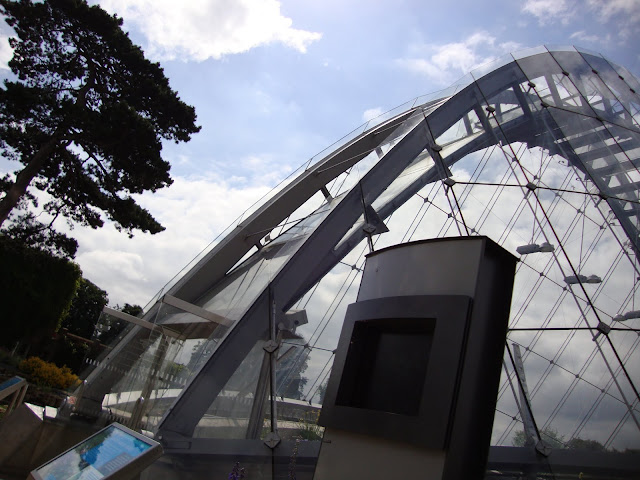 I love the sleek arching lines of the  Alpine house, which created quite a stir when it was launched. (Figuratively, not literally) 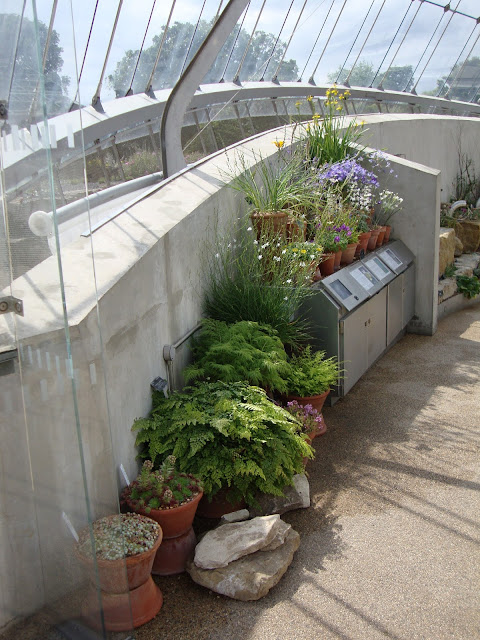 All the times I've visited both the old (small) alpine house and this one, I'm amazed by the enormous variety of plants and their artful display. Most are unique and rare. But even the commoner things have something to say.


I have a bit of a schtick about thymes: I'd like to grow all of them. This one was new to me. 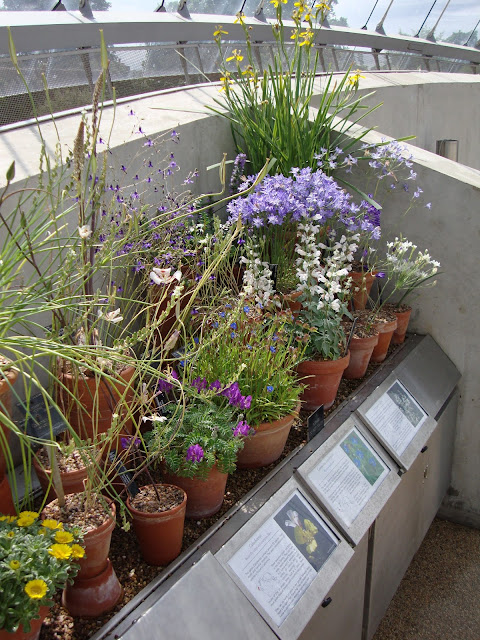 
What a splendiferous display! 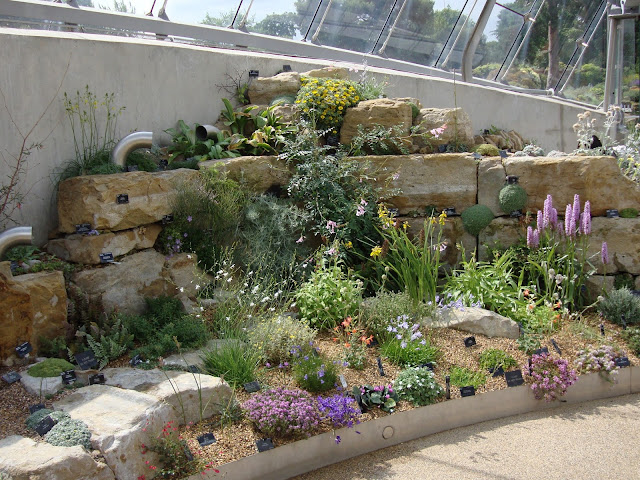 Do you have any idea what it takes to grow so many gems, and display them with such perfection?


One of the feathers in my cap is having helped distribute this widely in commerce in America. Originally collected in the northern Caucasus by my good friend Henrik Zetterlund of the incomparable Gothenburg botanical garden.


One of our finest dryland ferns...


So annoying to see these in every British garden where they can almost be pests.


A new one for me: I grow its American cousin (which is even native in Colorado!)


I'm guessing on the name.


I zoomed in: it is probably the same clone as ours, but ours grows flat as a pancake.


Also guessing on this name...


As I look at the source and year, this could well have been my own seed collection.

Lalbel missing: I'm guessing on the name: it could be O. dictamnus again.

It warms to cockles of my heart to compare this to the fat mats smothered with flowers at Chatfield: for once we trumped beat Kew!


A stunning Chilean bulb that is new to me.


I'm quite sure I saw this on Ganghoba  (Yunnan) last year in the wild. I love seeing plants in the wild that I've grown and vice versa. 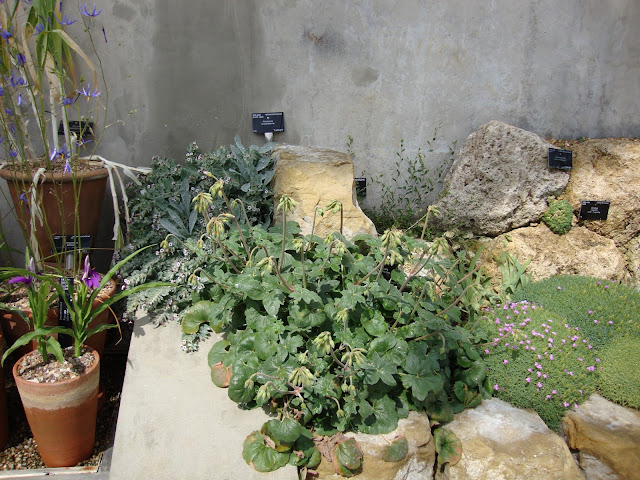 I wonder if that's Pelargonium endlicherianum or perhaps a hybrid with quercetorum?


Another plant new to me: possibly a good one for us to try (a xeric Primulaceae!)


What a tale this picture tells: it was still labeled Dictyolimon macrorhabdos--as it was when I first grew it. We then changed the name to Aeoniopsis cabulica--due to the key in Flora Iranica. Someone insisted it's now Bukiniczia cabulica, so we all bleat and follow suit. First collected in the early 80's by Henrik (again) in Pakistan, Dan Johnson and I recollected it in 2001 between the Deosai plateau and Skardu. I'm pretty sure all plants in cultivation trace to Henrik's, however (via seed we shared widely in the 80's) 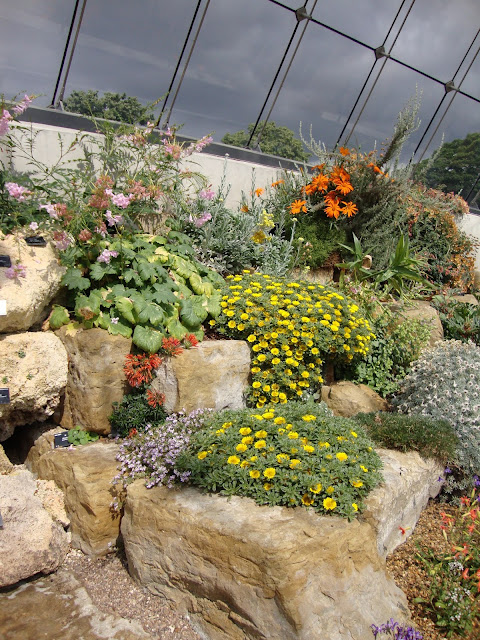 
I have me doots about the I.D. on this: it looks as though it could be a hybrid with Aloinopsis, certainly not pure N.vittatus (don't we love to try and find little solecisms like this on labels?) 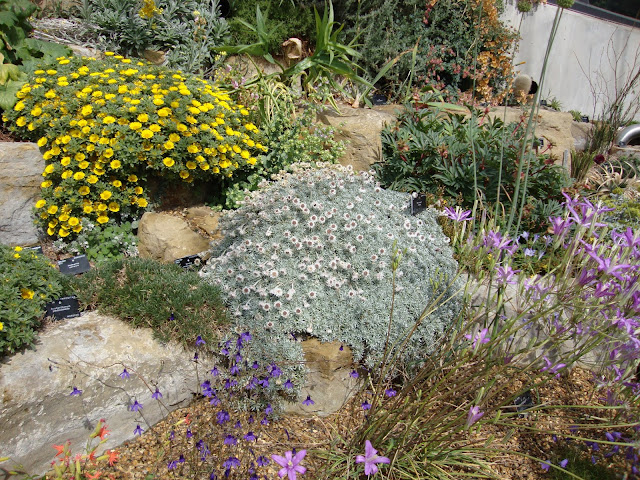 A Helichrysum I whose label I failed to photograph: I believe it's Ethiopian.


What a fine combo!


I'm quite confident this traces to my 1994 trip to Hantamsberg where I collected a Hermannia like this I labeled  "cf. stricta" which it is not.


Just where in Egypt does this grow, I wonder?


A milkvetchI would love to grow.


Another stunning Thyme. For a good thyme go to Kew! We seem to have wandered out of the Alpine house again...


Somewhat annoyed to see this: this thrives for us and I didn't think it would grow so well in a Maritime climate. Wrong again. Peter Davis' magnificent collection which my friend Homer Hill dubbed 'Partridge Feather'--which seems to have stuck.


To die for mounds of a shrubby pea. I fear they would die if I tried it. But we grow the Berkheya purpurea you see beyond quite well as well.


A perfect specimen of this classic Atlas native. 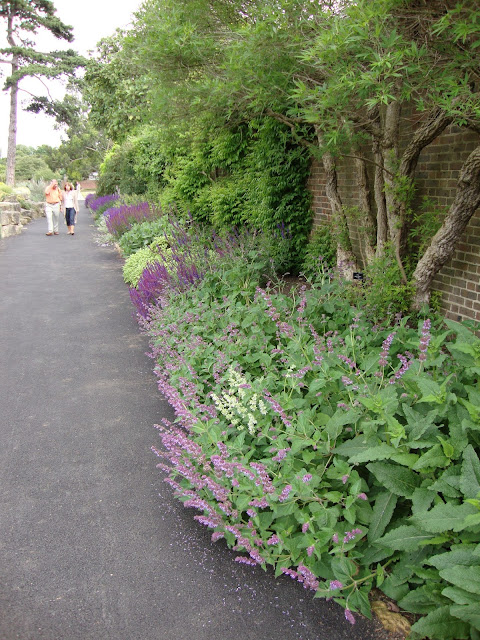 There's a large border dedicated to Salvia, which I lingered over: a fantastic collection incidentally.


One measley example from thence: such a wealth of salvia in China! I saw a dozen species or more the last two years, none of which are in cultivation in America.


Don Juan must have grown this. Similar (though not as white) to the commonly grown C. gymnocarpa, which is also from Italy.


I must have missed this as we drove from Mt. Ida to Istanbul by Troy!


So much more upright than my plants: perhaps these are juvenile?


The pussytoes are not remarkable, but the Ajuga made me chuckle: one of my worst garden weeds (which I admit I rather enjoy). Weediness is a relative phenomenon, obviously! 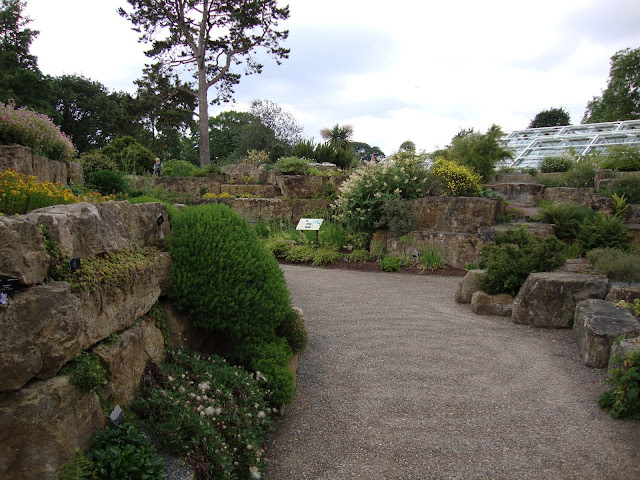 I took far more vistas like this at Kew on my first visit in 1981--all unscanned transparencies. I must scan them one day!


A perfectly sited specimen of this fantastic bellflower.


A rather unconventional planting of a shrub in a crevice.  I neglected to photograph the label, sorry! 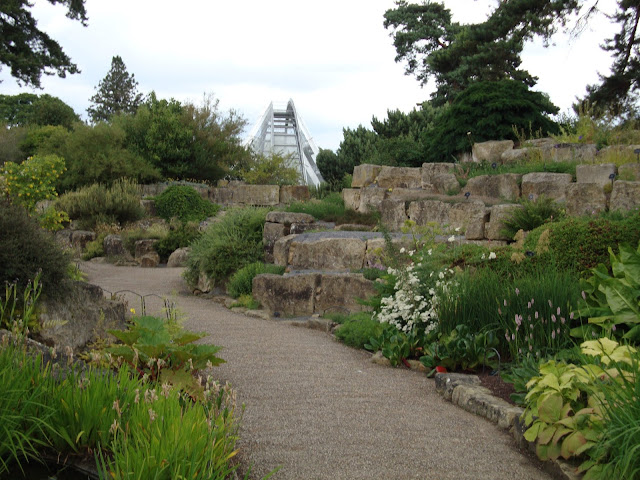 Another antipodean Arthropodium that's tender for us!


Celmisias are reputed to prefer the cool north of Britain--but this is obviously happy here. 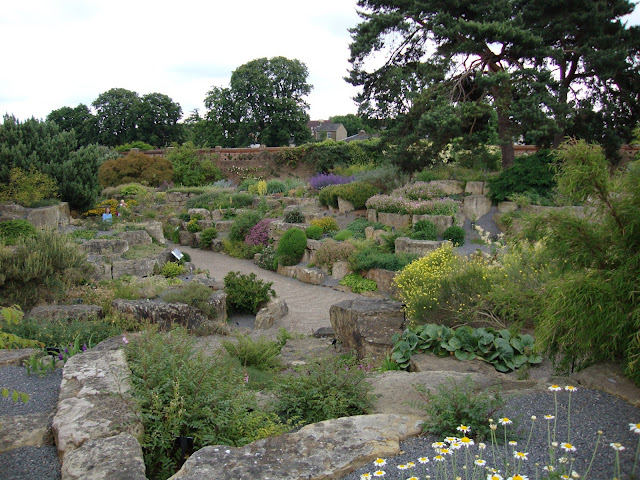 A parting view (for this Blog post at least) of the fantastic rock garden. Oh to visit again soon!


I end on one of the most ubiquitous industrial plants that grows in medians and everywhere around Denver--though never so diminutive: wish I'd photographed the label..

I still have pictures of scads of plants from the rock garden at Kew, and other parts of the garden--for at least three more blog posts of pictures from just this one visit...

And my slide library is full of hundreds more transparencies from other visits thence I've never scanned (of course) and let's not even talk about the dozens of other botanic gardens across Europe and America I've never bothered to post. The world is such a treasure trove of plants: let's hope one day we can fly and drive around a bit more freely (although probably never as we once did)--and let's hope that we as humans can learn to curtail our destructive urges which are still destroying so much in nature and human culture...

I guess I'll leave it at that before I become even MORE political!