The zinna (which may have caught your eye) is not the neglected gem (albeit not as popular as it ought to be): the strange frothy white thing behind it, however, could have a case made for it being one of the least appreciated native shrubs of Colorado. Frankenia represents a far-flung monotypic genus in the family Frankeniaceae that are almost all coastal plants from subtropical and tropical regions. Although Frankenia jamesii is found (less conspicuously) in a few states around Colorado, it is best known in the dry Arkansas valley around Pueblo where it is abundant and likely where it was undoubtedly walked upon 200 years ago by its namesake, Edwin James. 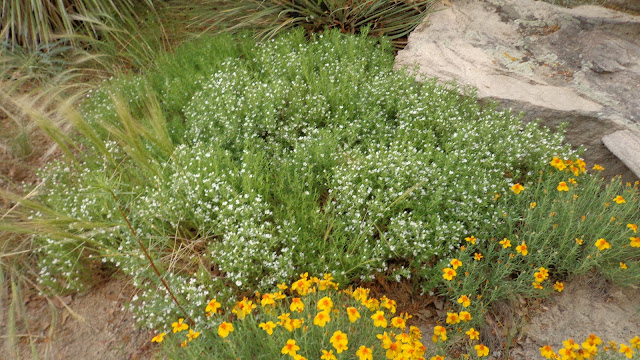 The first two frames show Frankenia jamesii in full bloom at the South end of Dryland Mesa where it has grown for decades: it makes a low, twiggy mound that is compact and beautiful through the year, spangled with white five petaled flowers in early summer. 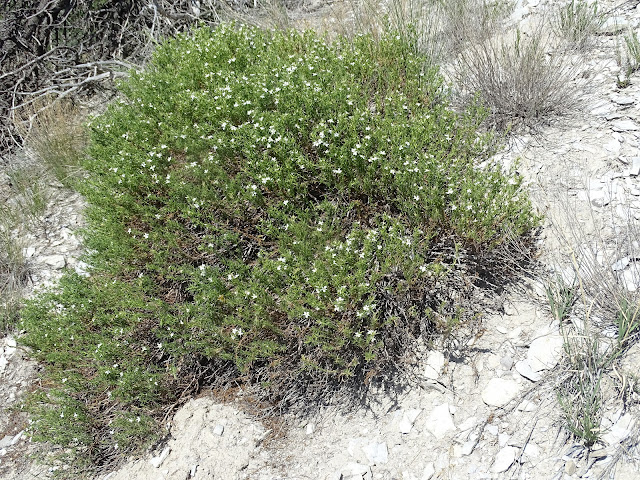 Here it is growing on a calcareous shale not far from Penrose (and likely not far from where James might have seen it too!) 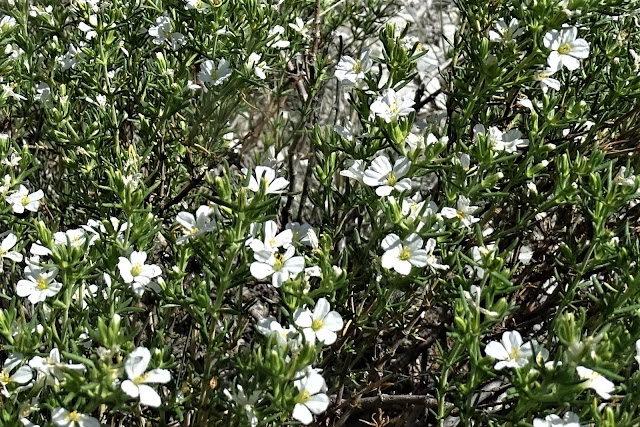 A closeup of the starry flowers: which I grant you are modest. I have grown a Mediterranean species of Frankenia which was prostrate with similar, more pinkish flowers. And researching the genus, it appears most are in the pink to white range, with twiggy growth and heathery leaves. Most grow at lower altitudes and latitudes, often near the sea: I can almost visualize how our endemic evolved to adapt to colder, more continental conditions as it was lifted from sea level by the Laramide orogeny (but I may have a too active imagination). The same phenomenon probably happened with its Eurasian cousins that are stranded in Central Asia, like F. persica. I have a hunch that the ranges of the North Temperate species pretty well outline the shorelines of the ancient sea of Tethys. Not sure what to make of the Southern hemisphere species--perhaps they represent the Gondwanaland shore of Tethys? 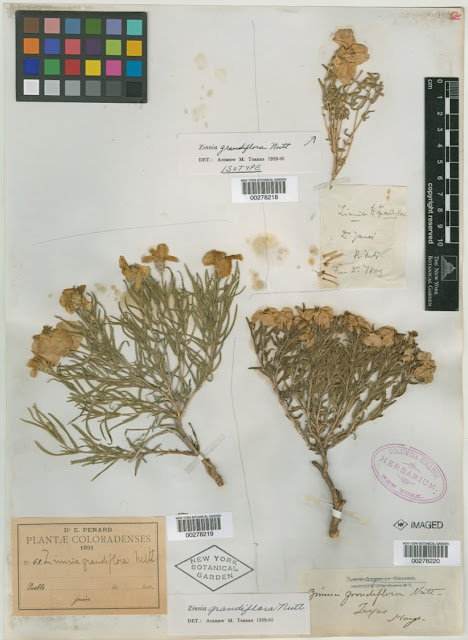 I assumed that since the Frankenia was named for James it must have been named from his collection. I have not found a specimen in the images of plants from the Long expedition housed at New York Botanical Garden: I have not yet solved the mystery of its naming, but above you can see the type of Zinnia grandiflora, which was named by Thomas Nuttall, one of my all time heroes, just a few years after his transcontinental walk across America: he discovered so many Asteraceae that he published a paper on new species in the family (mostly his own collections) including a few other species like this one that John Torrey had been sitting upon for nearly two decades: here's Nuttall's paragraphs about our Zinnia in his monograph in that Philadelphia Academy proceedings: 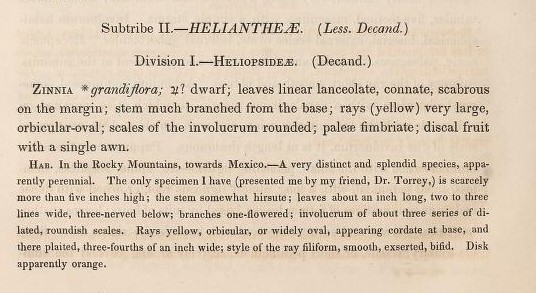 As usual, Nuttall hits the nail on the head "very distinct and splendid species" is a great way of describing our champion Zinnia.

I had such good intentions a few years ago: I fantasized about following Major Long's expedition on foot, and blogging about every day they lingered in Colorado. As it is, I've managed three measly blog postings in the fatidic 200 year anniversary period of when they were here...oh well...

But so many fantastic plants were found (and ultimately named) on this expedition...and we are so fortunate that the actual specimens they collected (and often handwritten notes by "Dr. James"),

I shall end with just this one, the type specimen of Penstemon ambiguus, which must be one of our most "distinct and splendid species" of that genus! 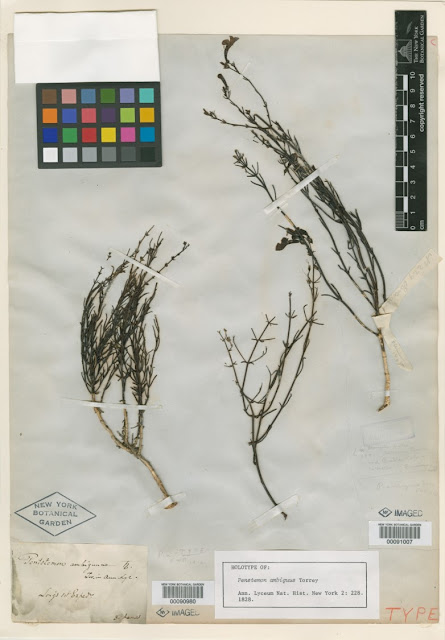 The plants are certainly gems of the Long expedition, but the real overlooked gem is Edwin James--scientist, doctor, conservationist (in the 1820's!), champion of naive American rights, his farm in Iowa was a major station on the Underground railroad. He wrote two seminal classics of American literature (the Account of the Long Expedition and the Narrative of John Tanner).  I believe his place in American intellectual history has not been properly assessed or assigned--he is pretty much the epitome of all I admire the most in our national character.
- July 24, 2020