I am two days late, alas: Edwin James and his associates actually climbed James Peak Pikes Peak on July 14, 1820: so I've missed the fatidic anniversary of the discovery of this, one of the most spectacular endemic plants of Colorado.

What extraordinary times we live in! This specimen that traveled for months on pack animals through rain and all manner of vicissitudes, and has spent the better part of two centuries, first at Columbia University and now New York Botanical gardens, where it was scanned for us to enjoy!

I could go on and on...but how much better it is to see the glory of Pikes Peak tundra through the eyes of the first scientist to climb above tree line in Colorado: 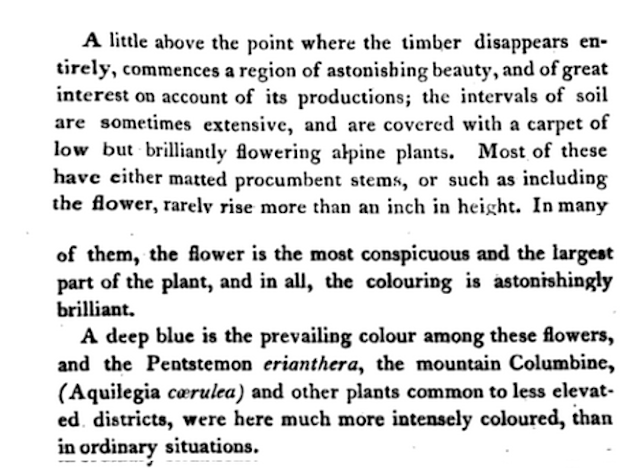 This above is the entry describing the first glimpse above tree line on Pikes Peak. I think it is perhaps the most beautiful prose poem ever composed about the Rocky Mountains. James wasn't given to fits of excessive emotion--the repetition of "astonish" twice in such a short space is telling.

In a world where we are so often ruled by the hum drum, it's good to welcome astonishment such as this.

Also growing on Pikes Peak, and one of many plants collected by James, the Colorado alpine columbine was not named from this, the first specimen ever collected, but only named decades later by another collector. John Torrey was manifestly overwhelmed by so many novelties, quite a few, like this, were overlooked.