Grasses with class (and a secret weapon as well!)

I have sung the praises of this grass in a few other blogs: I am amazed any plant so dazzling for such a long time is still not Universally grown: I drive hundreds of linear miles through Denver every week and have only seen this once on my drives--in Mike Kintgen's garden. If I were Trump, or perhaps an even more clever tyrant I'd order 2/3 of the Karl Foerster Calamagrostis in Denver to be replaced by this. Silly thought that: the Donald would never do anything so clever and tasteful!

Here is a clump by itself at Chatfield Farms near the Schoolhouse. Lauren Springer Ogden and her husband Scott found and introduced this form from fields near Dallas, Texas, I believe. Not only are they brilliant writers, designers, gardeners but plant explorers to boot! I never cease to be amazed at how plants from central and even Southern Texas have proved so hardy. I just got a Facebook Message from Jamie Ellison (a great plantsman who lives in Nova Scotia): this is thriving for him up THERE! He promised me a picture which I'll post here when I get it to prove it! 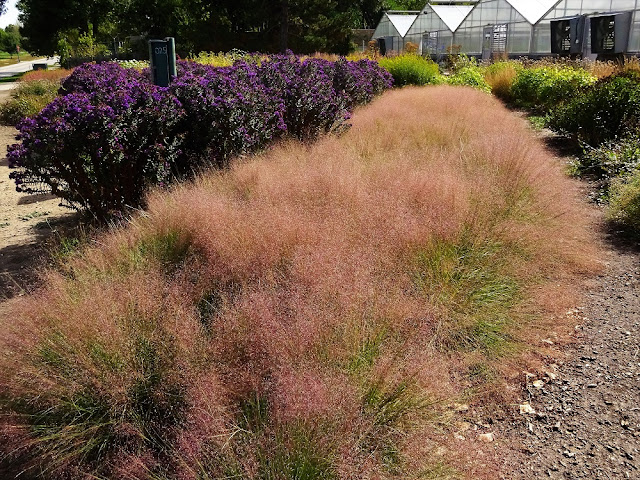 And here's a mass planting at the City of Denver greenhouses....


As long as we're discussing spectacular grasses that no one is growing, how about THIS hummer!  Yet another fantastic grass first promoted by Lauren and shared with David Salman (when these two are behind a plant, better scamper and get it). High Country has sold it for a decade or more, but it hasn't caught on. Plant Select will promote it next year--so finally the mule-headed designers and landscapers MIGHT catch on eventually and replace a few of their goddamn Karl Foersters with these superior plants: why superior?

1) they look good far longer in the summer--Karl looks autumnal by July: How stupid is that?
2) they hold up well in late summer and fall when Karl begins to fall apart and is invariably cut to the nubbins by stupid landscapers and ignorant folk in general. Did I mention that I hate that?
3) both of these grasses are MUCH more drought tolerant than the aforementioned stupid Karl Foerster. The secret weapon I alluded to in the title: we live on a frickin' steppe--with average rainfall of 12-15". To plant water demanding plants is really an act of supreme stupidity--which of course characterizes almost 98% of Horticulture in the Rockies. And our moronic electorate that won't vote. But I digress... Come to think of it, I visited Victoria, British Columbia in September and Paul Spriggs and Erik Fleischer (two designers of extraordinary talent I spent time with there) were both fuming as much as me about THEIR stupid landscapes with brown weedy turf and stressed out rhodies and hydrangeas on life support. Landscaping in North America is in almost in as dire a state as our stupid Executive, Legislative and now Judiciary that are polluted with the lowest forms of human cupidiuty, turpitude and malfeasance*--but I digress....


Not only do I digress, I recant! A significant number of the aforementioned designers and landscapers are beginning to use Giant Sacaton more and more: I'm seeing this all over Denver. Just think of it: they're planting a Southwestern Native (which grows within spitting distance of Colorado in 4 corners!), that thrives on neglect and can take the worst droughts, which looks awesome year around and doesn't seem to seed around. Which lives forever and looks stunning in the backlight. Which is subtle and combines so well with neighbors! Who'd a thunk? Of course, this is a testament to Plant Select--a program I helped create and applaud (and is having a new gust of energy with Ross Shrigley at the helm).

So perhaps there's some hope after all! Just be sure to get your grass in gear (and vote this November).

*I can use big words like that because the racist pseudo-religious right can only read monosyllables with their lips moving the while, and don't know how to look them up anyway...

P.S. If you're offended by my partisan point of view please stick a Karl Foerster in your ear.

Attention: in the interest of fair play and transparency, I must append my comments above with a communication from Lauren Springer Ogden. This is an extract from an email we exchanged after I'd published this Blog:  I regret that the nearly 1000 blog viewers who have seen this post thus far won't get "the other side" from the Goddess herself, but here's the quotation from Lauren:

"I do love Karl Foerster grass (though haven’t grown it in 16 years, prefer Overdam) and actually it is not a water pig in my experience, no more so than any of the three grasses you discuss. Giant sacaton does best with some irrigation, it’s an arroyo plant. Ruby muhly grows on hardpans that can be standing in water or baked dry periodically as the season progresses in places that get 30-35” rain per year albeit a lot more heat. Alpine plume grass grows on seasonally moist mountain meadows in the southern Alps with similar rainfall. Truly xeric bunchgrasses are indian rice, needle and thread, three-awn, and blue grama and even the latter has failed to green up around Santa Fe for several of the last ten years. I have a cool-ass hardy blue-ish big muhly i collected in NE NM about a decade ago that may be a winner and xeric, am watching it closely now that it has started to flourish since it has found a happier home in my new place’s silty, cobbly soil, it just sat at my former garden in clay." (Lauren Springer Ogden, October 11, 2018)