Orchids were a recurring leitmotif throughout our visit to the Caucasus: this lively colony of the monkey orchid was on the property of the Tbilisi Botanical Garden--I'm sure growing naturally. We found this on our very first full day in Georgia, and hardly a day passed the following three weeks without some species of orchid brightening the day up! 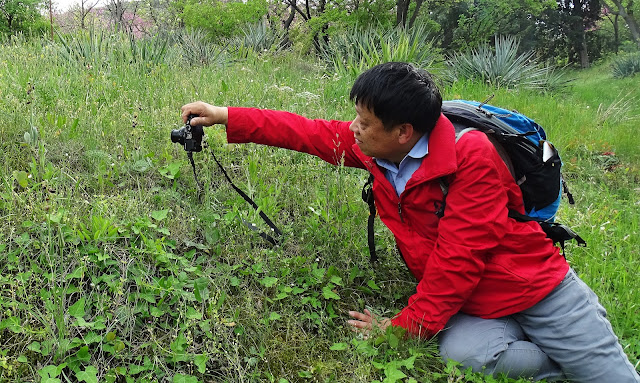 Our fellow travelers the first half of the trip were botanists from the Kunming Botanical Garden, here is Dr. Sun Han, the Director of the Garden and an utterly delightful companion on any trip--full of energy, curiosity and enormous grasp of Science.

Here is what Dr. Sun was photographing! Wish we could get some seed of this: I have a hunch it would take to Colorado!

A glimpse of some orchids from later in the trip: there were masses of these in the foothills of the Greater Caucasus!


The redbuds were just past peak bloom when we arrived in Tbilisi the third week of April...they were just starting to peak in Colorado then: when we returned to Tbilisi last week (first week of May( they were mostly done, and when I got back to Denver, they're quickly wrapping it up--we're about ten days to two weeks behind Georgia here...

We never saw this in the wild, but what a treat to see a plant that was introduced to general horticulture in America by Plant Select in the Caucasian endemic garden in Tbilisi!

Nor are many botanical gardens accessed by Gondola! The old city in the foreground...

A little fruit shop doing a sideline selling nuts that are encased in colorful fruit flour--I regret not buying some! Georgia is an interesting blend of the ancient and stunningly modern: I should blog about that too one day. Life just ain't long enough, alas!

I was told this caters to both Sunni and Shia Muslims. Gorgeous tile work. Don't you love the way Mr. Anonymous posed for me? Better watch out, or I'll post a picture of you looking silly too!

My two fellow travelers were Boyce and Peter Zale (below). This was Boyce's fifth trip to Georgia in the last 20 years: we benefited enormously from his knowledge of the country and flora, and the deep and lasting relationships he's established with Georgians everywhere we went. He's Curator of Chicago Botanical Garden and has also worked as director of Horticulture at MoBot--one valuable asset on an expedition! (You can imagine the war tales we swapped over Chacha, wine and beer. mostly wine and beer).

A research horticulturist and director at Longwood Gardens, Peter was leader of our trip. I came to realize that he gives Dan Hinkley and Tony Avent a run for their money as leading horticulturist in America. In addition to a panoply of intellectual armament, he is almost annoyingly organized and driven: his many skills would intimidate, if he were not fun loving, kind and thoughtful: watch out for this guy! He's America's not so secret Horticultural weapon, What a treat to spend three weeks alongside him, here he is working on our first big outing near Tbilisi.

I had no idea what this was until Jessica Walliser identified it for me on Facebook! And to think people criticize that Social Medium!

Although I have grown Cyclamen coum most of my life (finally getting it right in the last decade), I had never seen it in the wild. Ditto Helleborus cf orientalis, Symphytum grandiflorum, Convallaria majalis, Trachycarpum orientale, Brunnera siberica, Scilla siberica and no end of classic garden plants. I gradually came to the conclusion that the Caucasus are the spiritual homeland of much European and American horticulture.Possibly the very model of Eden. Still trying to figure that one out! 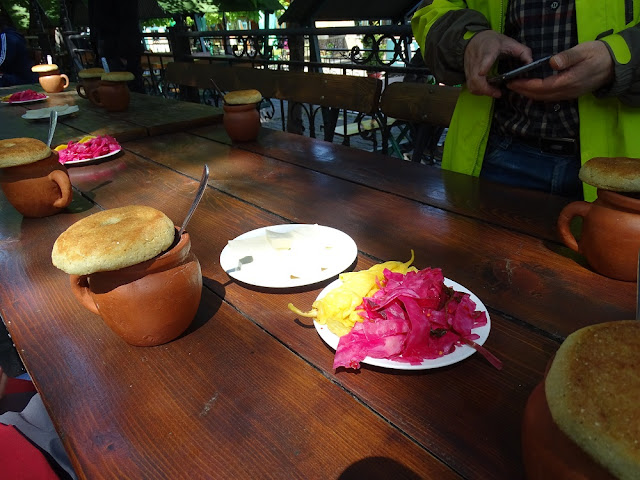 Food at a roadside restaurant. Manana Khutsishvili (our incredible guide and Director of the Tbilisi Botanical Institute's herbarium) fretted more about our food and accommodations than she did the flora (which she knows through and through). Everywhere we stopped for food was a gourmet extravaganza. I should have taken names of all the dishes--Georgian cuisine is as rich, diverse and delicious as any of the world's great cuisines (French, Chinese, Mediterranean for instance). I shall miss the rich flavors and constantly varying menus: the pot in this picture is filled with baked beans reminiscent of Mexican pintos, but with a fabulous seasoning of rich herbs: this became Peter Zale's favorite dish--and I suspect he'll open up a chain of Georgian beanpot restaurants when he gets tired of plants. (I somehow doubt that's apt to happen very soon, however: his devotion to Flora made me feel like an acolyte). I'd like to put it on record that I'll invest in that scheme should it come to pass...

Universal throughout the Greater and Lesser Caucasus at all elevations, this cousin to the European oxslip grows across much of Central Asia. I saw it all over Kazakhstan as well.

The first time I saw this right outside Tbilisi I was thrilled: I've grown this on occasion, and have had a love affair with this genus for decades. This petite annual, however, has never settled down for me. Unfortunately, we never found ripe seed. But we did find that it was abundant and ubiquitous. We saw this again and again all over the drier steppe throughout Georgia from the far eastern corner of the country and throughout the great Central Valley wherever the native steppe hadn't been replaced by cornfields, city or intensive agriculture. It was always pretty uniform in Georgia--hairier than the forms I've grown from Turkey and the Near East. The proper scientific description of this should include "cuter than a bug's ear"!

I first grew this from Annie's Annuals (that purveyor of marvels!) and since then from seed several times. In my next (and last) Caucasian post I shall dwell further upon it. This was taken at Turtle Lake at the north end of Tbilisi where I first had a chance to really enjoy it up close. After that, we drove past millions of these that filled cornfields, roadcuts and sparse woods everywhere at lower elevations. The European corn poppy is lovely, but this species towers over it in size and flashiness: I'll never see it without thinking of Georgia!

I made this my Facebook Avatar for a week or so after we arrived in Georgia: I can do no better than quote my explanation when I did it:

"My favorite author, Vladimir Nabokov would have been 119 years old last Monday. He was the world's authority on the New World Blues, but his life's dream was to explore for butterflies in Central Asia and the Caucasus. 100 years ago he did that in the Crimea, not too far from where I am. This blue (Polyommatus icarus) did not budge and let me photograph it carefully today above Turle Lake near Tbilisi"

If you have not read Nabokov's "The Gift" you are missing out on a crowning masterpiece of world literature.A multilayered masterpiece that compacts twenty years of the Russian intellectual diaspora, the Berlin renaissance smothered by Hitler, and all of the mountains and magic of Eurasia, compacted neatly. And oh yes, a killer love story. This butterfly flew right out of that book.

I have seen various forms of this fantastic plant from the mountains all over Greece, Turkey and all the way to Mongolia: it is one of the most diverse, complex and wonderful species of wildflowers--and a classic rock garden plant to boot. There were several forms of this that grew everywhere in Georgia--not only on the steppe where it was widespread, but high up onto both the Greater and Lower Caucasus. It would be great fun to assemble a collection of this from across its range (plant collectors are as nerdy as any collector out there--we just have more fun!)

And the Great Caucasus in the distance: we're extremely close to Azerbaijan in this picture. This may be the only picture I have of Boyce without his shiny white teeth in full view: he is a born traveler who relishes every moment and takes everything in stride. You couldn't have a better companion on a collecting trip (or elsewhere)! Miss you already, buddy!

I really should have saved this for its very own post. I stupidly didn't check my settings and all my pictures that day are a tad overexposed (the late day sun was rather strong). And I was so excited I didn't concentrate and do a single decent closeup. This was actually NOT in Vashlovani Nature Reserve but to the north ans slightly west of there--a spot and a day I shall never forget. If you can excuse the wind and my horrible breathing you can even see these in video if you click here.

My last little parting morsel on this penultimate blog: a chasmophytic polygala from Vashlovani Reserve--it looks EXACTLY like our Colorado Plateau P. subspinosa, except the flower color is icy blue instead of magenta. And I have seen a similarly spiny steppe milkwort on the Karoo in South Africa...these connections and reflections across the world's steppe have been defining moments in my intellectual and spiritual life. I count my lucky stars every day! And thank you for your indulgence in reading about this, my virtual life!