I'm not sure that these little piggies would squeak: the ones responsible for the common name are the glossy East Asian sorts like cordifolia, delavayi, crassifolia--which are much more commonly grown in gardens than this furry little waif. Rub their leaves and you'll see why they got the dreadful name. Tonight the temperature in Denver is expected to drop to 23F--so I expect the foliage of the plantings we have of this species will be black and gray in the next day or two. We peel the wizened leaves off over the course of the winter--and at Chionodoxa time (vide above) what could be more enchanting than these wonderful nosegays? 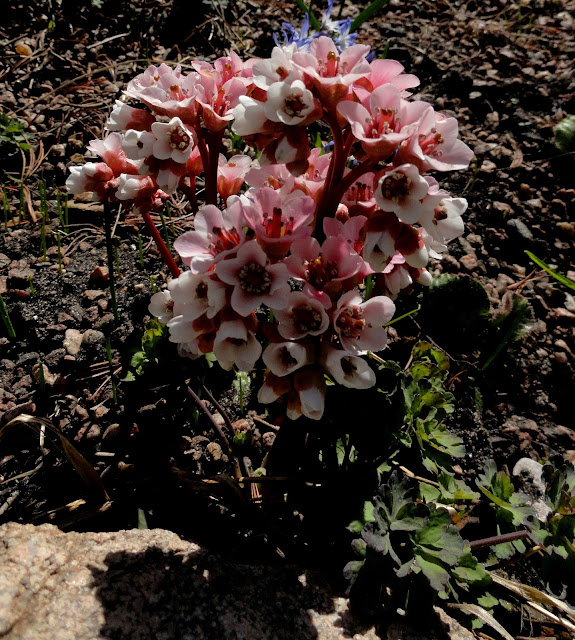 Here's a closer look at the one from Denver... 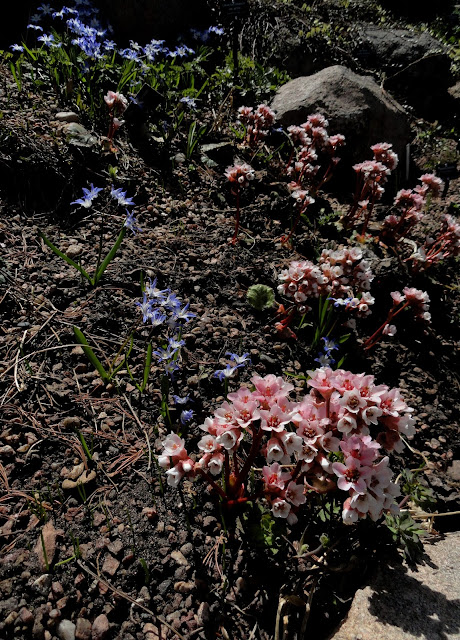 And a look at the colony from another angle. It's amazing that Bergenia--so widely grown throughout Western Europe and the coastal areas of the US--has never gotten a better common name than
pigsqueak... 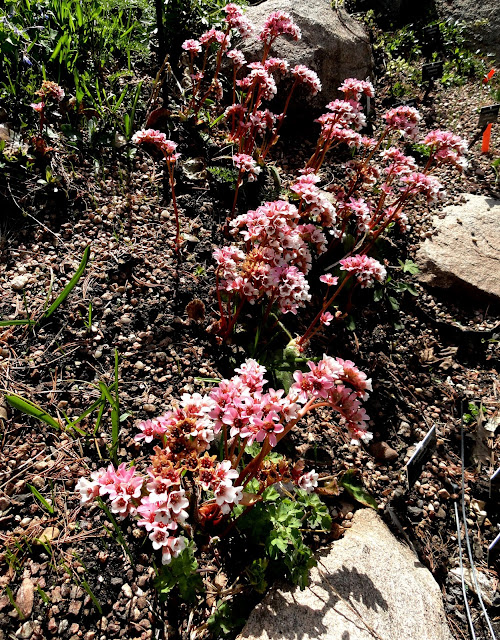 Here's a picture when the colony was especially lush and happy one spring...I was pretty smug about it and thought we'd achieved something pretty cool. 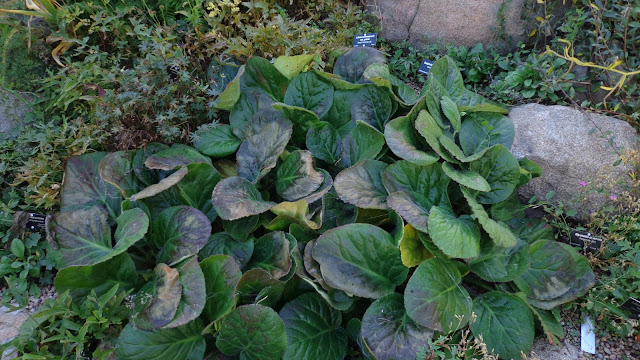 Here are the fabulous leaves, touched with the first frost (the black smudge on the leaves)...it would be nice if it were evergreen, of course. But it's not. The gigantic fuzzy leaves are worth it nevertheless. 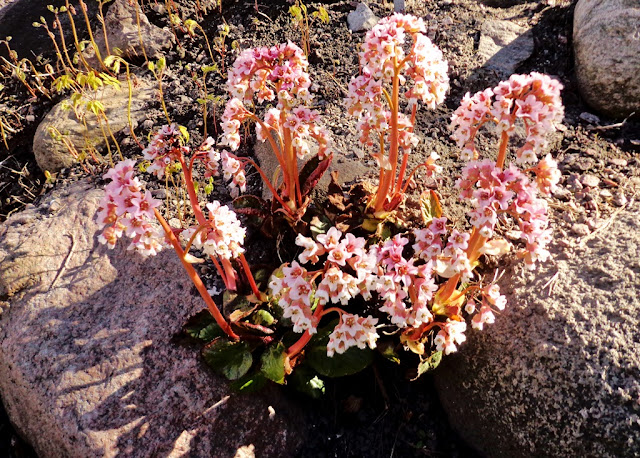 And then we visited the Copenhagen botanic garden in early May of 2013: it had been a very late season, and the Bergenia was at its peak--here closeup (rather like our's)... 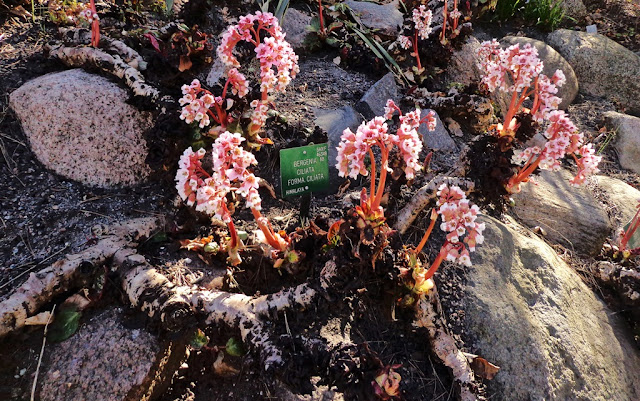 Here you can see the enormous trunks it formed over the decades--almost like a prostrate tree... 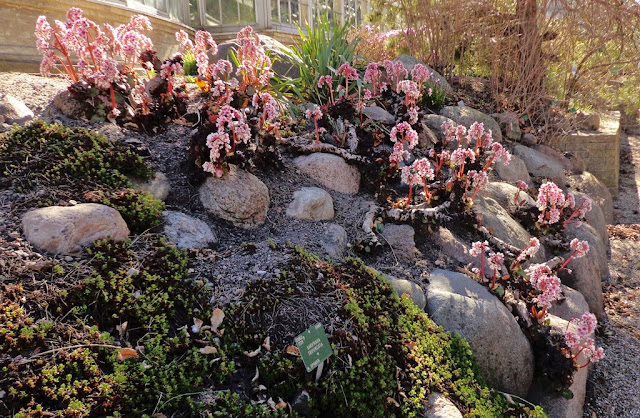 The magnificent extent of the colony was breathtaking! A real spectacle on the steep slope around the side of the Conservatory near the entrance: I can imagine the thousands of people who are dazzled by this every year! I couldn't believe this is what our measly little clumps would do one day! 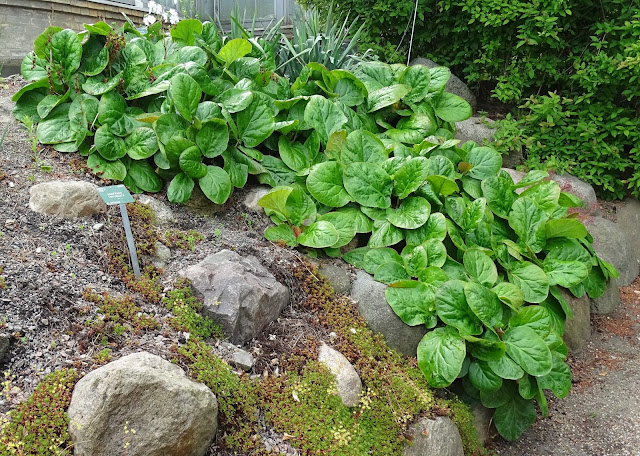 Here is the same slope photographed late last June when I was lucky enough to spend four days in Copenhagen at the botanic garden and the Herbarium doing research for my trip to Greece and Turkey. The plush leaves were unbelievably big and lusty! Yeee HAW! 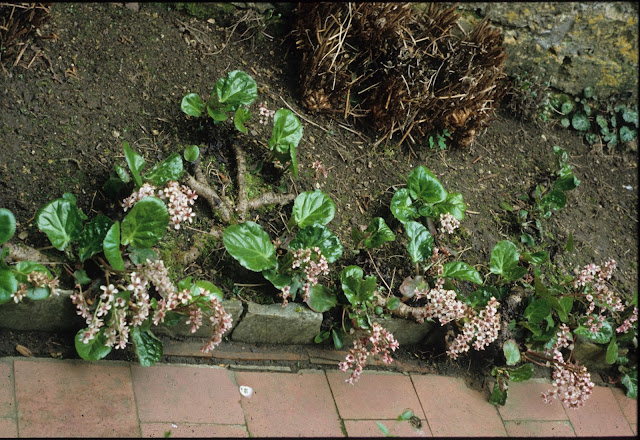 I remember the first time I saw the plant was at Hidcote Manor in Gloustershire in England--growing along a path: I think this is a different form with much glossier leaves. Scan of a transparency taken in 1981--nearly 35 years ago! This is a passion that's persisted! 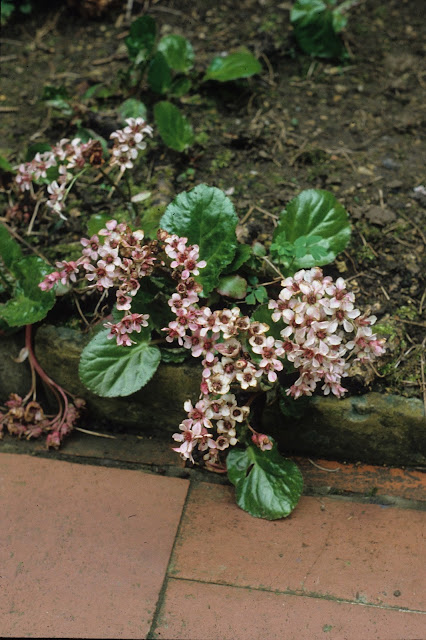 Another shot of the Hidcote plant--quite fetching. It would be fun to see this growing alongside the form we grow and the one from Copenhagen for comparison.... 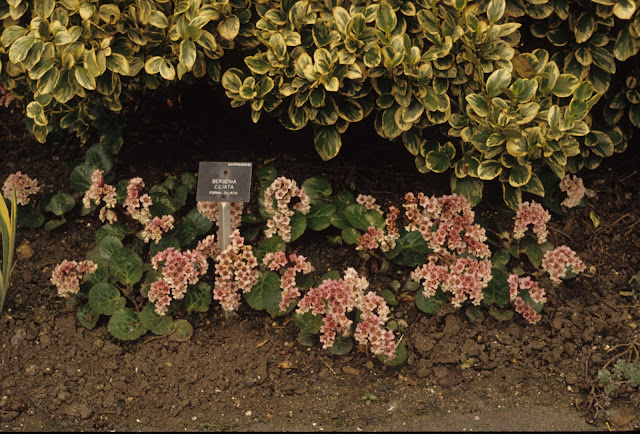 And here is another slightly different form from RBG Kew likewise taken in 1981.

The species comes from the foothills of the Himalaya--and not at the highest elevations at that. Which may explain the deciduous habit? I wonder how many times it's been collected there, and what other sort of variation might exist in gardens today. All I know that deciduous or note, it's a plant I would not to be without!

I wonder if I'll ever be lucky enough to ever go to its wild haunts: I would love to append some pictures of it in nature...instead, my next blog will feature a fabulous Bergenia I HAVE seen and photographed above treeline in the Himalaya--possibly the hardiest and most vigorous of all...
- November 06, 2015