It was pretty chilly in St. Johns, and Todd Boland (our wonderful host) was dubious we'd find anything blooming on the Hawk Hills, but we proceeded dubiously. As we drove off the blacktop onto the gravel road we marveled at the crisp horizon: it had to be 10C warmer up there than down in town, and there was barely a breeze. I never thought I'd see Todd so surprised! The road had washed horribly, and Todd was a tad nervous maneuvering his coupe through the boulders, but a few hundred feet later we were on the summit, greeted by two fellow rock gardeners who'd decided to visit the same day--and pointed out this clump of Diapensia next to the road: you could have knocked Todd over with a tuft of reindeer moss for a few moments as he gathered his wits. I enjoyed many, many things about Newfoundland (which I shall share anon), but Hawk Hill was literally the summit!

Tundra in late winter is an acquired taste, and this is a great place to develop that taste: the ground was a Persian carpet of textures and I imagine a few weeks from now it will be even more vividly colorful--but for me, this was an enormous pleasure and education.

Apparently, Gene-jockey botanists now tell us that the alpine azalea is actually Kalmia procumbens: I can hear horticulturists howling already! Bad enough we have climate-change deniers, but we must not try and deny what the geneticists reveal as true. I've seen the alpine azalea (must we now call it alpine mountain laurel?) in Alaska and also on the Alps: two other magical perfect warm days that glow in the cathedral of my memory like stained glass panels. Iconic plants like this (no matter how tiny they may appear in a picture) loom largely in our personal iconographies. I grew the Japanese form of this species for many years as a youngster in my parents' garden in Boulder. I'd purchased it from the same British Columbia nursery (Alpenglow) where Bodil Larsen purchased her large plant of the same vintage (possibly 40 years ago!) I'd seen the day before. This sort of contrapuntal pattern stitches together the vast network of details in a Plantsman's brain--as complex and finely textured as the patterned ground of tundra! If you can follow this paragraph, you too must be a Henry James fan.
Here's a monster azalea...if you're the size of an ant particularly....Bodil's clump was maybe half this size: I would guess this must be hundreds of years old.


On Pontresina one luminous late June day in 1986 I gazed down from the ski lift (sitting next to Ed Connors) onto vast pink cushions of these interspersed with huge cobalt clumps of Gentiana acaulis in full bloom. Hardly anyone was on the slopes that afternoon, and we walked down the mountain among masses of flowers, marveling the whole way. My life has been littered with epiphanies like these: hard to make people pity you, alas.


There were cushions like this everywhere: as gorgeous in bud as they are in bloom. There were two genotypes--some with seed stems that would not bloom until late summer, and this precocious form: Todd suspects they may prove to be different species. I'd like that.

Miniscule plants of leatherleaf (Chamaedaphne calyculata), a ubiiquitous ericad found everywhere in the Maritimes. We'd seen some a meter and more tall a few days earlier near Halifax. It would be fun to grow different ecotypes of this in cultivation to see how they'd develop in a garden: I suspect some of these alpine miniature clones would stay small.

You will have to take this on faith, but this is Empetrum eamesii, one of the terrific endemic taxa of Southeastern Canada and northeasternmost U.S.A. It was once classed in its own family (Empetraceae) but has been gathered into the Ericaceae recently. I was chagrined to discover that crowberries are considered easily grown garden plants in Newfoundland: they're so common there nobody bothers to grow them, however. Harrumph. I suspect there is someone who could determine the age of this specimen. I wouldn't be surprised to find out it was a thousand years old.

One of the most vivid lichens: a treat to find. Love the common name.

The wonderful diversity of groundcovers--willows, ericads--and who knows what else--were spongy in masses of mosses and lichens of many kinds. Walking through them was springy and invigorating.


Compact plants of bog myrtle coming into full bloom. This strange, aromatic, deciduous as well as dioecious circumboreal shrub is in a small family that includes the evergreen bayberry (Morella pensylvanica) we saw not far away, and ubiquitous sweet fern (Comptonia) of eastern woodlands. The only other genus in the family (Canacomyrica) is endemic to New Caledonia in the East Indies--ain't nature grand? 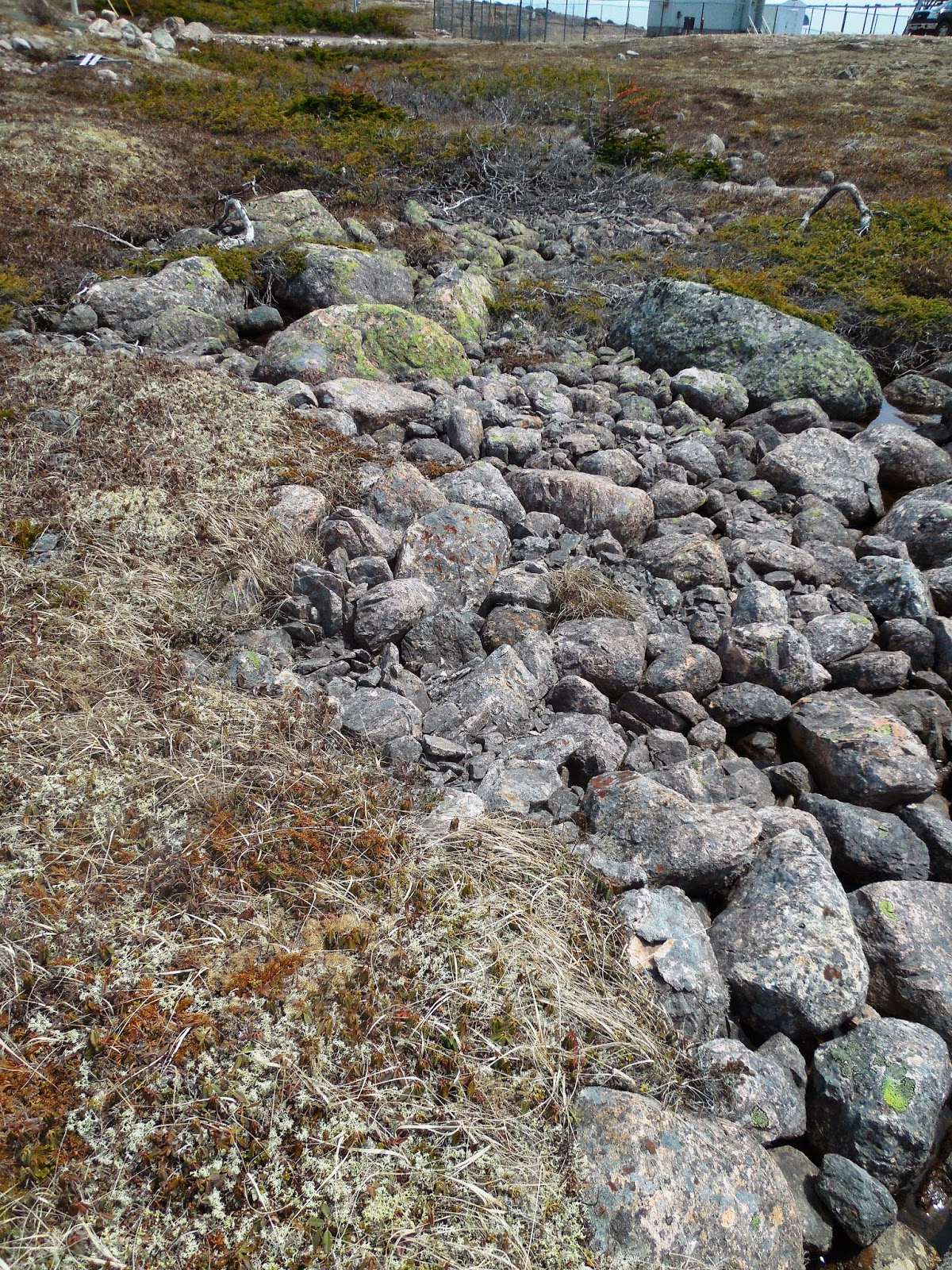 Patterned ground of rocks heaved up by solifluction in winter: pretty awesome power of permafrost! 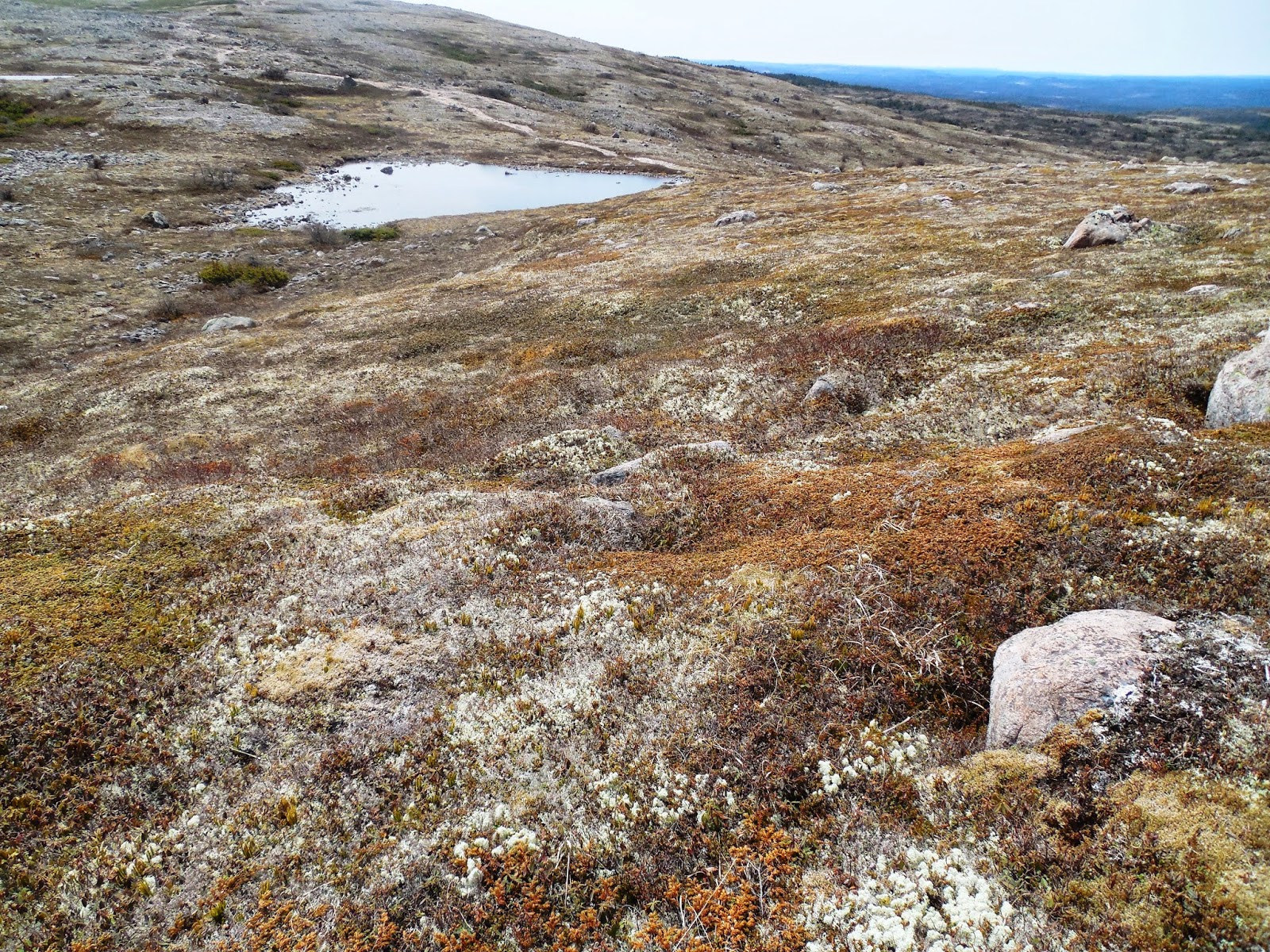 I can't get over the novelty of pitcher plants on top of alpine summits!﻿ 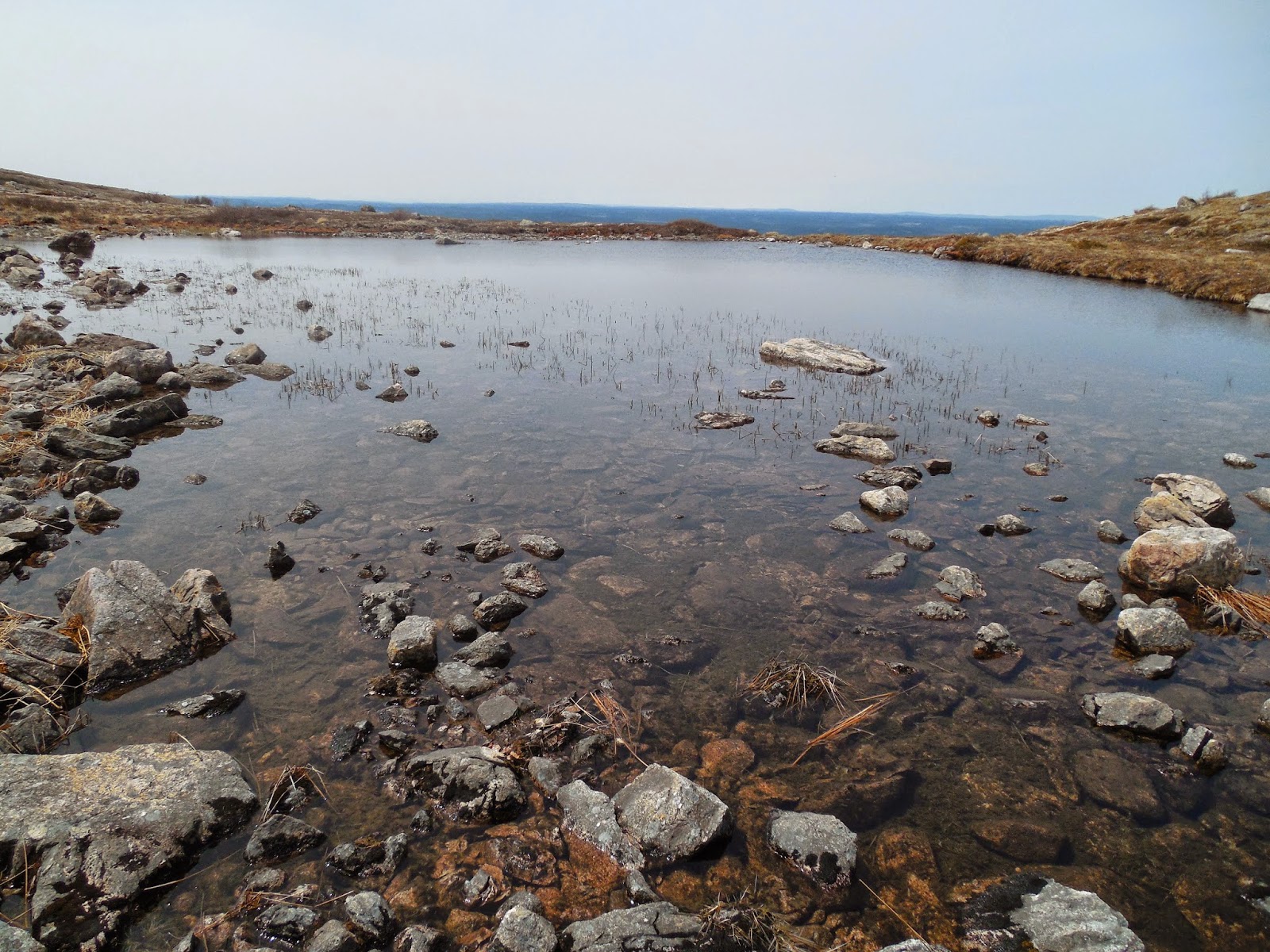 It occurred to several of us as we gazed at this alpine pond that it might have inspired the idea of an "infinity pool" margin...﻿ 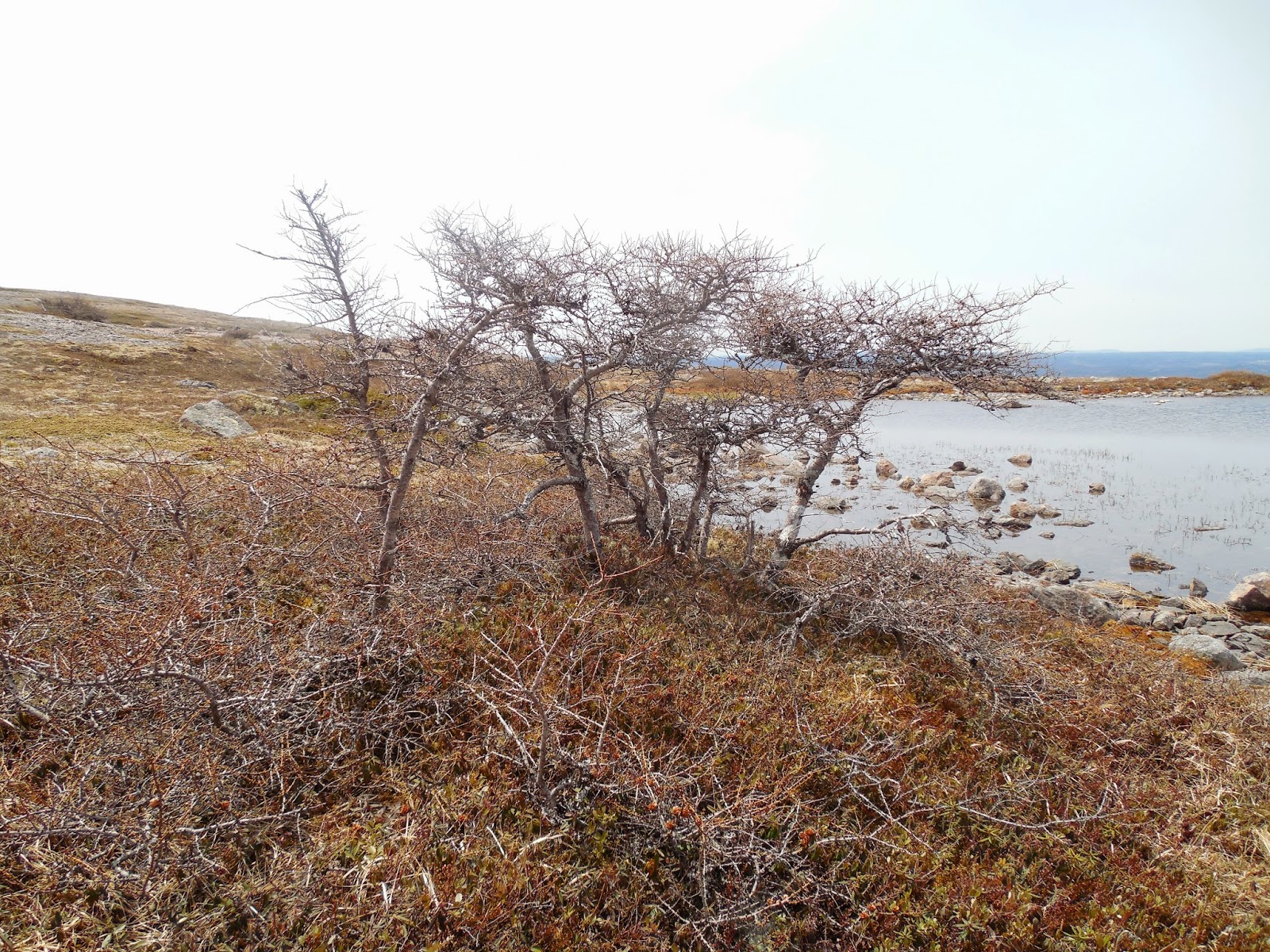 A grove of a half dozen gnarly birch would make great candidates for a bonsai master!  ﻿ 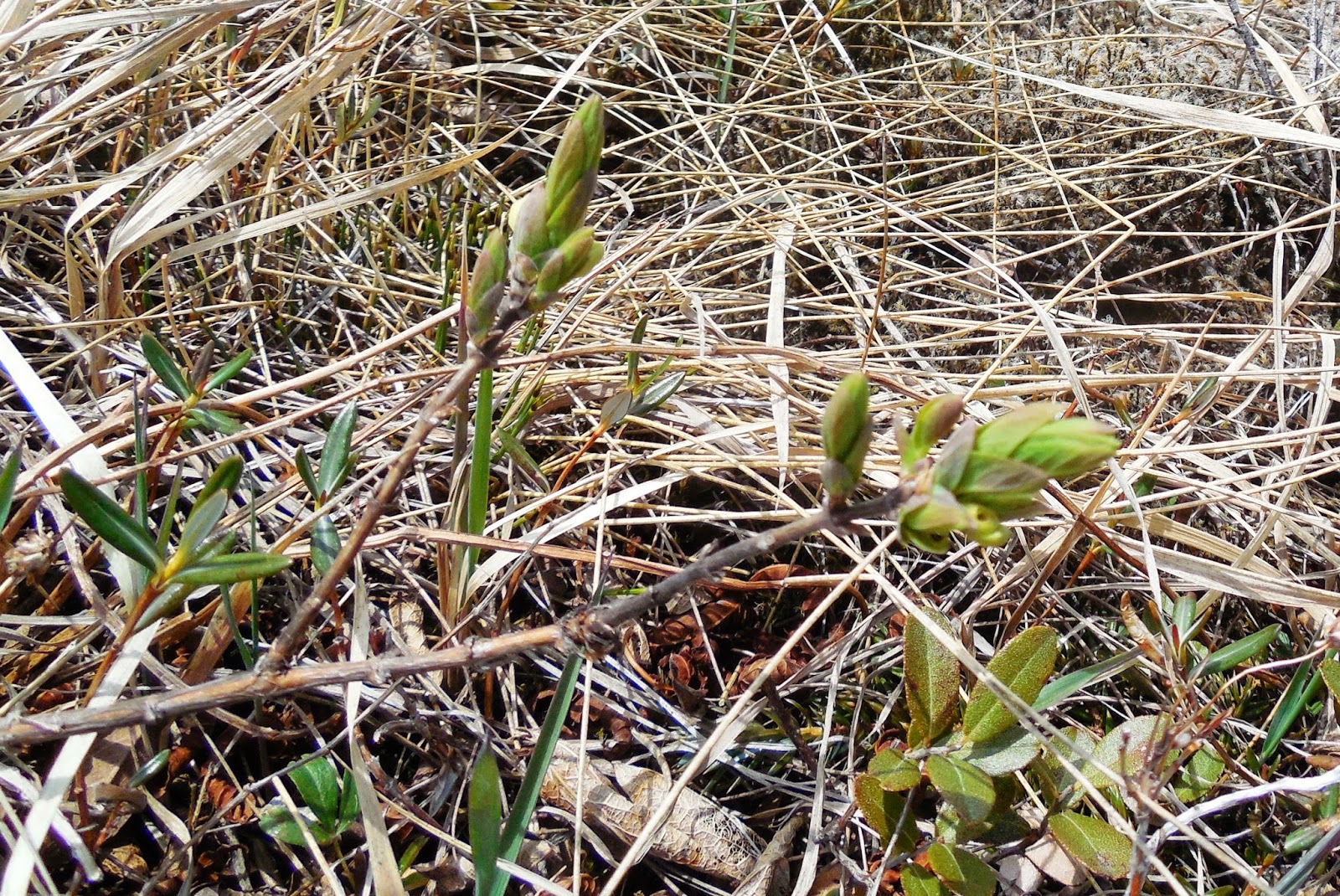 We were a week or two early to see the yellow twin blossoms on this compact, alpine honeysuckle. I saw remarkably similar plants in the Altai Mountains of Kazakhstan. 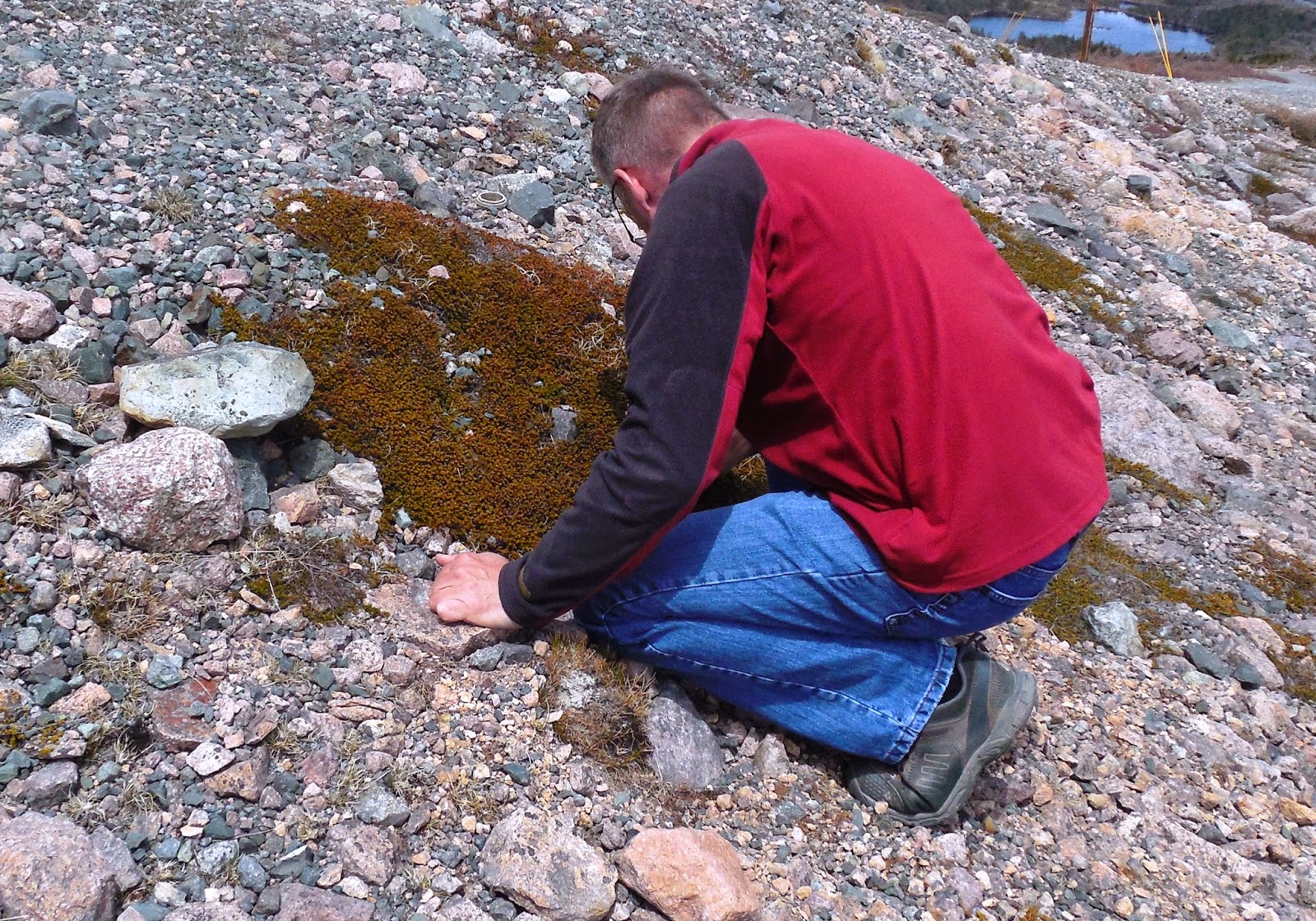 Todd inspecting a dense mat of Empetrum eamesii--one of the many local specialties of eastern Canada.﻿ 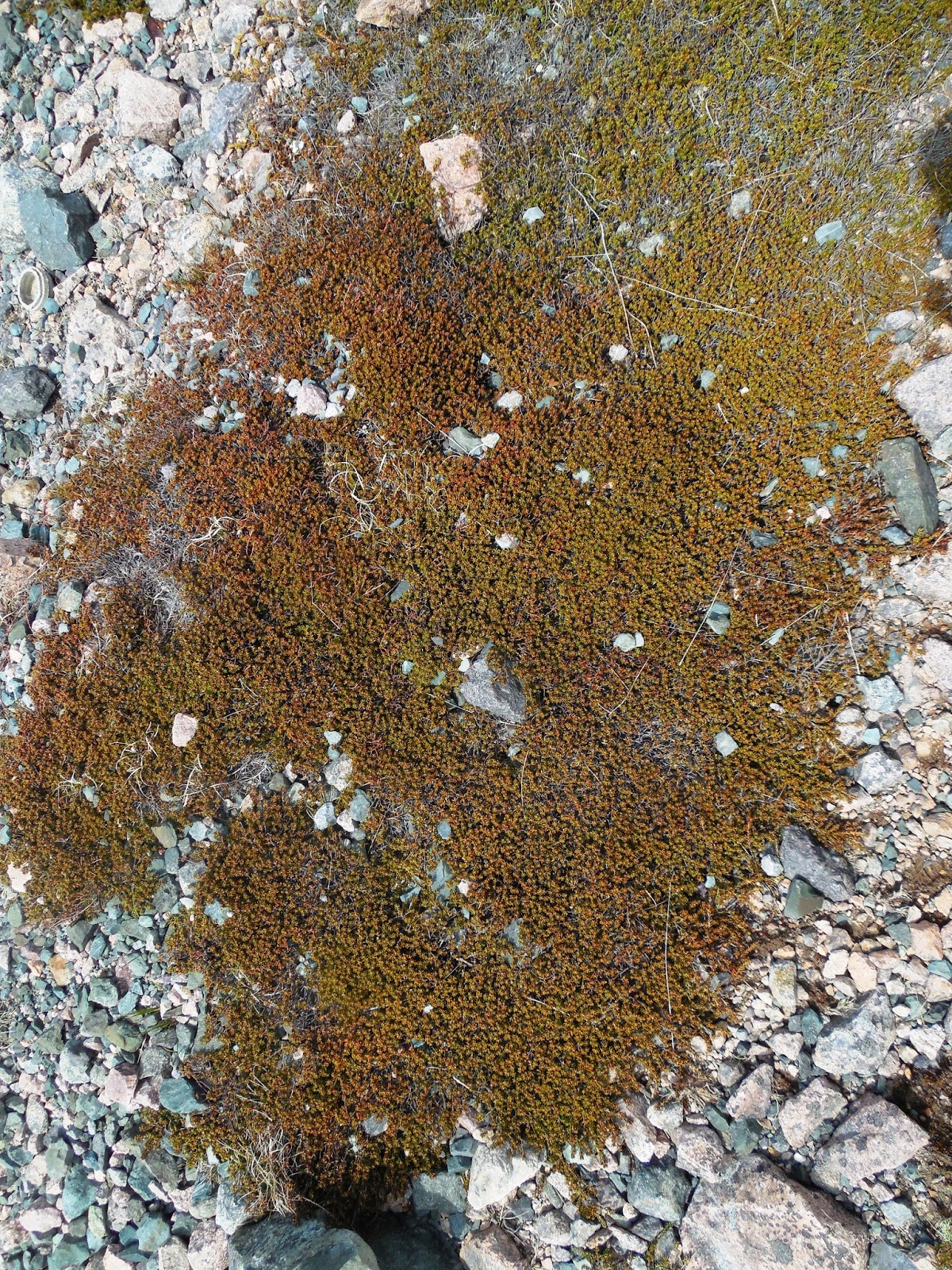 I suspect this one could be hundreds of years old.﻿ 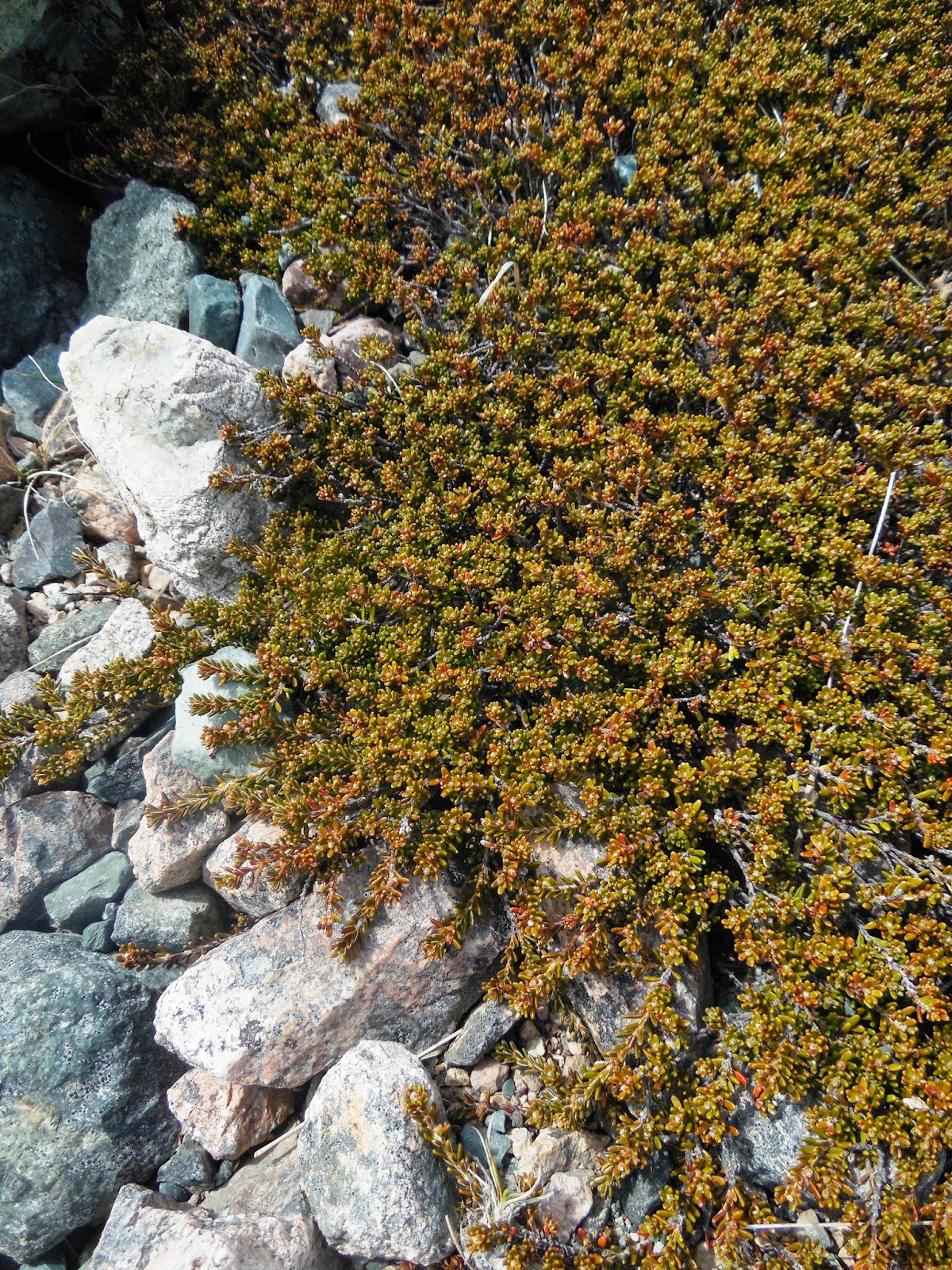 I don't recall finding club mosses in tundra like this anywhere else: I've seen Huperzia haleakalae (I find it amazing our species has been classed as this) only two or three times in Colorado tundra. I am at a loss to guess which ones I saw in Newfounland: Todd guesses they have a dozen or more.

Todd was able to identify this species, which I have seen looking quite different in dark woodlands throughout the Eastern states. I never dreamed I'd see it everywhere on Newfoundland tundra! 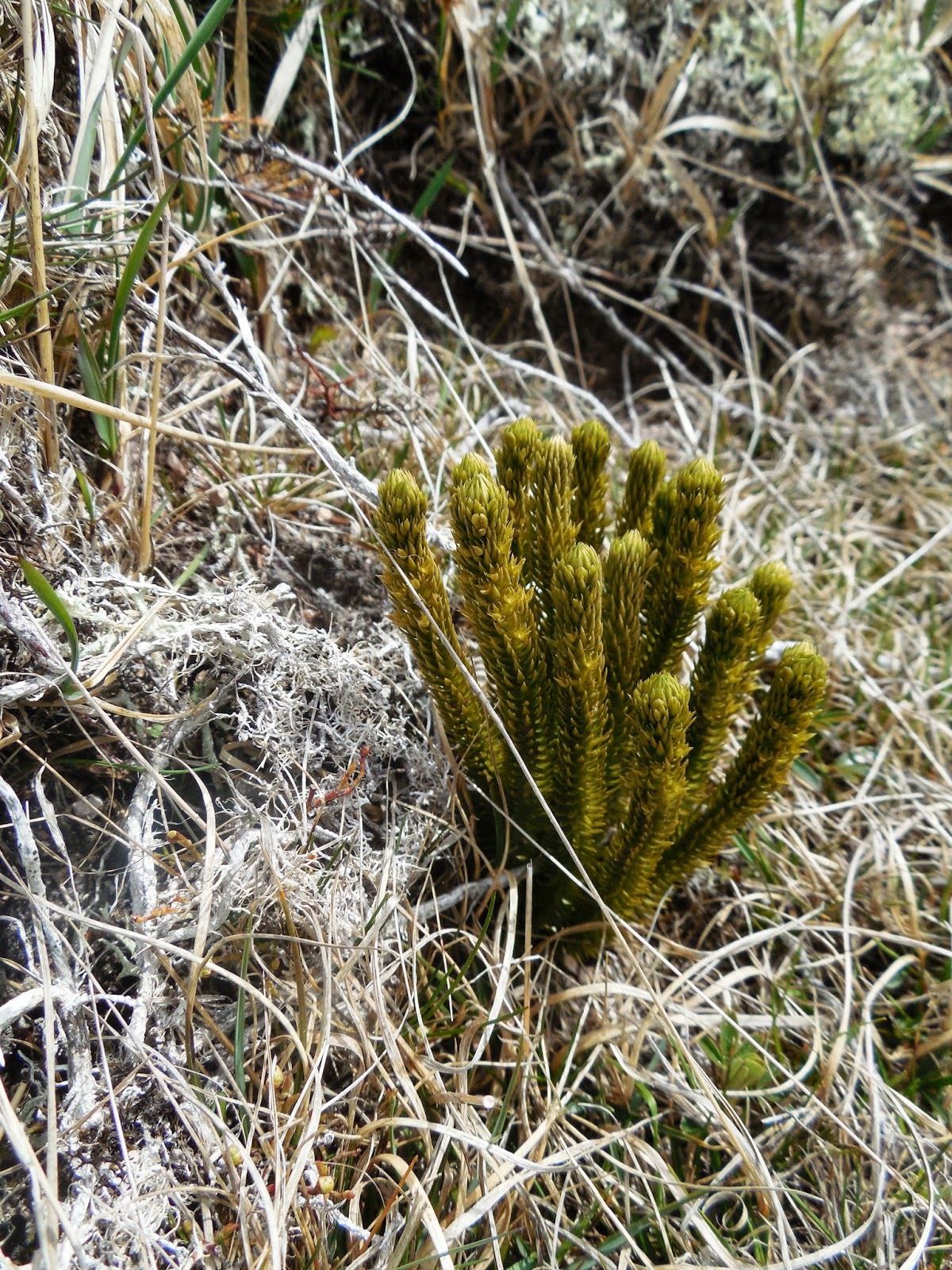 Yet another mystery club moss...

I believe this is one of the alpine club mosses in a distinct genus. 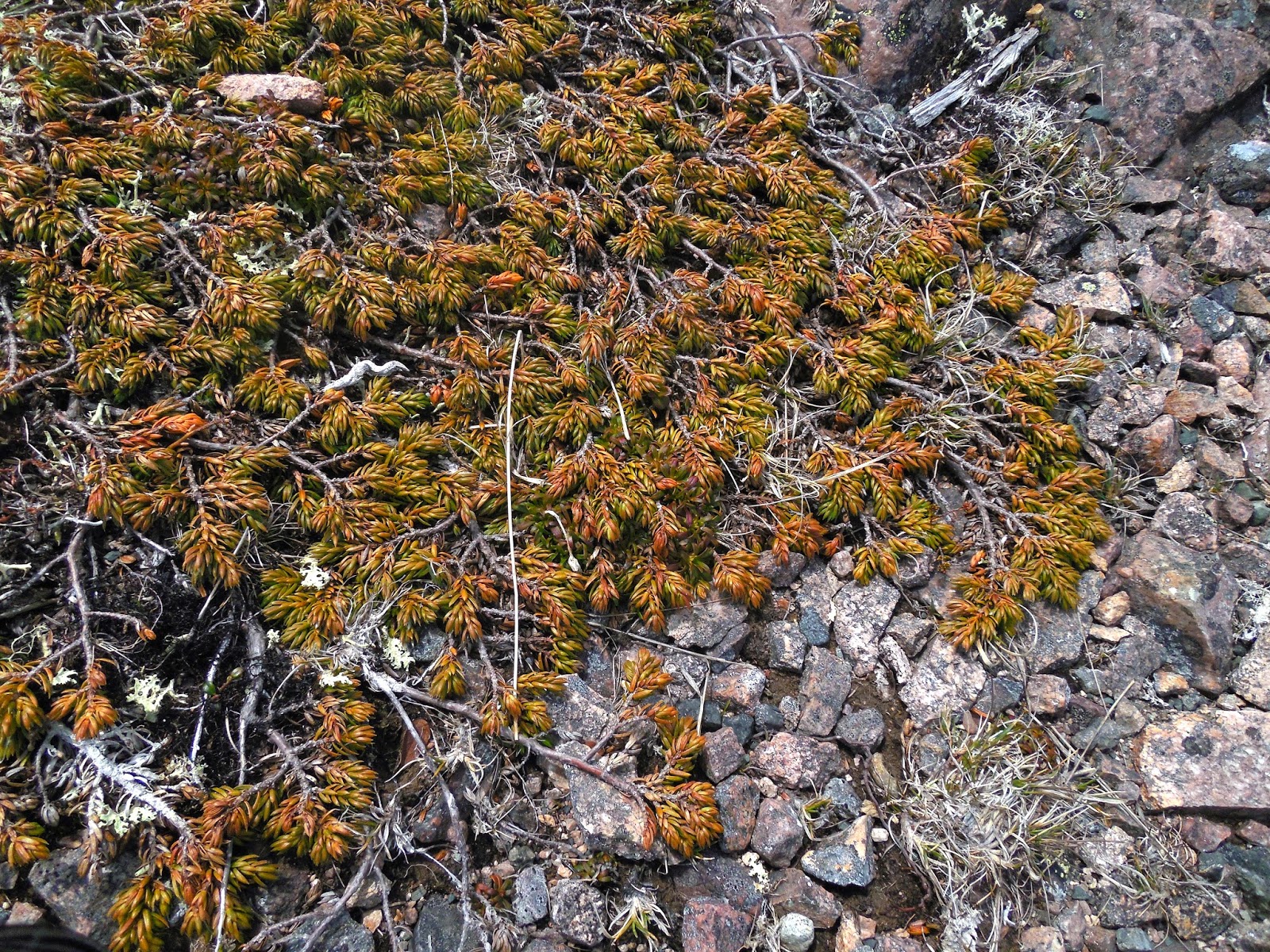 Juniperus communis--the tightest form I have ever seen! 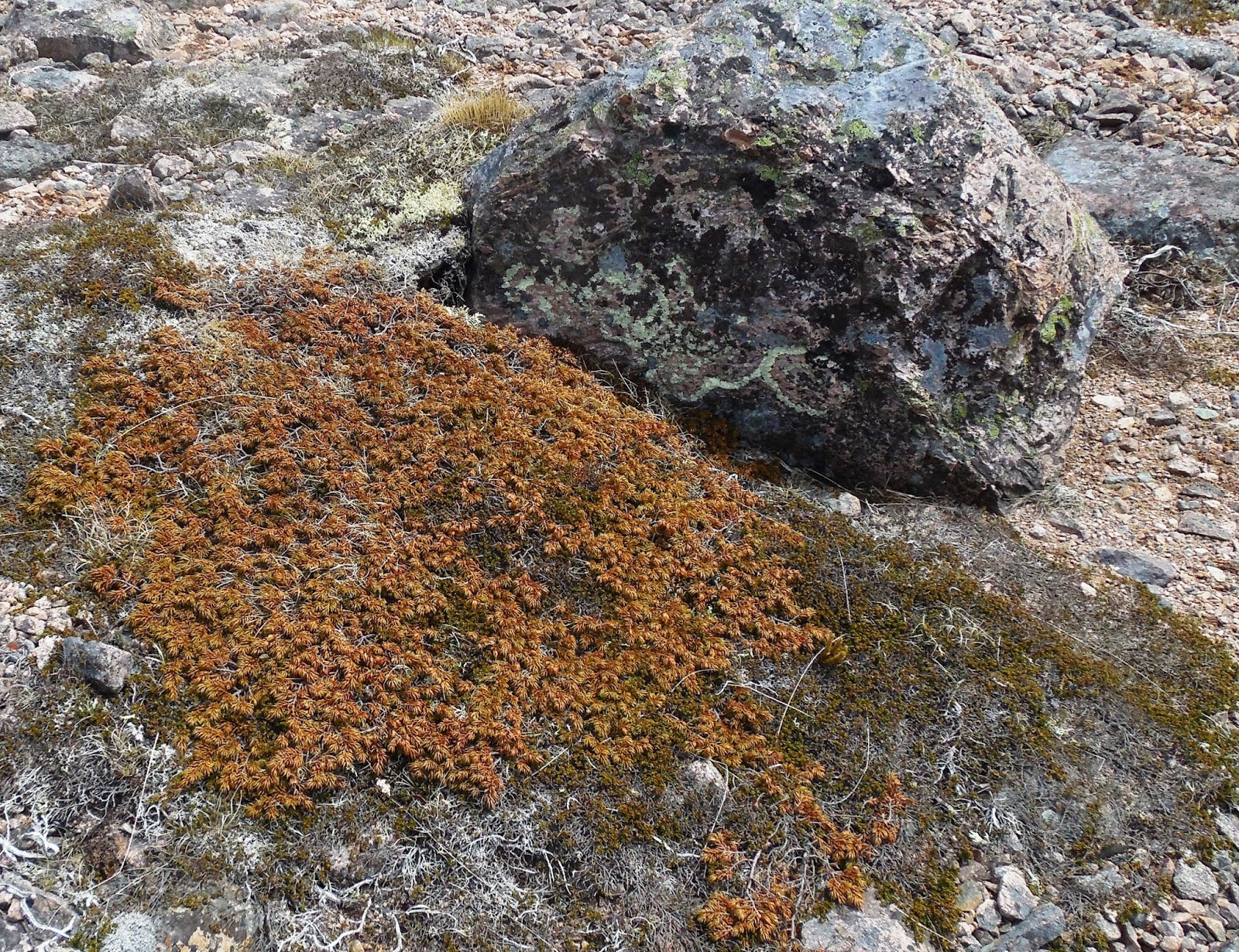 I had a hard time convincing myself this incredibly tiny mat was the same plant that forms a pencil thin tree in my gardens, and sometimes knee high mounds in the Rockies!

Here you can see it in the distance, making a gray-green swath around the rock! 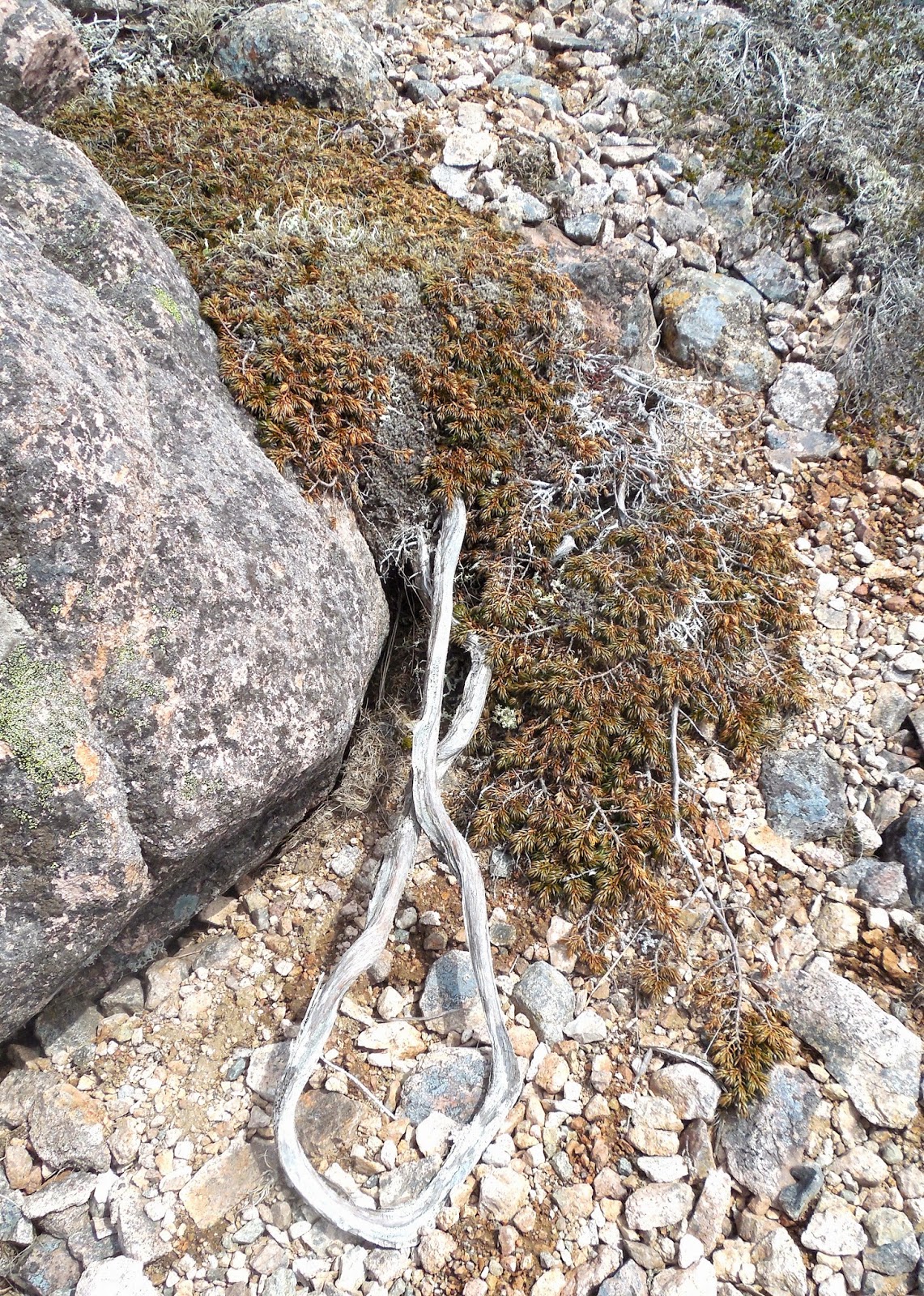 Get a load of the trunk on this little juniper! I can't imagine its age. A bonsai master would lust to have it! 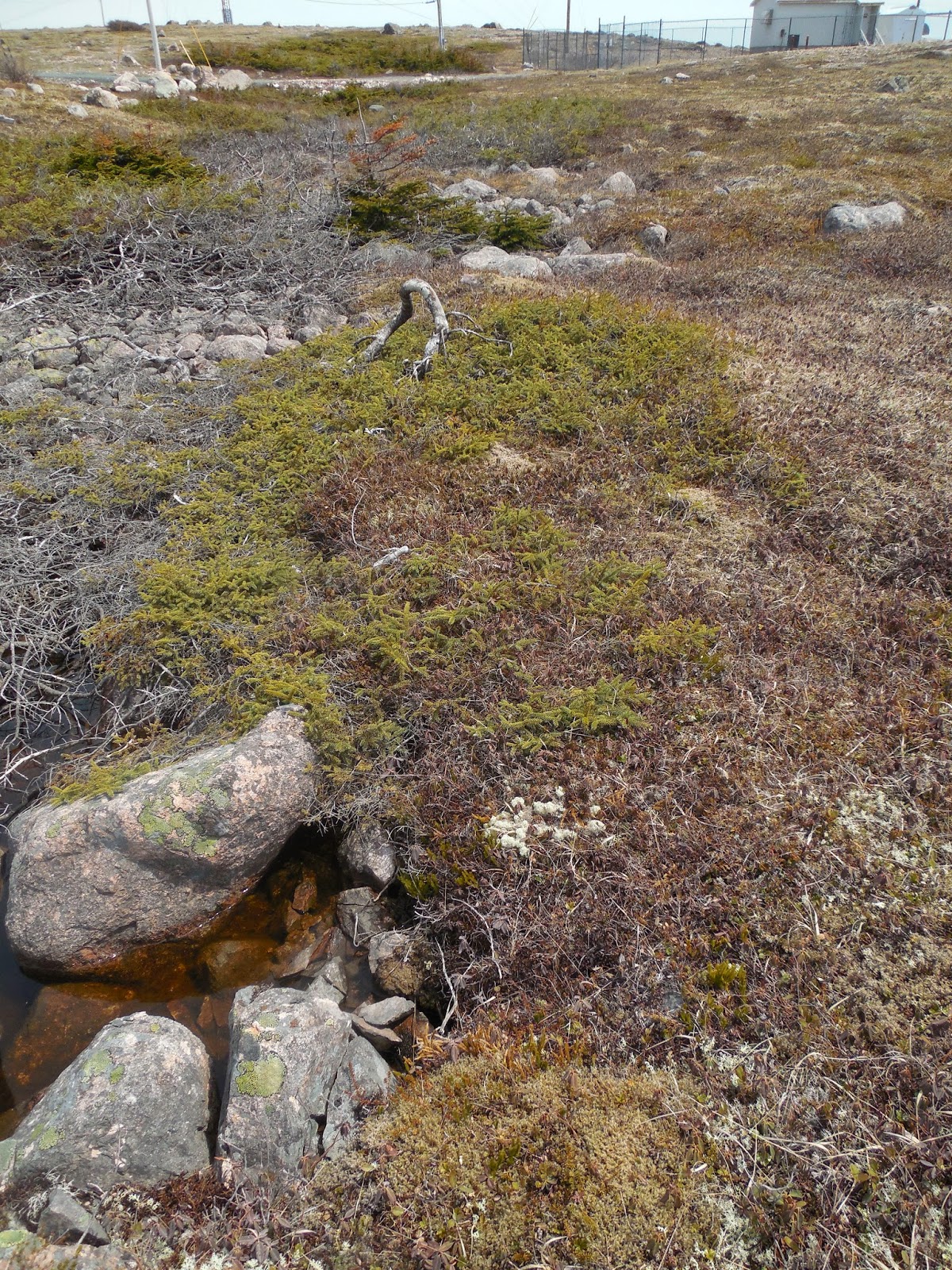 Here is one of the northern spruces forming a krummholz, also with a strange trunk!﻿ 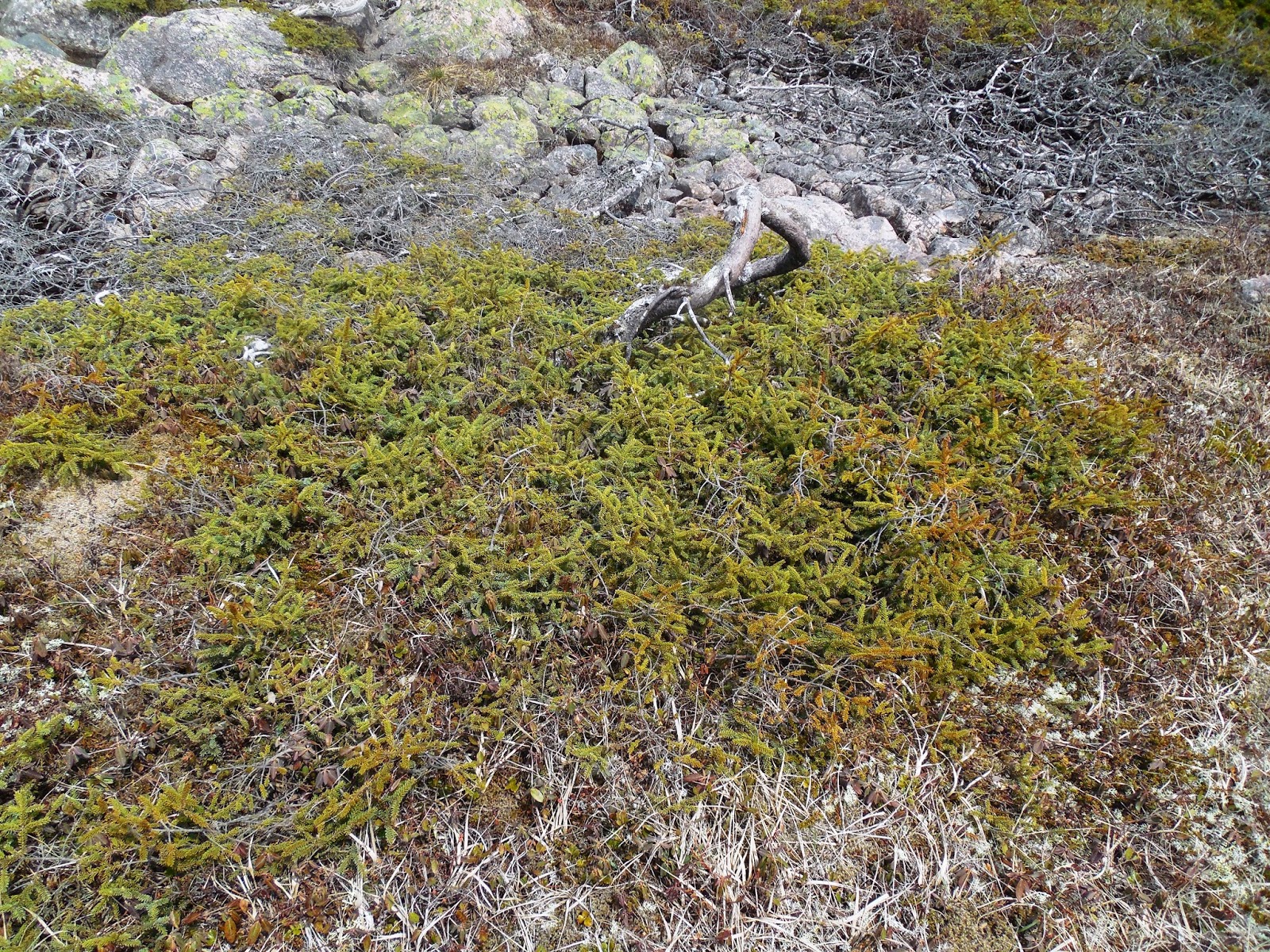 A few other views of the spruce. 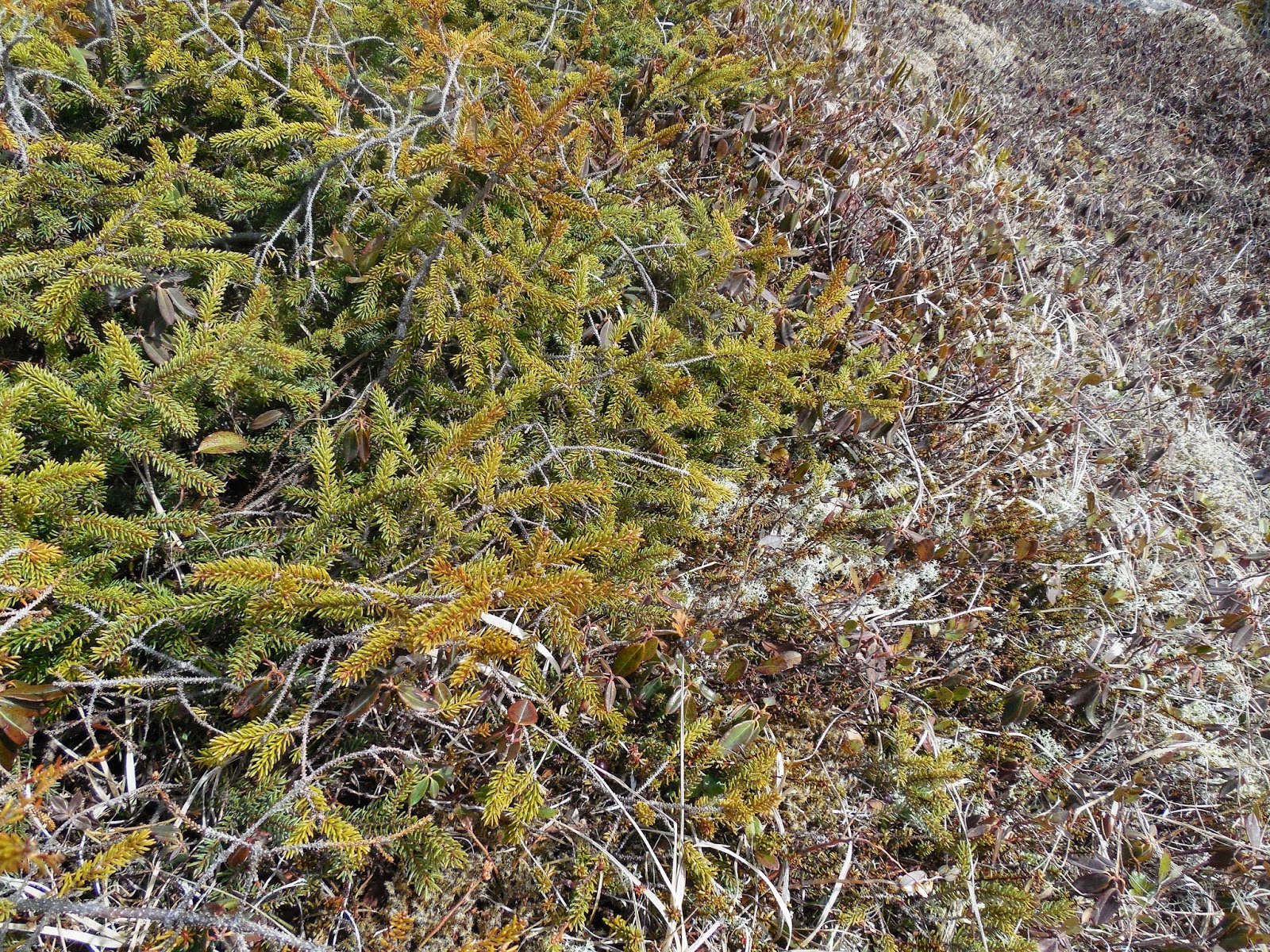 It would be most interesting to grow this spruce from graft or cuttings--and see if it stayed tight like this!﻿
Below I conclude with a picture I took of the sun with my little point-and-shoot: I'd never seen a halo around the sun like this except in winter. I believe this is similar to what they call a "sun dog"--and Todd commented he'd never seen one so bright in summer either: Newfoundland is full of wonders! 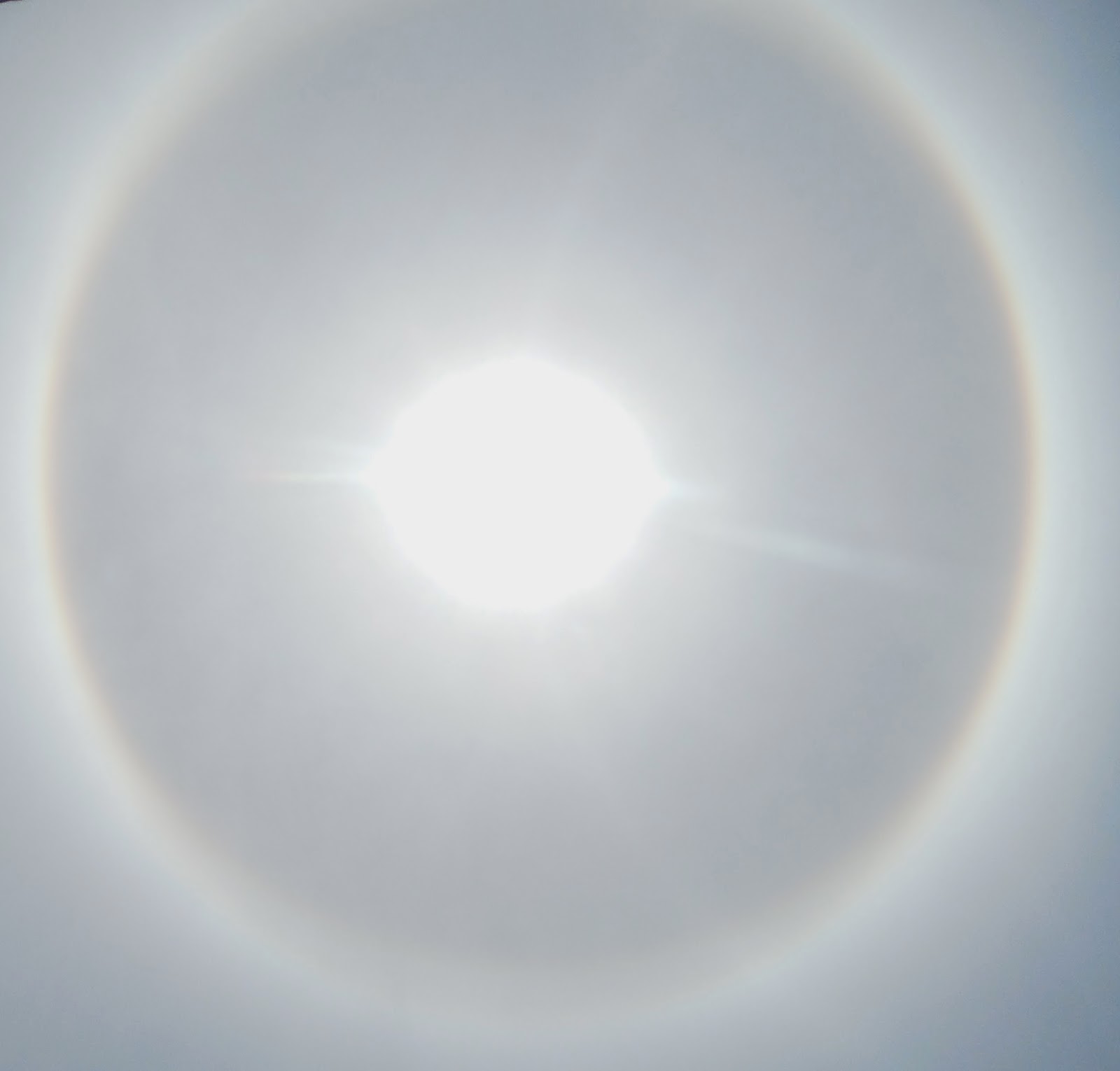