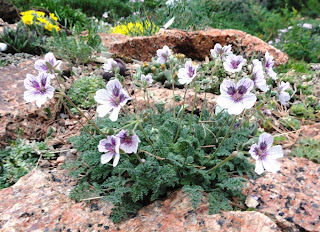 Androsaces, gentians, primroses, saxifrages and all their alpiny ilk are so brilliantly colored, so spectacular in their performances, like Prima Donnas who have hogged the mike and utterly upstaged those quiet, somewhat less flamboyant but ultimately more talented character actors that often carry the show. The genus Geranium has become a mainstay in perennial gardens, but Erodium has not really gotten its due, especially in rock gardens where they shine and shine for months on end. Long after the last primula and aubrietia have faded, the erodiums bloom and bloom. And even in the short months when they are not blooming, their filagree foliage adds color and interest to the garden. Filagree! That may be the problem...filaree (Erodium cicutarium) looks uncannily like its more worthy cousins, with bright pink flowers and trim, ferny rosettes that turn a brilliant red in winter. Only this last is a horrendous and pestiferous weed around the world--it's much more restrained cousins have paid the price, I fear...including tiny morsels like the Erodium petraeum selection above... 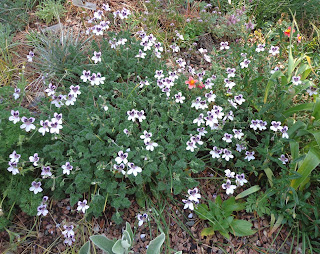 Taller and rangier, Erodium cheilanthifolium has been lumped botanically with E. petraeum and even E. crispum--as well as a half dozen other ferny leafed, silvery Erodiums that grow in the mountains surrounding the Mediterranean. Splitters have named many of these, but lumping botanists have blurred the lines excessively, in my opinion. I grow a variety of these in my home gardens, and they are distinct enough to include in an even small rock garden collection. There have been many hybrids between these "species" which only adds to the confusion: I suspect the nomentclatural madhouse that these silvery, dense cushioned erodiums are in may be part of the reason they are avoided by gardeners! 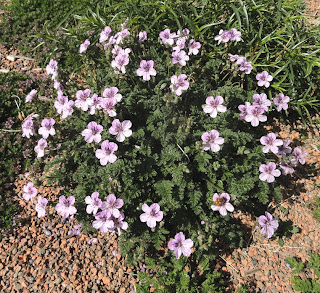 As you can see from the first three I have shown, different forms are quite distinct in effect in the garden, so it is worth seeking out a variety of these--the flowers are fascinating up close with their colorful blotch and striations, and the plants make a decent impact from afar. And I daresay there is not a day between April and October when there won't be a few flowers on these to look at: is that a winning trait in a plant or what? 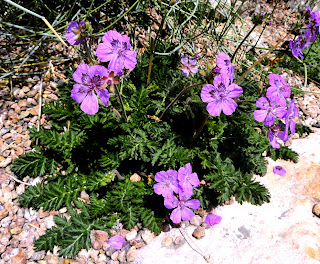 Lionel Bacon, past president of the Alpine Garden Society of England, was responsible for first collecting and disseminating two similar and very showy species from Spain: Here I show the slightly smaller of the two (size seems to be their main distinction), Erodium castellanum generally stays under 8" tall, while Erodium daucoides can send flower stems above a foot in height. Both species have flowers in that bright lavender-magenta shade that seems to have been perfected by the genus. And the markings are never quite the same from plant to plant: definitely a keeper! 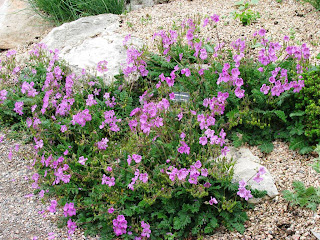 You can see once again that these plants are fascinating up close, but they make a long season of  bright color from afar--and the foliage is evergreen to boot: not many rock garden plants can boast that kind of versatility! 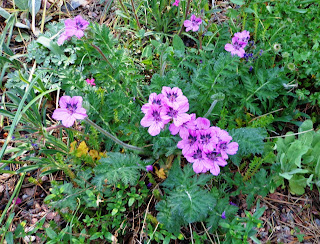 Erodium macradeum looks superficially like the previous two species, but the tuft is generally looser, the foliage more coarsely cut and the flowers even brighter and larger. It never produces the lavish displays of its fellow lavender pinks, but the flowers make up for their sparesness by being especially brilliant. All of these are quite long lived in the garden, and if you plant more than a few plants, you are apt to get seed and lots of welcome seedlings over time to perpetuate you colonies... 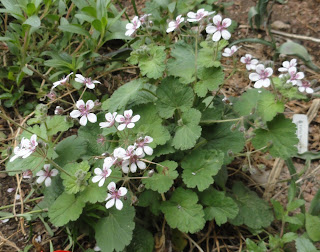 Few plants seem to have attracted more Latin names than this tasty morsel: Erodium trifolium, E. malviflorum, Erodium pelargonifolium, Erodium hyenoides and probably more...I hasten to say that it can be very spready by seed in some gardens. I find it very manageable in Denver--where our winters seem to keep it somewhat in check. The wonderfully hairy, rounded leaves are quite distinct from other Erodium, and the wonderful, two-toned flowers are distinctive and showy and very floriferous. Despite its obvious charm, it's annoyingly rare in cultivation. Why is that? 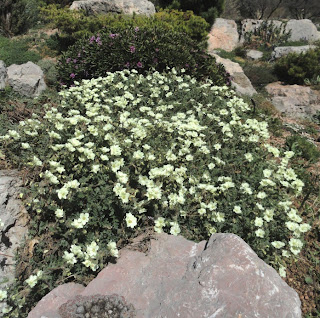 If there is one Erodium I would think deserves landscape use, that would have to be Erodium chrysanthum (or whatever this turns out to be: there is good evidence the commonly cultivated clone may be a hybrid). This plant, growing in the Rock Alpine Garden at Denver Botanic Gardens is well over 30 years old in that spot, and now is well over a meter across. It blooms as prodigally as any erodium, but in this case that wonderful silvery moonlight yellow color over a dense cushion of silvery leaves: enchanting! The Plant Select introduction program included this as a recommendation in 2011. 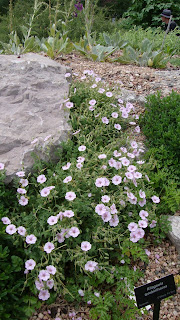 Here is a wonderful pale pink hybrid called 'Joy' that captures the elegance of the genus and combines it with some hybrid vigor. Here growing in the Rock Alpine Garden... 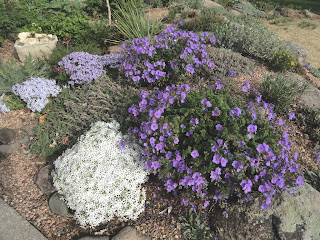 The gem of the genus has to be Erodium absinthoides ssp. amanum, from that fascinating mountain range on the border of Turkey and Syria where one may not want to go camping this winter. As you can see, this form (originally from Robin Parer, growing in Mike Kintgen's private garden) is an amazing blue violet color--and seems to have an even more protracted season of vivid bloom.

Strangely enough, there are still dozens of erodiums I haven't mentioned...some, like the popular E. reichardii (E.chamaedryoides) are not truly hardy in our Zone 6 gardens. Others (E. carvifolium) are superficially much like those I've shown. But others--(like E. sibthorpii, E. x lindavicum, E. manescavii, E. celtiibericum) have escaped my camera, or I would have included them. And let's not even TALK about the many outstanding hybrids. Gorgeous (and variable) evergreen foliage, an extraordinarily long bloom period, easy and adaptable in the garden, adorable closeup and yet having landscape impact: can you name another genus of plants that has all that and more?  Have I convinced you yet that Erodium is not the best rock garden plant genus, containing real garden riches?
- December 03, 2012