Going with the Phlomis... 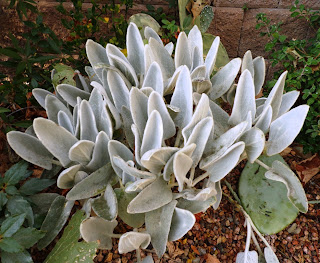 I realize this looks suspiciousliy like Lamb's ears--and the Phlomis are distantly related, it's true--but these fluffy, very touchable leaves are one of the innumerable "Jerusalem sages" that have barely entered cultivation, or have yet to do so...the Mediterranean is chockablock full of Phlomis--and strangely few are out there. This is one that Dan and I collected half way up the Sierra Nevada above Granada, little suspecting it would have such lovely, burnt orange flowers... 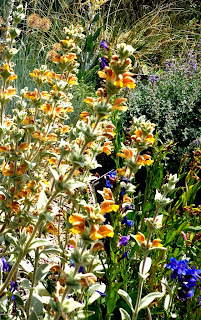 Which I have yet to photograph properly. I suspect if I take the time and photograph this in just the right light, it will get the notoriety it deserves. Dan has propagated dozens of plants which now cover a wide swath of the Watersmart garden, producing buckets of seed. Now if it would only do this in MY garden! 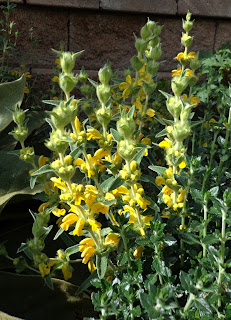 Here is yet another execrable picture of a fabulous plant, in this case Phlomis lychnitis--we managed to get only a little pinch of this at a high elevation on Sierra Mágina, a magical mountain in Andalucia. I shall never forget the day or the plants there: practically the whole mountain for miles was wall to wall Phlomis lychnitis--all with seedpods sticking up, and ALL were empty, except for one which had a few flaky black seed. I think only one germinated. and this one has persisted at DBG, and despite Mike Bone growing dozens of seedlings a few years ago from our home grown seed, it is still not being sold by K-Mart (in fact, I think we still just have one or two measley plants). It is really not so easy to introduce plants, no matter what the Plant Nazis say! 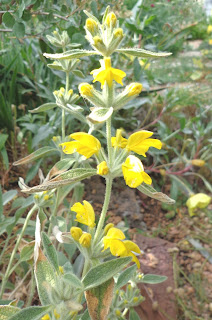 Here's a closeup of a dwarf Phlomis that Marcia Tatroe grows to perfection. Alas, it never produces seed (she says: I secretly think she's hoarding it and just enjoys watching me writhe with envy each spring when I visit). She keeps telling me the name, which I suppress. I think it is close to P. armeniaca--but truth be said, there are several dozen dwarf yellow Phlomis, one cuter than the next..
. 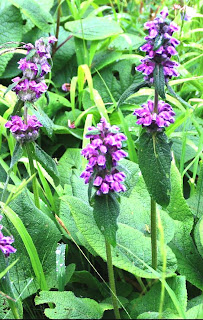 Here's my picutre of a very different Phlomis I took in the Tian Shan in 2010: it grows EVERYWHERE there, and also in the Altai: Phlomis oreophila has not proven as amenable as I'd hoped--although we collected much seed. I'm afraid we've been treating it too harshly--it does like alpine conditions and lots of moisture. I'm growing the somewhat similar Phlomis bracteata which I admired in Pakistan, so I hope we can finally tame this one: it is wonderfully wooly for much of its juvenile stage as it emerges in the spring....surely a plant this abundant and widespread in the wild will be growable? 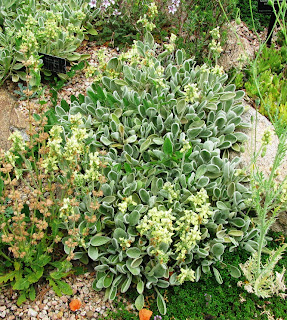 And then there is this little munchkin: I got this decades ago from an Index Seminum, and it has persisted cheerfully in the same spot in the Rock Alpine Garden. Truth be said, I'm not sure I trust the name: it looks so similar to a bevy of Sideritis I have grown, and come to think of it it could almost pass for Stachys citrina: that pale yellow color seems to be widespread in Mediterranean mints. I love this thing, but I have not researched it: the flower morphology screams Sideritis to me: I wonder if there's been a mistake? 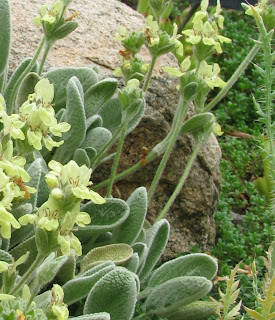 Is it not strange that such wonderful plants, with evergreen foliage (mostly) and a long season of summer bloom have not gotten more attention? I for one will not be content until I've grown every species of Phlomis on the planet, and then some!

I believe this genus has got to be one of the very best for xeric gardens...now to fetch the other hundred or so species we're still missing!
- December 15, 2012