Best in show cushions and buns 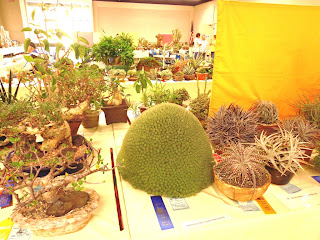 Rock gardeners are known for their interest in alpine cushion plants. Although succulents usually summon up images of fleshy crassulas or sedums, there are several succulents that can equal any alpine in their rounded, tight mounds. I photographed this amazing specimen of Deuterocohnia brevifolia (Synonym:Abromeitiella brevifolia), a bromeliad from the foothills of the southern Andes which makes a wonderful specimen in a pot. This specimen has apparently won many a medal for its owner, here shown at the San Gabriel Cactus and Succulent Show at the Los Angeles County Arboretum and Botanic Garden in Arcadia, California on November 3. Here it takes the first prize in Bromeliad division. (It was just one of over 800 incredible specimens in that show: Plant shows, sales and auctions are alive and well in California, let me tell you: I attended several in a week!) 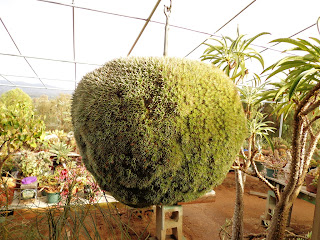 Peter G Walkowiak, a dynamic nurseryman who hosted me last week, and who owns and operates a spectacular nursery (HCI Services) in Escondido, California: if you look beyond the bromeliad, you can get a hit of the hundreds of other superb specimens that he grows as stock plants (and show plants too). Kind of like a permanent plant show in his back yard! This is just one of the hundreds of amazing succulent nurseries that make Southern California a Mecca for lovers of these plants. By the way, I have seen this bromeliad growing lustily out of doors at both the Edinburgh and also Kew's Royal Botanic Gardens: one fantasizes it might grow high enough in the Andes to be hardy in Denver...one can dream you know! 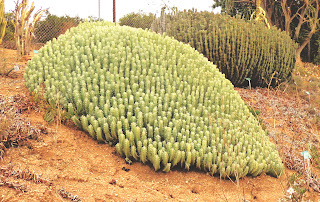 I admired Mike Kintgen's amazing pictures of Euphorbia resinosa, which forms vast colonies in the foothills of the Atlas mountains of Morocco. I was therefore thrilled to find this terrific clump--possibly six or eight feet across--at the University of California at Riverside's amazing botanical garden last week. 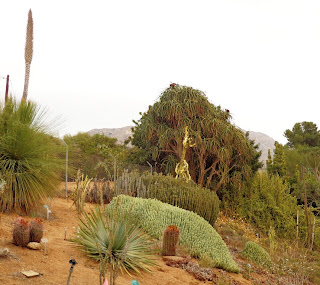 Here you can see the plant in better context, surrounded by cacti and other succulents in their extensive desert garden... 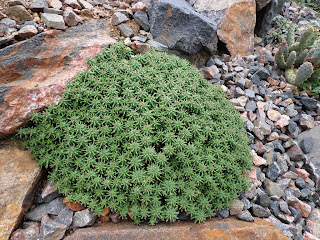 Feeling just a tad jealous of these immense succulent mounds in California, I must compensate by sharing this picture of Euphorbia clavarioides var. truncata I took last summer at Timberline garden where Kelly is growing it outdoors: this was grown from cuttings of plants he grew from seed from my collection in 1994--surviving all these years in Colorado!

Although this is a Euphorbia, this is also a bona fide alpine that would take pride of place in any self respecting rock gardener's collection, despite its emphatic succulence, bringing two of my great loves together in one plant. I went to California expecting many things, but finding enormous cushion succulents was not one of them!
- November 13, 2012