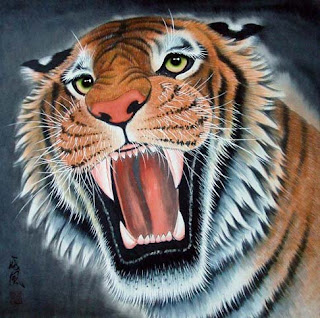 Sunday night Jan and I went to see "The Life of Pi"--which despite having rave reviews only had a dozen or so people in the huge theatre. I thought this Watercolor tiger painting (which you can purchase if you click on the hyperlink!) captured a bit of the essence of the movie--as well as Blake's classic poem at the bottom.  Richard Parker (the tiger in the movie) was the kicker for me: how the hell they could have done such an astonishingly perfect job of cyberartistry with this awesome cat? Apparently, the critters in the boat are all phony cyber creations, although they looked distressingly real to my eyes. I don't want to spoil your appreciation of this movie--it is well worth seeing on many levels. But I realized watching it that much of my life has been a struggle with my own personal tiger. Piscine (the protaganist) implies at the end that perhaps Richard Parker (the tiger antagonist) was in fact himself...I said the movie operated on many levels!
I've read two biographies of Bruce Chatwin, and they both mentioned Bruce's great interest in Dinofelis, a Miocene carnivore that appears to have specialized in eating our ancestors. The terror inspired by tigers in particular, may be a deep-seated human instinct inspired by millions of years of eluding (or trying to elude) the ironically named Smilodon. What if our intelligence came about as a direct result of "smarter" humans being selected because they found better ways to elude their ultimate predator and lived to procreate, passing on ever smarter genes?
I have a hunch that those increasingly smarter humans may have eventually developed methods to drive Dinofelis into extinction After all, paleontologists believe humans have driven dozens of other taxa of megafauna off the earth in the last tens of thousands of years through our extraordinary capacity for, well, let's be blunt--our mastery of destruction.
May I suggest (just as the "Life of Pi" seems to) that we are ourselves in fact the tiger. Until we manage to subjugate or at least grasp this fact that is. The tigers of ignorance and hate, greed and anxiety, guilt and fear are the creatures that drive so much of what we do from day to day. They do damage of course on their own, but also preoccupy us such that we do not attend what we should, something that may become an even greater predator in time, perhaps?
Let us hope we can somehow master that force within us--before we make all wild tigers extinct (not to mention the great bulk of other creatures out there that have not already been supplanted by Superstores, endless suburbs, shopping malls, farms and exurban wastelands).
And although the nearly extinct (or at least sputtering) Repugnican Party wackos would deny it, there is lurking out there a much bigger, much fiercer tiger than any of these (likewise our own creation--our own image, as it were projected onto an unimaginable scale): carbon emissions and the global warming they have set in motion are fiercer than any tiger you can conjure, although the eyes and teeth are not evident to reactionary pundits quite yet. Ironically, real tigers are composed mostly of carbon, come to think of it! How fearfully symmetrical!


The Tiger
By William Blake

Tiger, tiger, burning bright
In the forests of the night,
What immortal hand or eye
Could frame thy fearful symmetry?

In what distant deeps or skies
Burnt the fire of thine eyes?
On what wings dare he aspire?
What the hand dare seize the fire?

And what shoulder and what art
Could twist the sinews of thy heart?
And when thy heart began to beat,
What dread hand and what dread feet?

What the hammer? what the chain?
In what furnace was thy brain?
What the anvil? What dread grasp
Dare its deadly terrors clasp?

When the stars threw down their spears,
And water'd heaven with their tears,
Did He smile His work to see?
Did He who made the lamb make thee?

Tiger, tiger, burning bright
In the forests of the night,
What immortal hand or eye
Dare frame thy fearful symmetry?
- November 27, 2012