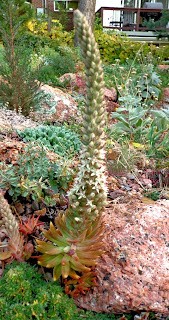 I've grown this Orostachys for many years, but this year it has performed overtime (a dozen or more towers arising here and there all over my garden. I believe it is O. japonica: the names of these odd little succulents are in something of a muddle. But whatever the correct Latin name may one day turn out to be, it is a welcome flourish to end the gardening season. I can't seem to put my fingers on a picture of Orostachys boemeri (a much commoner plant in gardens) which is also spectacular right now...perhaps it shall merit its own blog some day... 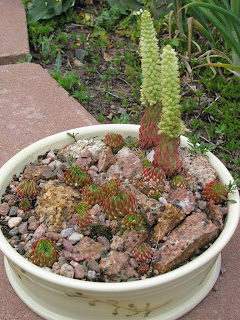 I obtained the species above from Royal Botanic Gardens, Kew--as Orostachys chanettii (which I assumed had to be correct, considering the provenance).  I have been told it is probably just Orostachys thyrsiflora, which in turn has been lumped with O. spinosa (see below). This blooms in June for me--much earlier than the superficially quite similar O. japonica. 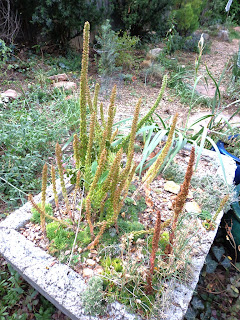 The picture above was taken this summer at Bob Nold's garden: it is the biggest colony of Orostachys minuta (which has also been lumped into O. spinosa--go figure!). Had Bob harvested seed, we could easily have grown several trillion plants from this little trough's worth of plants to carpet the entire hemisphere. The seed are miniscule.. 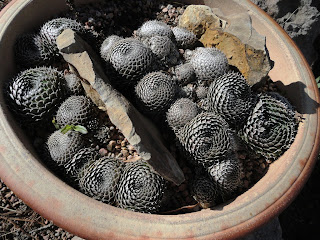 Here is the classical Orostachys spinosa--the form most often cultivated. I have blogged about this before... 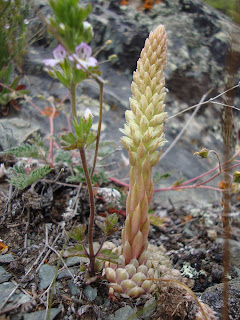 Quite distinct from this is Orostachys spinosa, which we found almost everywhere we stopped in the Kazakhstan Altai from the lowland steppe to the tundra. Orostachys have accrued an amazing number of common names--considering they're exotic:"little duncecaps", "pagodas" and of course the many variations on their Japanese common name (iwarenge)...I must have a dozen distinct species and hybrids, and would like to possess even more. Few plants add such a sweet little riff to the late season rock garden or containers. Try one! You'll like it!
- October 16, 2012