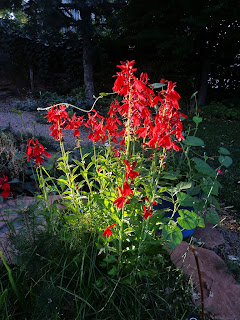 Scarlet letter, Scarlett O'Hara, scarlet fever, crimson tide--there is something about fire engine red that fulminates, that dazzles, and that calls to most of us (forgive me those who are color blind!) much as it does to hummingbirds.  The sin in this picture is no doubt the twining Ipomoea tendril I didn't remove. I do think this conveys that shocking impact that this plant produces early in the morning when I look out at my garden and a random sunbeam piercing through the giant Scots Pines ignites that beacon of late summer. See next! 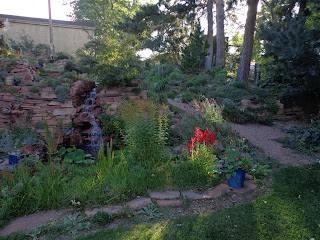 Backlighting is of course effective at all times of year--but something about the declining light of late summer that makes things shine and glow with special fervor. Denver Botanic Gardens is full of brilliant color that makes a late afternoon visit a positive feast of backlight (try it!), but all of our gardens have vignettes like this that provide those little epiphanies through the days that are the very fragrance of our lives. Alas, they also lead us into a thicket of mixed metaphors.

Oh yes, the plant is a hybrid between Lobelia fulgens and Lobelia cardinalis (a subspecies of which even grows in Colorado!). Lobelia fulgens itself is rather tender, but its northerly cousin (L. cardinalis) is very tough. The range of the latter in nature amazingly and coincidentally almost entirely overlaps with that of cardinals (Cardinalis cardinalis), one of the most dazzling native birds of the eastern United States extending into the Southwest. Nature can be very witty. The first few years I grew it, this hybrid strain was nearly 5' tall. Now, ten or more years later it is just a few feet tall, but every bit as dazzling. 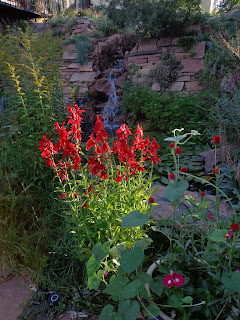 For the heck of it, I am including a picture of the plant taken in two very different lights: immediately above is at 6:00AM yesterday (August 30), and below a picture taken a week or so ago on a cloudy afternoon...it's just as brilliant in the oblique light, in a way--just not quite so...so....over the top? 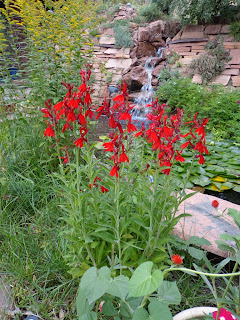 Fiddlesticks! Cardinal flowers are always over the top...this plant has been elected as the very Pope of my garden when it comes to spectacle this week. Allelujah!
- August 31, 2012